These new crocs are so popular they sold out days after it was released. 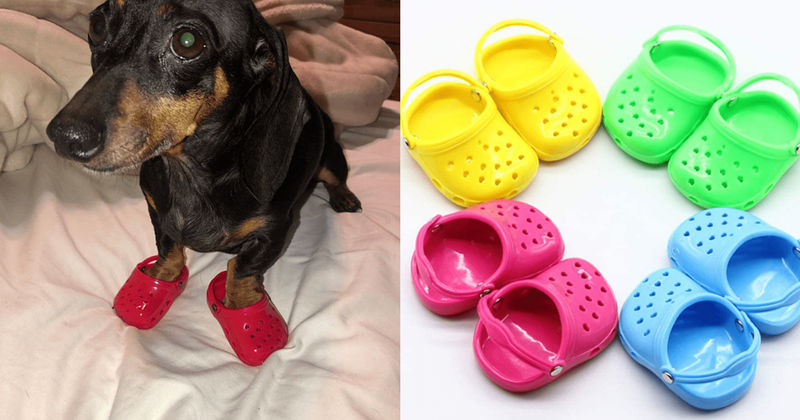 Crocs happen to hold two of the greatest honors when it comes to footwear— one, they're by far the most commonly used footwear, and, two, they're also the ugliest of its kind the world has ever seen. But, as they say, looks can be deceiving. Despite being an eyesore, they are undeniably comfortable and last for such a long time, the best way to get rid of them is to just throw them away. This brand called GEHARTY realized that pet owners have always been longing to share this comfort with their pets. And so they've come up with Crocs-inspired shoes for dogs that look beyond adorable, Mental Floss reports.

Like the Crocs we're used to, the dog versions are also soft, flexible, and come in a variety of colors such as pink, green, blue, and yellow. Another design aspect that makes your heart melt is that the holes on top of the shoes are tiny and heart-shaped. In terms of size, each dog-Croc measures 2.76 by 1.15 inches, which means the footwear is designed to fit tiny paws. So, if you're searching for the comfy goodness for your larger pooches, we're sorry, you're gonna have to look elsewhere. Also, the designers have a special warning for you - it's not intended to be worn when your dog is walking or running around. However, if you want to make them look cute and comfortable when they tippy-toe around the house or want to grab cute pictures of them -- this is what you've been missing all along.

Per Simplemost, the Crocs for dogs were last seen selling on Amazon starting at $13. But, after images of the product went viral on social media, they quickly sold out, which means you're gonna have to wait while the manufacturer replenishes their stock. In the meantime, here's another fun dog accessory that's equally cute. Considering most of the country is still reeling in the aftereffects of an unforgiving winter, these leggings are sure to keep your pooch warm. Designed by a company called Walkee Paws, the leggings are trendy and protect their paws from the harsh winter conditions. Each pair starts at about $36.99 for both indoor and outdoor styles and you can get them in a variety of styles called: CoCoa, Camo, Confetti, and Classic.

Describing the product, the makers write: "Walkee Paws are waterproof leggings for your four-footed friends, protecting them from the elements, germs, and chemicals on their everyday walks. At Walkee Paws, we’ve fashioned a new way to make walks even more fun, with fetching designs that are easy to wear and protect your pooch from all the ruff stuff outside."

Lisa Baronoff, the founder of Walkee Paws, is thrilled with the product she claims is inspired by the pantyhose. "My incredible team developed a four-way stretch fabric, along with a clever tightening tool that prevents Walkee Paws from falling off, while also remaining comfortable for the dog," she writes. "Next came the waterproof paws. We knew we wanted the material to be lightweight and thin enough so that dogs could still feel the ground and walk more naturally, but it also had to be durable enough to withstand water, pavement, snow, and the general wear-and-tear that comes with outdoor walking."