The hack was shared by Hannah Ian - one half of the professional organizer duo Store Simply. 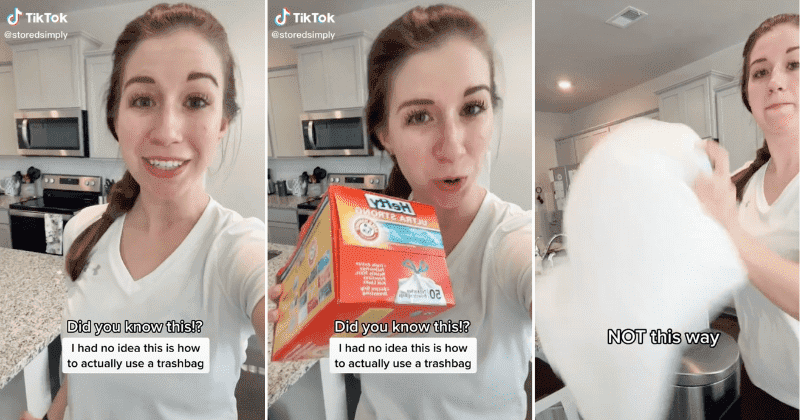 A Georgia woman's TikTok hack has erupted a debate on the right way to line our bins with trash bags. Hannah Ian—part of the professional organizer crew Stored Simply with Lydia Amerson— recently shared a video on the social media platform telling people how she discovered she'd been using trash bags the wrong way throughout her life, ABC News Go reports. Though many thought Ian was simply creating much ado about nothing, some believed she may just be right after watching her 44-seconds-long video. In the clip, Ian shows that the bags are packaged inside out and so what we're supposed to do is put the bag on a garbage can "like a hat" rather than fluffing it before inserting it. She then went on to demonstrate her theory by partially opening a trash bag and placed it over the top of the can. Once it is taut, she presses the bag down to line it around the can.

The video has garnered over 11 million views on the platform with many users sharing that they were unaware of the hack and that they were indeed doing it incorrectly all the while. However, there were also a few who refused to be swayed and stood firm on their old method citing their reasons. "I prefer the aggressive behavior of doing it the wrong way. It makes me feel better," a user named Kitty wrote. "But then, how will my wife let me know that she's mad?" joked another user. "If you shake it down loudly, it scares the cats, which can be fun," commented a third.

Speaking to Good Morning America about the overwhelming response to their video, Amerson, said: "It's really relatable, and it also stirs up controversy because people don't always think there's a right and wrong way. Most people were saying, 'This is dumb' or 'Wow I never knew this. I've been doing this wrong my entire life.'" She went on to explain that the method can actually work on all garbage cans except for those without a hole in the back because they could cause an air pocket to form in them. Ian, the stirrer of the mild controversy, added that she decided to make a video of the hack to share it with the duo's 138k followers on TikTok after she came across it online.

The two thanked commenters and their continuous chatter for making the video go viral. "People got opinionated about it and it's not super controversial so I think that leaves a little bit of lightness into the conversation," Ian shared. Both Ian and Amerson met when working in marketing for a company, which they ditched to launch Stored Simply in 2020. In less than a year, the pair have managed to consult with plenty of clients including working parents on time-saving organizational tips.