Tessica Brown, who posted about the entire ordeal on social media, tried washing off the glue 15 times but it still held on to her hair. 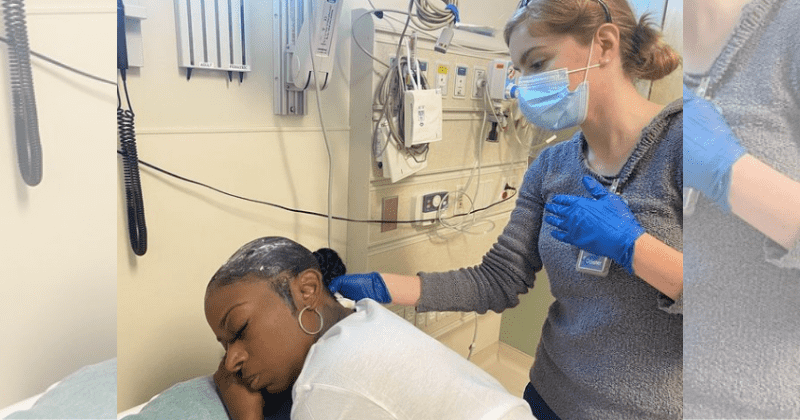 A woman put an extremely powerful adhesive on her hair instead of hairspray and had to get herself admitted to a hospital. She used Gorilla Glue which she said held on to her hair despite washing it numerous times. The woman from Louisiana, Tessica Brown, posted her ordeal on social media which soon became viral. In a clip she originally posted on the video-sharing app TikTok, Brown said, "My hair, it don't move. You hear what I'm telling you? It don't move. I've washed my hair 15 times." She shared another clip where she was seen washing her hair but the soap and water were of no help. In an Instagram video, Brown revealed she used the glue because she ran out of her regular hairspray and called the decision a "bad...bad...bad idea." According to her, her hair was stiff from the glue for a month despite trying to remove it.

She warned her followers never to use Gorilla Glue if they ran out of their hairspray. Soon, Gorilla Glue got to know of Brown's situation and reached out to her on their Twitter account with a message: We are aware of the situation and we are very sorry to hear about the unfortunate incident that Miss Brown experienced using our Spray Adhesive on her hair. This is a unique situation because this product is not indicated for use in or on hair as it is considered permanent. Our spray adhesive states in the warning label "do not swallow. Do not get in eyes, on skin or on clothing..." They reiterated the glue was: for craft, home, auto or office projects to mount things to surfaces such as paper, cardboard, wood, laminate and fabric.  We are glad to see in her recent video that Miss Brown has received medical treatment from her local medical facility and wish her the best.

Brown posted a number of pictures of her being treated at the St Bernard Parish Hospital.  In the FAQ section of the company's website, Gorilla Glue mentions steps to remove the glue from surfaces. This includes cleaning the surface while the adhesive is still "wet/ uncured" and then wiping it off with a dry cloth. "Isopropyl alcohol (IPA)" can also be used for removal. The website, however, mentions only steps to remove the glue from a person's skin and not hair. "While still wet, Gorilla Spray Adhesive can be removed by wiping adhesive with a dry cloth, and then washing the area with soap and water.  Once cured, rinse well with water," it stated. Brown's story also reached celebrities such as Chance The Rapper, who took to Twitter to wish her well.

He stated: I’m glad mfs actually supporting her thru this. When I watched the video the second time it was hard to laugh cause I could tell shorty genuinely didn’t know she had put one of the worlds most powerful adhesives in her shit. I hope she recovers well. He used the hashtag #gorillagluegirl with the tweet as the hashtag had been trending on the microblogging platform. Many others on social media were not so gracious. Twitter handle @SredniEel wrote: Maybe if she had read the warning label on the bottle, she wouldn't be in this mess. Sorry, but I'm having a lot of trouble mustering sympathy for someone who put PERMANENT INDUSTRIAL ADHESIVE IN HER HAIR. I mean, at least it worked as advertised. But most comments were hilarious in nature. Twitter handle @rudeboy_junda wrote: My hairline can’t recede if it can’t move. Thanks #gorillagluegirl

In an Instagram post, Brown thanked everyone who prayed for her and wished her well during her ordeal, and sent "virtual hugs."