The 23-year-old coped with the death of her father by updating him on her life, on a daily basis for 4 years. 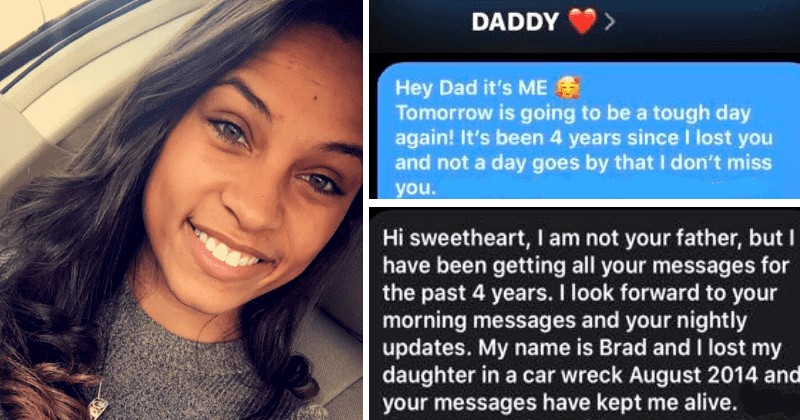 It's been four years since Chastity Patterson lost her Dad and the 23-year-old has been coping with his absence by texting him every day. On the eve of her Dad's death anniversary, Chastity Patterson sent an emotional message to his phone number to tell him how much she missed him but she was shocked to receive an equally emotional reply from her Dad's number, according to a report by Mirror.  The stranger, who identified himself as Brad, replied saying her messages had touched him deeply as he had lost a daughter in a car crash. The stranger didn't want to intrude on her daily ritual and never replied until now. "I lost my daughter in a car wreck in August 2014 and your messages have kept me alive," he wrote.

Chastity Patterson of Arkansas shared screenshots of the texts on Facebook, writing: I text my dad every day to let him know how my day goes, for the past four years! Today was my sign that everything is okay and I can let him rest! The 23-year-old got some closure on the death of her father, Jason, after getting the reply. The post went viral with Facebook users sending her heartwarming messages while many opened up on their struggles of coping with a loved one's death. Patterson revealed in another post that Jason was her Stepfather but the pair had grown incredibly close. "Jason was not my "biological" father, but blood could not make him any closer! I have known him my whole life and when I was old enough to go to the Skating Rink, I did every weekend!" recalled Patterson.

In her text to her Dad's phone number, she wrote, "Tomorrow is going to be a tough day again! It's been four years since I lost you and not a day goes by that I don't miss you." Patterson, who recently graduated from college, updates him on her life, her fight with cancer and about finding love. "I beat cancer and I haven't gotten sick since you were here like I promised you I would take better care of myself!" reads Patterson's text. She then writes about how she's not ready for marriage, "I'm afraid of marriage because I'll have to walk that long aisle alone and you won't be there to tell me everything will be okay," reads the text. She concludes the text, writing. "I just wanted to say I love you and I really do miss you!"

The following day, on her Dad's death anniversary, she got a reply from a stranger saying he had been receiving her texts for 4 years and how he considered her texts as a "message from God." Brad said her messages helped cope with the death of his daughter. "I'm sorry you lost someone so close to you but I have listened to you over the years and I have watched you grow and go through more than anyone. I have wanted to text you back for years but I didn't want to break your heart. You are an extraordinary woman and I wish my daughter would have become the woman you are," reads the text from Brad.

She opened up about her father in a separate post, writing, "He never missed a school dance, prom, my games and YES he would give me long talks about my mouth and attitude. I had to introduce my boyfriends to him (If I was allowed to date) and he would act like a normal dad and give us the long talk. I've cried with him, told him everything and even became very independent because he took the time to love me and show me what happiness looks like. SO YES Jason was my father but he was a role model for many kids in our town," wrote Patterson.

Following the overwhelming response to her post, she wrote: I would like to thank everyone for the kind words. I just wanted my friends and family to know that I was okay and this year wasn't going to be hard for me. To everyone that has messaged me images, letters, and their kind words, I can say that everything is okay and there is nothing wrong with grieving how I did. Love the people you have now and tell them EVERYTHING, because when they are gone it will be too late to say sorry or how you really feel.