The feat of Makenna Myler, 28, running on a track in California was captured by her husband who then posted it on his Instagram account. 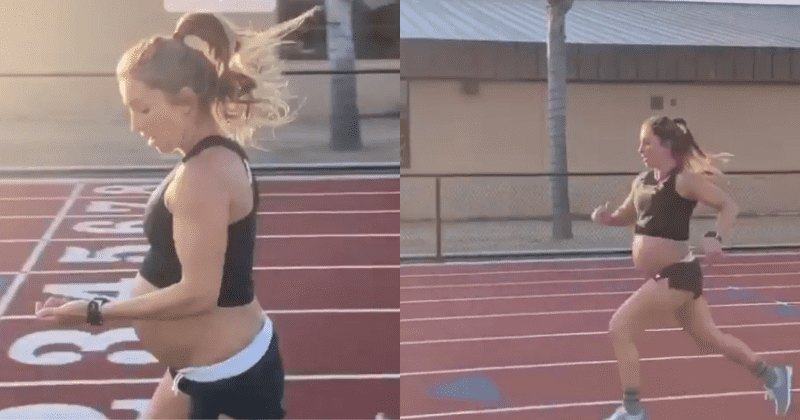 A woman running one full mile in under six minutes while heavily pregnant is truly an impressive feat, it's no wonder it has become the latest toast of the internet. The video was posted by the woman's husband on his Instagram page and it soon got widely shared on other social media platforms and picked up by media outlets. Makenna Myler is 9 months pregnant and due to deliver in a week. In the video posted by her husband, Mike, on his Instagram page, his wife is seen running four laps around a race track. The post is captioned: "Someone check the Guinness stats. My wife is an absolute champion. #nikematernity." Mike explained that he had made a bet with his wife—if she ran one mile within eight minutes he would pay her $100.

The 28-year-old won the bet by a significant margin while also achieving wide internet fame. A report in Runners World revealed that Makenna is originally from Australia but lives in California. The 28-year-old runner told her husband that despite being pregnant she felt she would be able to run. Her earlier best time running a mile was 4:43 minutes. Now at the end of her pregnancy, she managed to pull off the feat in an impressive 5.25 minutes. She told her husband that she could run the distance in around seven minutes. Mike raised the bets while also putting down the condition for the same. At the end of the video, the two are seen embracing, and Mike is seen congratulating his wife.

Speaking with Buzzfeed, Makenna said she had cut back on her mileage and had been a lot slower during her pregnancy. "I have been very particular with my strength training to make sure my pelvic shift and added weight doesn’t cause any injury," said Makenna. As her pregnancy progressed, she was nervous about running although she wanted to do it badly. When her doctors said it was okay, she just did it. She told the publication further that “a sense of power is everything to me." Makenna added, "Running was a great outlet for me this way. Running during pregnancy was a beautiful process for me, from accepting effort and patience, not forcing the body into anything, and giving up on trying to achieve a certain rate or A certain distance."

A lot of women were absolutely blown away by the video. Shannon Heiden Ordonez hilariously commented on Facebook: Yikes that is impressive. At 9 mos pregnant I just wanted to lay in front of the tv and try to breathe without peeing on myself. The only thing that could get me to run the mile that fast these days is the thought of being pregnant again. I could run pretty fast to avoid that I think. Others, like Ester Vargas Pipersky, were cautious in their comments but undoubtedly impressed: My only concern is if she fell, and that poor baby is bouncing around, I hope the baby will be ok. I’m not educated on pregnant women who workout into the last trimester, not much I can say. To each his own. That baby will come out running. Wishing momma, baby, and the daddy all the best.

"I hope I can give inspiration to all the women starting family or thinking of starting a family. You can do anything. It's about who you are and why you started in the first place," - Shelly-Ann Fraser-Pryce.