Woman Makes Ice Cream Punch In A Toilet, And People Are Disgusted

She even served the guests straight from the bowl. The full three-minute long video has since gone viral. 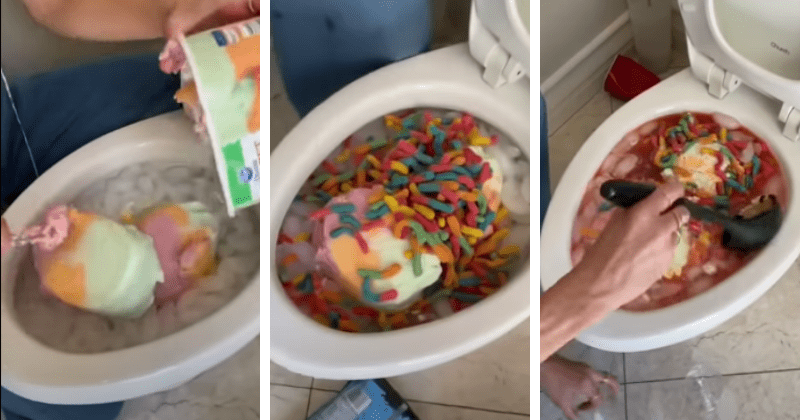 Of all the weirdest things we see on the internet, this one is by far the "shittiest" thing we've come across. A video of a woman making ice cream punch in a toilet bowl has gone viral. The nauseating clip was originally posted on Facebook by The Anna Show, and showed a young woman, making what they described as "DIY punch trick...great for parties!" The video shows the woman filling up her toilet bowl with ice after stuffing a tie-dye shirt into the drain hole. Later she dumps sweets and ice cream in it. She completes this "party punch" by adding Sour Patch Kids, Airheads bites, fruit punch and Sprite, and flushes the toilet for the punch to come to life. The fizzy pop submerges the sweets and the ice cream. After this, she uses a soup ladle to serve up some glasses. She then goes on to serve the toilet ice cream soda slurry to guests...YES, she did! Take a look at the horrendous concoction in the video below!

Before you freak out, there's a good chance that this may have been a prank. According to Garbage Day's Ryan Broderick, the video was created by Taylor Watson. Watson is a musician who also appears to be part of a Facebook prank network, reports LAD Bible. But it remains to be seen if the people who drank that awful concoction were actors or poor unsuspecting victims. Kimberly Smith commented on Facebook saying: You noticed they didn’t taste it first.   they took straight out to their friends. Samson Bonkeabantu Brown joked:  WHERE THE HELL DO Y'ALL USE THE BATHROOM DURING THE PARTY ANNA? HUH? WHERE!!???? Here's what others had to say about this ghastly punch:

thank you for sharing this, i haven't seen a video that made me involuntarily scream 'NO' at the screen for a while and this really hit the spot

I just watched that video of that person creating a punch? w/ ice cream and gummies in a toilet and I just don't understand why. If I went to a friend's house and they were like, "Hey, we made punch! Come and scoop it out of the toilet!" I'd leave immediately and never go back.

i mean honestly. from the fact that all that is in a toilet to the total waste of food/sodas pic.twitter.com/yjvD9rJGfS

Not wasteful, as you can see, they will be drinking from it 😂😂

Why did I watch the whole thing pic.twitter.com/UadNEzbbTC

People years ago: One day we're going to have flying cars

The post went so viral that even celebrities reacted!  Musician Lil Nas X shared his two cents on the matter:

me getting caught eating the leftovers after they leave the house pic.twitter.com/qDtQcQly71

Apparently, there's a restaurant in Taiwan that serves food in toilet bowls! But they're mini-toilets so they aren't as nauseating. But why would anyone want to eat from anything that resembles somewhere you do your business in? According to NY Post, Modern Toilet restaurant serves thick scoops or should we say turds of chocolate ice cream to steaming portions of curry dished up in a mini lav. A toilet-themed restaurant opened in Los Angeles as well back in 2013. The awful-sounding menu featured items like Constipation (noodles with soybean paste) and Smells Like Poop (braised pork over rice). We think we'll pass.