Nafiah Ikram, 21, a college student, was on her way home when an unidentified man threw acid on her on March 17. Police are looking for a suspect. 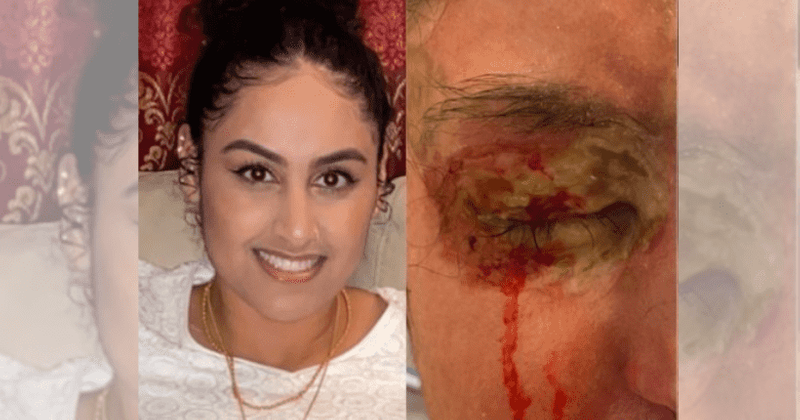 Trigger Warning: The story has details and images of an acid attack that readers may find disturbing

A woman in New York was attacked by an unidentified man who threw acid on her face, severely injuring her. The Nassau County Police Department has opened an investigation into the unprovoked attack and has asked the public for help. They offered a reward of $10,000 initially and then increased to $20,000 for any leads that could help nab the criminal. Nafiah Ikram, 21, is a student of Hofstra University and was on her way home from work. A report in CBS New York stated, she had just parked the car and noticed the attacker from the corner of her eye as she walked. He then ran towards her and threw the acid. All this took place on March 17. The suspect is 6.2 feet, skinny-build, and is believed to have used a red 2013-15 Nissan Altima to flee. He was wearing a black hooded sweatshirt and gloves at the time of the incident.

Ikram told the channel: “My whole life changed in a matter of five minutes. We don’t realize what we have until it’s gone.” She suffered burns on her eye, face, and throat. She added, “I started to cry and, like, I was panicking. I was like, ‘Dad, someone threw something in my face!’ And he was like, ‘Oh my God, it’s acid.'" The acid has cause damage even to her eyesight. "I can just see colors, but that’s it,” Ikram said, while adding she did not know why she deserved this. “I want to know, like, what’s the reason? Like, what could I have possibly done to somebody?” Sheikh Akram, her father, said, “She was in the hospital for three weeks, and she’s still not able to eat properly. She can’t see anything good. Only one eye is working.” Ikram's mother, Sherina Mohammed, added, “It’s been a horrible nightmare for us.”

UPDATE- the reward for information regarding the assault with hazardous liquid seriously injuring a female victim, has been INCREASED to $20,000. Call 1-800-244-TIPS or visit https://t.co/vIqYk5Fb1b
All tips remain anonymous pic.twitter.com/dLXDC5sKFj

Even Ikram's father is confused as to who might be the attacker. “That is the big question because she don’t have any enemies. We don’t have any enemies,” he said. The family does not believe it is a hate crime but is nevertheless fearful. “What happened to her, we are hoping and praying this doesn’t happen to anyone else,” said Ikram's father. Sherina added, “No amount of money in this world will replace her vision. Anybody who has a clue, be a human being and come forward.”

A GoFundMe page was also started for Ikram that has already collected $420,654 as of Friday. But her medical costs may be astronomical. The page highlighted the injuries caused to Nafiah. "The unknown attacker knew how dangerous the acid was as they were seen on camera wearing gloves. The attacker used a dark brown acid known to cause blindness and severe burning," it read.

Nafiah Ikram and her mom were getting out of the car at their home when a man rushed up to her, threw a caustic liquid at her face and ran off.https://t.co/ps9lDYuH35

"Had the acid gotten into Nafiah's lungs she would have died. When Nafiah screamed it caused the acid to go into her mouth, burning her tongue and throat, which prevented her from breathing. When Nafiah ran into her house and her parents saw her, they immediately tried to help her, but in the process the acid burned their hands and forearms as well. If her parents were not home to help her and call 911 right away she would not have made it. The acid caused severe burning on Nafiah's face, eyes, chest, and arms. Nafiah was wearing contact lenses that night and the acid melted the contact lenses onto her eyes. We don’t know if Nafiah will ever regain vision again," the page added. The amount will go into paying the "medical expenses not covered by insurance, home security, legal fees, and loss of income as Nafiah and her mother are out of work during this time."

There was an outpouring of support for Nafiah from the public, including celebrity chef and former model, Padma Lakshmi, who made a video speaking about the issue on her Instagram page. She called the victim a "family friend."