Yacedrah Williams' eye had to be pried open by the doctors who also removed her glue-encrusted contact lens that saved her eyesight. 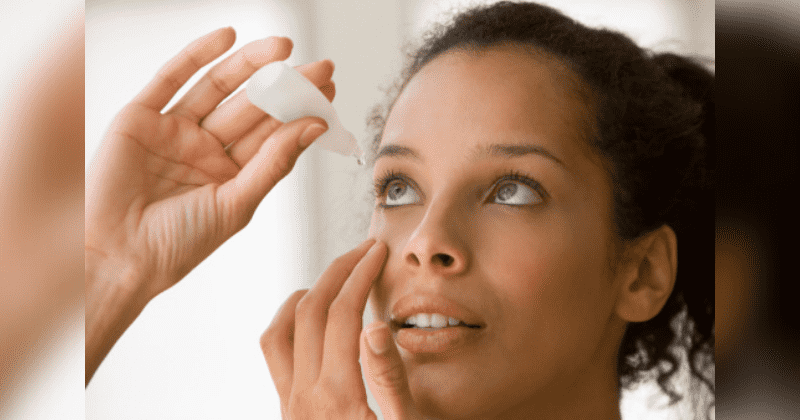 A woman almost lost her eyesight when she accidentally glued her eyelids shut by using nail glue instead of eye drops. Yacedrah Williams from Michigan went through the horrifying experience last week and is just thankful her eyesight is still intact.

The night of the incident, Williams woke up in the middle of the night and felt her eyes had dried. She realized she had left her contacts in before falling asleep and wanted to take them out. So she reached into her purse in her groggy state and pulled out what she thought was her eye drops. She squeezed the liquid into her eyes and realized it was the wrong bottle.

A Michigan woman nearly lost her vision after mistaking a bottle of nail glue for eye drops: “I tried to wipe it away and it sealed my eye shut.” https://t.co/INRu2YhfEJ

"I was like, 'Oh my goodness.' It dropped in my eye, and I tried to wipe it away. It sealed my eye shut," Williams told WXYZ. She had used the adhesive glue used to broken fingernails instead of eye drops. "I just started throwing cold water [on it], and I was trying to pull my eyes apart but couldn't," she said. She then started screaming for her husband, Derrick to call 911 because she had just glued her eyes shut. "She went into a panic," her husband said. "I tried to keep her from panicking but then I said, 'Derrick, this is in her eye, not yours.'" Turns out her immediate response to splash her eye with the water turned out to be a good decision after all.

Yacedrah Williams woke up with dry eyes, so reached for her purse for her small green eye drops bottle, but accidentally picked up her nail gluehttps://t.co/tVM1zwJG9D

"If you ever get anything in your eye, the immediate thing to do is try and flush your eye out," Dr. George Williams, an ophthalmologist at Beaumont Health in Royal Oak, Michigan stated. He suggested holding your head under the faucet and allowing the running water to clean your eye. "You'll make a mess but you may save your vision." But this wouldn't exactly be possible in Williams' case since her eyes were sealed shut. After she was rushed to the hospital, the doctors were able to pry her eyes open. They also took out the glue-encrusted contact lens.

"They said that actually, the contacts saved my vision," Willians said. "They had to pull on it and flip the top of my lid." The only casualty of this ordeal was a few eyelashes that were pulled out. Otherwise, her vision is completely fine.  After recovering from this experience, Williams has vowed to never keep both her eye drops and nail glue together in her purse ever again. "I don't think I'll even have nail glue anymore," she added. No one can blame her and also serves us all as a good reminder to check what we're putting into our eyes before actually putting them in. But she wasn't the first person to do this since hospitals handle cases like this more often than one would imagine.

A 64-year-old man had done the same thing nearly three years ago. He used nail glue instead of his eyedrops, just like Williams. The British Medical Journal included this man's accident as part of a study about cases like this where superglue was mistaken for eye drops. The study found that more than 15,000 cases like this have been taking place since the 1980s. "During the 1980s, the popularity of acrylic and artificial nails increased on a global scale and the use of ophthalmic style plastic dropper bottles for cyanoacrylate adhesives became a feature of the kits used to attach the acrylic material to the consumer’s native nail," the study stated. "Correspondingly, household do-it-yourself kits also utilized this new convenient form of superglue packaging, further contributing to its common presence in the home of the consumer over the last 30 years."