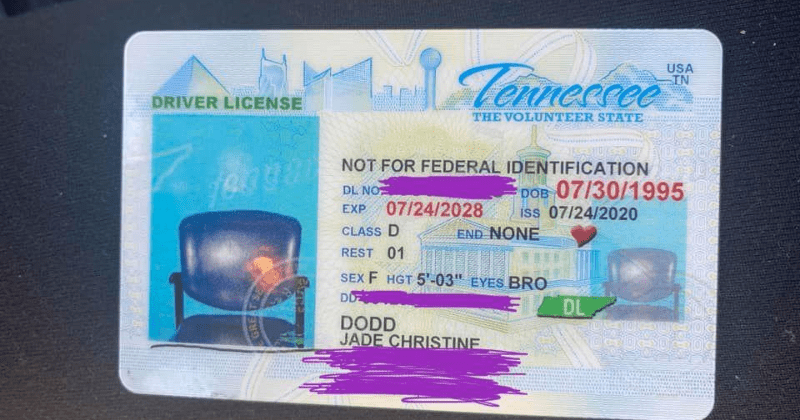 A driver's license marks a momentous occasion in one's life. However, most of the time the picture printed of you for said license might ruin the joy of having earned this new sense of independence. The picture of you may look nothing like what you see in the mirror every day. It may look like you are a completely different person entirely.  And if there are derpy faces in the license, it would mean having to wait for at least four to five years to be able to fix it. Now, imagine getting your driver's license back and seeing a chair where your unrecognizable face should have been.

Well, that is exactly what a woman from Tennessee got in the mail. Jade Dodd shared the hilarious clerical error on her Facebook. In the viral post, she wrote, Currently on hold with the DMV since this is what I got in the mail when I renewed my license; and attached the picture. "I was with my Mom and we were going to eat lunch and I said, 'You need to see this, this isn't right,'" Jade Dodd told WKRN. “The lady at the DMV did not really believe me when I was like hey, I need my license fixed,” Dodd said. “Then, she looked it up in the system and goes, ‘oh, I need my manager for this.’”

Dodd said that her co-workers are having a field day out of this. She said, “My boss thinks it’s funnier than anyone. I was at work Friday and he pointed to a chair outside of his office door and was like, ‘I thought this was you, I waved at it this morning’ and I was like thanks.”

People of the internet have obviously made the most out of Dodd's misfortune as well, with a barrage of memes. These memes include the chair doing typical things a teenager does on getting a license which includes going for a drive, voting, and buying beer. “People have been sending me memes that they made and telling me happy late birthday,” she explained. “It’s been weird.”

The Tennessee Department of Safety and Homeland Security told CNN the error happened when the wrong image was captured and saved to Dodd's profile. They said that this is the first time something like this has happened. Wes Moster, director of communications, said in a statement, "When the customer visited the Driver Services Center a few years ago, during the transaction, an examiner made an error by capturing and saving the wrong photo (of an empty chair) to the customer’s profile. When the customer recently renewed her driver's license online, she received an image of a chair because that was the last picture taken on the file."

The statement continued: "When the Department was made aware of her situation, we immediately made things right with the customer and provided her with a license with her actual photo and have addressed this situation internally."

Dodd thinks the whole thing is funny as well and that this mix-up helped lighten the mood because of everything going on due to COVID-19. “One of my co-workers was like keep it in a picture frame, you can use it as a wall decoration and it’s a conversation starter when you have dinner,” Dodd added. She has already received her new license.

A Tennessee woman's driver's license photo was accidentally replaced with an image of a chair https://t.co/vV3ni8x7qs pic.twitter.com/IZuViqZqwA