The late teen's family was appalled by the woman's actions. 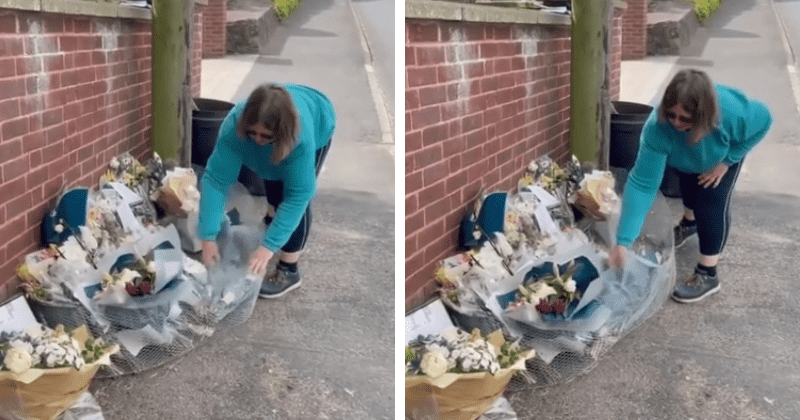 A UK woman has been called "heartless" after she removed floral tributes from the memorial for 18-year-old Vinnie Davis, who died in England's East Devon district on May 26 when the car he was a passenger in crashed into a wall. A friend of Vinnie's asked the woman, known as Brigitte Graham, to stop dismantling the floral memorial which had been left in memory of the late teen. The woman allegedly did not give a clear reason as to why she was throwing the cards and flowers for Vinnie into the trash can, reports Devon Live. His grieving family was appalled by the woman's actions and called her both "callous" and "heartless." Footage of her actions was shared on Reddit.

Brigitte has since explained and apologized for her actions saying, "I shared the outpouring of grief that followed the shocking death that happened outside our homes on May 26. The flowers and messages left at the site expressed the communal sorrow experienced by myself and my neighbors. After three weeks the flowers were dead which gave the impression that somehow this tragedy had been forgotten. It has not been forgotten. I therefore removed the dead flowers, kept all the messages from friends and family and attached them to the pole so they can continue to be read. I did this because I cared. I can only apologize for any upset this has caused. If the general feeling is that the flowers should be replaced I will do that immediately."

Isn't there an unspoken rule that we ask understand to leave those little memorials alone.
Like, deep core human nature sort of unspoken understanding...

However, Vinnie's family was not convinced by Brigitte's statement. They have instead decided to focus on thanking local residents who have gone above and beyond to help them during their difficult time. Vinnie's family and girlfriend Jessica Burt said: "Vinnie died two weeks tomorrow, not three weeks ago when he was alive and well, with us and not just in our hearts. We laid some flowers the next day after his death, but the bulk of the flowers were driven up by family and friends on Saturday. Residents did demonstrate compassion and sorrow, and allowed us the use of toilets, refreshments etc, and offering their land for us to use as a memorial. They also offered to keep the flowers watered and tended as we live nearly two hours away. Brigitte Graham was not to be seen. Most of the flowers that we laid on Saturday, May 29, had their own source of water and were stood in boxes. You can clearly see that they are not dead. As for Brigitte's statement that we had 'forgotten the tragedy' that stole someone so special, we find this comment and the removal of flowers to be callous, vindictive and heartless. The family would like to thank the local residents that were so kind and it is such a shame that one member of the community has overshadowed some amazingly kind and considerate people. She continued, "We would like to thank those residents, particularly those that support us and Vinnie. We have found the actions of Brigitte totally inexcusable. We only hope that the messages on the post are still sealed so we can read them when we are ready."

That is absolutely repulsive. I just don't understand what makes some people act they way they do.

As for Brigitte, she was, previously, a candidate in the Devon City Council elections in early May where she claimed, "As a resident of East Budleigh, I will listen to the needs and concerns of the residents of the constituency. I will oppose unnecessary house building, especially on green field sites, create a more integrated approach to social care in the community, support small business, and help them where possible to expand into new markets, promote proper road repair, strongly support the correct maintenance of our roadside verges and hedgerows." Looks like local residents and even people from around the world aren't too pleased with her actual actions.