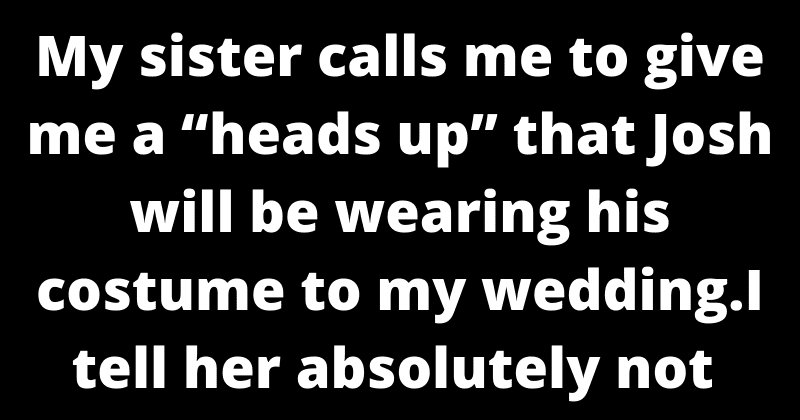 People spend months planning their weddings and want everything to be perfect. Without a doubt, it is one of the most special days in a person's life. So naturally, if things don't go the way they want, feelings of joy and happiness is replaced by discontent and bitterness. One bride-to-be, who was super excited for her big day, wrote about a particularly peculiar problem she was facing that involved her autistic nephew and his Spider-Man costume. She did not want to come off as a totally insensitive person and a "douche." But at the same time, she did not want her wedding day to be ruined because of her nephew. The bride wrote on Reddit she was at her "wit's end" trying to come out of the situation without any feelings getting hurt and relationships being broken.

She wrote: I am getting married in one week. We’ll call him Josh. My sister has a son who is 7 and on the spectrum. We asked to have him be a ring bearer months ago, they both agreed, everything is happy. Fast forward to today and my sister calls me. Apparently, Josh has taken to wearing a Spider-Man costume and will not take it off. The costume, according to the woman, became a source of nightmare for her. The boy would not take it off, even weeks after he got it and he would throw tantrums when he was asked to do so. The worried woman added: It’s been weeks and he throws an absolute fit when asked to wear anything else. It’s to the point where he’s even wearing it to school because the parents have completely given up.

The bride further wrote: My sister calls me to give me a “heads up” that Josh will be wearing his costume to my wedding. Of course, she was livid. The bride told her sister in strong words that she would not want her nephew to be the ring bearer if he insisted on the Spider-Man suit. She wrote: I tell her absolutely not. I don’t care if he wears it during the reception, but I do not want Spider-Man walking down the aisle at my wedding and in all my photos. However, it is at this point that even her sister got angry. The woman added: My sister gets indignant, tells me “Then you don’t want Josh at your wedding” because she cannot get him to wear anything else without a tantrum ensuing.

The bride-to-be tries to explain that it's not her nephew she has a problem with but the costume and that it would surely ruin her big day. She stated further: I said if she cannot get him into something at least semi-formal, she can make arrangements for him to have a babysitter during the ceremony. Instead of trying to understand where she is coming from, her sister gets offensive. The woman wrote: She huffed at me and told me I was being a complete Bridezilla and “banning an autistic child from my wedding.” I’m not “banning” him, I’m just insisting he wear normal clothes. The boy's mother went further and even accused the bride-to-be of having a problem with Josh's autism.

She wrote further: She comes back, telling me I was essentially banning him because of his autism. My fiancé is backing me up but my sister and her husband are now threatening to not come to the wedding at all. I have no idea what to do. AITA?  While most people wrote the bride-to-be was not at fault, there are those who tried to take a middle ground. One Reddit user wrote: "You are the one that has to deal with the fallout from this. This will change your relationship with your sister and her husband. If they don't go to the wedding, word will get around that you 'banned' your autistic nephew. When it comes to situations like this, I don't think you will be coming across as 'the good guy'."

The user further said: "I agree that its your right to have the wedding you want, and I understand that you paid a lot for the photographer, but when you look back on those pictures would you rather be reminded of the event that caused a huge fight with your family and completely excluded your sister, or would you rather have a kid in a Spider-Man costume in, what, two or three pictures? If you think its worth sticking to your guns, then by all means. But personally, this is not a hill I would die on."