Smith also also made a $5,000 donation to the Cook Children’s Medical Center. 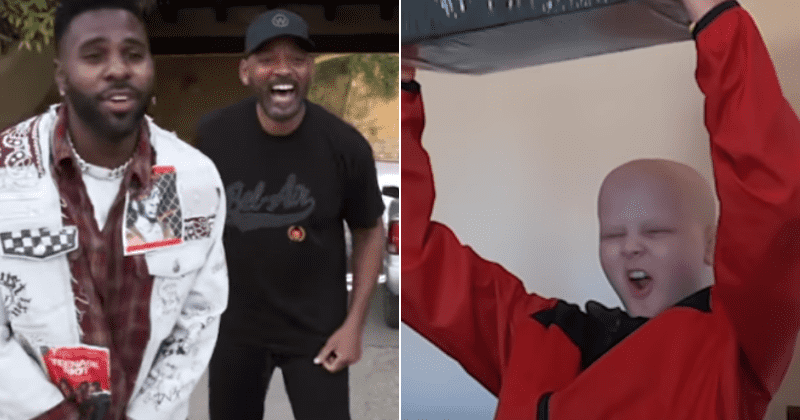 Will Smith's feel-good series on Snapchat has returned for a second season. Will From Home, kicked off on December 14, and the 10-episode series streams daily on the social media platform, reports Deadline. As part of the series, Smith surprises people across the country who are being honored for their acts of selflessness and bravery. The episodes will focus on people such as "Sonja Frazier, the Taco Bell employee whose alert actions saved a man’s life; Willie Ray, a chef who began giving out free meals in his community to those affected by a major windstorm; and Aaron Moreno, an 8-year-old who began selling plants to help support his mother and reunite his family." The second season will feature appearances by celebrity friends and guests including Alicia Keys, DJ Khaled, Jason Derulo, Jill Scott, Lil Nas X, Liza Koshy, Ludacris,  Black Thought, and Master P, among others, according to the outlet.

Will Smith is back to shine a light on exceptional people who brightened up a dark year. Watch the Will From Home Holiday Special, only on Snapchat. https://t.co/wDB766zKH5 pic.twitter.com/1yeJOa1KML

In a new episode of Smith's Snapchat series, The Fresh Prince of Bel-Air actor teamed up with GameStop to get a 14-year-old named Aiden a PS5 to celebrate the upcoming holidays. Aiden was diagnosed with cancer earlier this year. Aiden has had to undergo some of his treatments by himself because of pandemic restrictions and has been going through a really difficult time. Smith decided to step in and ease some of Aiden's troubles. According to Comic Book, Smith, with some help from Jason Derulo, was able to make Aiden's day by giving the young teen give a couple of cool gaming gifts: a PS5,  a DualSense controller, and a gift card for the storefront to buy a ton of new games for the console. GameStop also agreed to donate $5,000 to the Cook Children’s Medical Center while Smith himself matched the donation, bringing the total to $10,000. Not only was Aiden was one of the first few people to get the PlayStation 5, but he was also able to get his hands on the console, which wasn’t even available to the public at the time of filming.

His reaction is everything #WillFromHomehttps://t.co/duFCF2LEV8

According to TMZ, Aiden's dad, Chuck, had been trying his best to comfort his son during weekly chemo treatments, but he's had to stand outside Aiden's room a lot of the time—dancing to make him laugh. So when the celebrity duo decided to step in, entertainer Jason Derulo decided to start things off by teaching Chuck and Aiden some new dance moves virtually after which Will had Chuck and Aiden open the special box of goodies delivered to them. Absolutely heartwarming!

According to Variety, the first season of the Snapchat original series was produced by Will Smith and Jada Pinkett Smith’s Westbrook Media and released in April this year. According to Snap Inc., which owns the social media app, Will From Home Season 1 has been among its most popular originals, and reportedly has been watched by more than 35 million Snapchat users. “We have experienced many challenges this year, but Season 2 of Will From Home is an incredible reminder of the power that we as individuals have to better the lives of those around us,” said Brad Haugen, president of Westbrook Media. Season 1 ended with a Fresh Prince of Bel-Air cast reunion, reported Deadline, adding that "Uplift" is the focus of the series, especially in the new season. The new episodes will highlight people with inspirational stories during this extremely challenging year.

Snap Inc. head of original content Sean Mills previously told The Hollywood Reporter, "Will was feeling a lot of pent-up creative energy and was excited to do something with it in a new and different way. Our first reaction was to shore up the news coverage and really deliver on that," Mills said. "But after a week-and-a-half or so, we started to see a huge surge in interest in entertainment content, especially humor and comedy." He added, "The kinds of things that the community wants are things that are positive, that feel empowering. It’s not just about escapism but it’s about actually what is the good that can come of a challenging moment in time. Will From Home fits perfectly with that." We love that the actor is using the platform to spread smiles during this difficult time! And we wouldn't mind more Fresh Prince reunions as a result either!