Wife Suspects Husband of Cheating After Finding Long Hair In Shower, His Explanation Shocks Her

Taking to Reddit, the wife explained that she had a pixie cut, while her husband was bald. 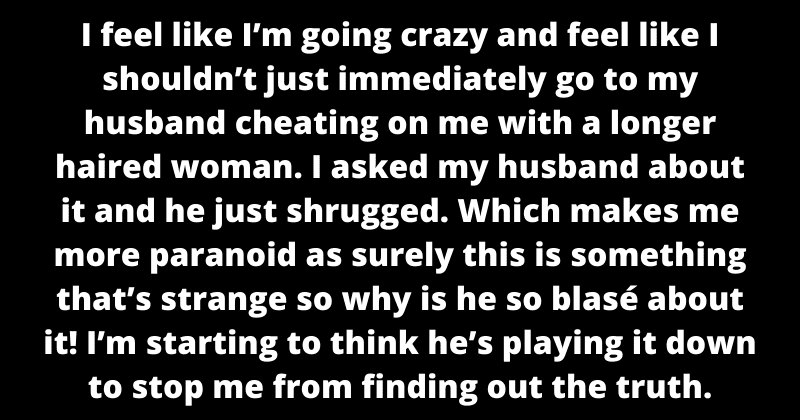 Most of us are highly suspicious beings. For those who are married, it won't be too far-fetched to say each is in a constant lookout to see if something is amiss in their relationship. One Redditor wrote about how paranoid she got about her marriage after she found strands of long hair in the shower sink - especially since she had short hair and her husband was bald.

She questioned her husband a few times but each time he would tell her he didn't know which made her even crazier.  Explaining her predicament on Reddit, she wrote, "While cleaning the bathroom I found a number of long hair strands over my bathroom wall by the shower."

She added, "...Confused I washed them away but couldn’t stop thinking about it. I decided not to mention it but kept looking out for them. There seems to be a pattern that there’s hairs appearing when I’m either at work or out for a longer time period."

She thought about confronting her husband but she wanted to gather more evidence of him "cheating on me with a longer-haired woman." She did ask him about the hair without implying he was cheating and "he just shrugged." A week or so later, she asked again and he feigned ignorance and even said it must have come from her. She said she got "more paranoid as surely this is something that’s strange so why is he so blasé about it! I’m starting to think he’s playing it down to stop me from finding out the truth."

A week after posting this, the Redditor made another post where she wrote about getting to the bottom of the matter. She thought of putting a "secret camera" but decided against it since she "didn't want to betray my partner's trust."

At the same time, she wanted to "squash any worries of someone living in my walls." She returned home early from work without her husband's knowledge.

"Upon returning home, nothing seemed amiss. I was expecting another car on the drive or parked outside on the street. There was no other car I didn't recognize. Quietly letting myself in, I was immediately confused. In the hallway, there was a pair of shoes I didn't recognize, and not only that, they looked like men's shoes," she wrote.

Just then her husband walked out of the kitchen with two cups of tea and was surprised to see her early at home. Realizing he could no longer put up the facade, her husband sat her down to explain what was happening.  "At the beginning of lockdown, his friend; someone I'm not all the close with because only met once, was evicted, lost his job, and had been couch surfing," she said.

She added, "So for some days over the past couple of weeks, this guy has been traveling to our house, and with the acceptance of my husband, using our bathroom to freshen up to attend interviews. He was also borrowing shirts and suits from my husband. As it turns out, my husband's friend has long hair and a beard. So it turns out my husband isn't cheating on me but was hiding the fact his long-haired friend was coming over to use our shower. After his shower, I ended up meeting "Dave", and he turned out to be a very nice bloke just down on his luck. I wished him the best for his socially distanced interview and he went on his way." When she asked her husband why he did not tell her about the same, he said, he was worried she would not be "approving of the situation."

Apparently, Dave was also "embarrassed" by the whole arrangement and did not want anyone to know. When the wife said she thought he was cheating, her husband was shocked that she even considered such a possibility. She suggested "his friend live with us until he's back on his feet" and was glad "it wasn't a stranger as such that wasn't unwelcome and someone that wasn't living in my walls!"