Victoria Redstall, who thinks the BLM movement is a terrorist organization, has had her bank account canceled after she created an issue over a mask. 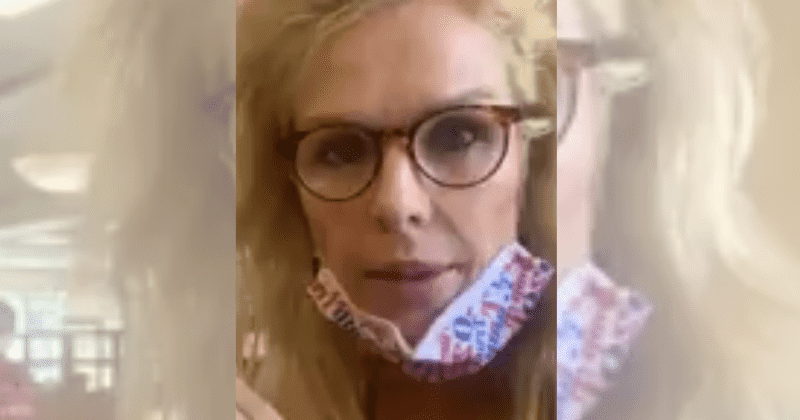 In yet another incident, a right-wing woman, also a Trump supporter, confronted a Black Wells Fargo employee because he wore a "Black Lives Matter" mask. She streamed a 4-minute-long verbal assault on Facebook Live. Victoria Redstall, dubbed 'Karen', has now reported that her incident at the bank branch has led to the cancelation of her account, the Daily Dot reports. In the video, Redstall is seen with her mask below her chin as she walks over to a teller helping her, and looks into her camera while whispering to her viewers about the unbelievable scandal she has just walked into. "I’ve got something worse," she says in the video. "The guy with Black Lives Matter thing is here, and I’m gonna film it," Redstall said that she had previously complained to the employee's manager about the guy with the mask a month ago and claims she was told that action would be taken against him.

"This is Wells Fargo bank and I want to see your mask, ‘cause you’re not meant to wear it in Wells Fargo," she claims. However, when she starts harassing the employee, the manager steps in to inform her that she cannot film inside the building and instructs her to delete her video, which the woman fails to heed to. Banks tend to have a no camera policy as it can cause severe privacy concerns for both the staff and customers. The manager then takes the woman to the side as she continues her rant. "But he’s wearing a Black Lives Matter, he’s wearing that, you know, very dangerous organization," she laments. She continues to film even after saying "Okay" when the manager repeatedly asks her to stop. She claims to be “shaking” and says that she wouldn’t be allowed to wear a Trump mask as an employee, which may or may not be true.

A woman dubbed a “Karen” says she has been asked to remove her funds from Wells Fargo after she filmed a Facebook live stream inside a bank and tried to get an employee to remove his Black Lives Matter mask. https://t.co/5GWDiqcKAn

The manager then comes over again to tell her she can’t record and denies Redstall’s claim that she agreed to “make sure” that none of her employees would “be representing Wells Fargo with a gang that is completely destroying America." "That’s not what I said,” the manager then says, “I said: Thank you for your feedback.”

Redstall received a call from Wells Fargo nine days later, telling her that she has just 30 days to get her money out of their bank after they told her multiple times to delete a video she aired to the world. She put up a follow-up post explaining her situation and wrote: "I was called again today by a very nice man from Headquarters saying that ‘due to the amount of followers I have on social media who might not be of my moral compass, I now pose a threat to the bank, therefore, must remove my funds within 30 days."

Why you acting so shaken Karen? You act like he pulled a gun on you while wearing the mask. Move on. Good for him and I hope Wells Fargo doesn’t see this and make him quit wearing it. pic.twitter.com/LvKiDZ2HZZ

While a lot of people didn't side with her, a few of them responded in favor of her and even said they now plan to pull their funds out of Wells Fargo. Redstall had even called the bank "Marxist" without being aware that this particular branch was the target of several Black Live Matter and Antifa demonstrations which accused the branch of racially profiling their customers. In a statement to Daily Dot, a spokesperson said: "I can confirm that the incident in question took place at one of our branches in the Los Angeles County area,” said a spokesperson. “At any Wells Fargo branch, video recording is not permitted." Redstall is a fairly public personality and has worked on the campaign for Republican Rep. Mike Garcia, and allegedly posts various claims about the BLM movement, calling it a terrorist organization staffed mostly by White people.