Remember Waterbeds? They're Making A Comeback After 50 Years 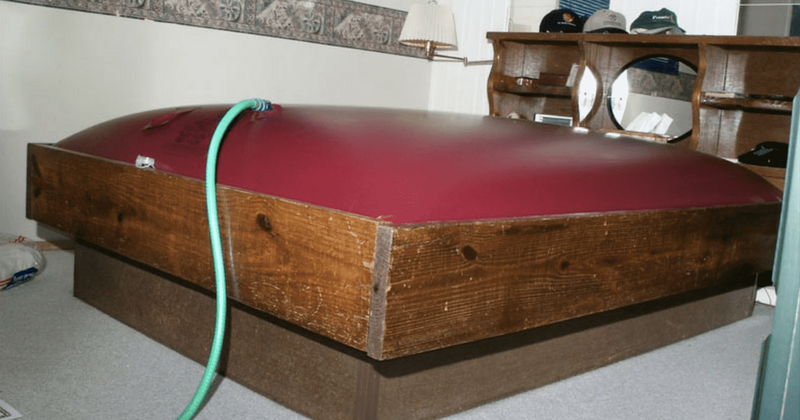 Waterbeds were all the rage in the '70s and '80s. Everyone wanted one, and if you have seen movies from the good ol' days, you will know why. An ad copy from 1970 actually read: ''Two things are better on a water bed. One of them is sleeping." While this may give you an idea of the notorious reputation waterbeds had, they came and went as all trends do. Like a lot of things that were trendy in the '70s and '80s, the waterbed also slowly declined into obscurity. But recently we saw a resurgence in flared jeans, bell sleeves, crochet fashion, and of course, overalls. Maybe it's time for the waterbeds to make a comeback, too.

Charles Hall is the inventor of the waterbed who first designed it as part of his college assignment in the late 1960s. It was designed to improve human comfort and was inspired by the soothing warm water of whirlpool baths, according to Popular Mechanics. From an assignment, it has come a long way. On top of being liquid support for the body, which is also how he got his invention patented, he also found a way to control the water temperature. It was then that the waterbed became an instant hit. If you were not an '80s baby and have not had the opportunity to experience a waterbed, now you can.

Nearly 50 years after the first waterbed came into the world, Hall along with his former colleagues, Keith Koenig of City Furniture which was called Waterbed City, and Michael Geraghty, a former water-bed manufacturer, came together again. Now, Hall and Koenig have come up with a less jiggly version of the waterbed that even looks like a normal bed, called Afloat. It debuted at City Furniture, in Florida, reported CBS News."At one time we were the largest seller of beds in South Florida, and we just sold waterbeds," Koenig said as we now wait to see if waterbeds become as popular as it was back in the day.

Afloat is available in a queen-size and costs $1,995 to $2,395. It even comes with a heater, a kit to fill it up and drain it, a 25-foot hose, and a metal frame. Hall has been using waterbeds all his life and currently lives alone with two Afloats. According to The New York Times, there is a dual mattress in his guest room and a king-size, single-bladder bed in his own room. "It’s got full cradling," Hall proudly said about his bed. When the main appeal of the beds was for sex, Hall said, "The cuddling and position aspects are far better than anything you could imagine,” and added, "I think for our generation, it’s comfort. Maybe sex for the millennials."

Hall, who is now in his 70s says he is sure a millennial has not seen a waterbed before but totally needs to get one. Speaking to Seattle Times, Hall said that waterbeds changed the mattress industry and allowed people to not settle for uncomfortable coil beds. "Memory foam, pillowtop mattresses, all that stuff began to appear," he said. "Look at the ads for the memory foams — they read like all waterbed ads." It's always a good idea to splurge on a mattress because we all spend a third of our lives sleeping. We might as well make it a comfortable experience.

"This generation doesn’t have the association that water beds eventually got as a place where lonely single men slept, in hopes of luring young ladies into their homes," Warren Shoulberg, a retailing journalist and consultant to the home furnishings industry said of the waterbeds. "The other thing is that consumers have no idea what’s inside most mattresses. It’s all gobbledygook. It’s this great mystery, and the industry loves it that way. It thrives on that confusion. The water bed is simple. It’s a big bag that holds water."