Is this the "right" way to eat a pineapple? 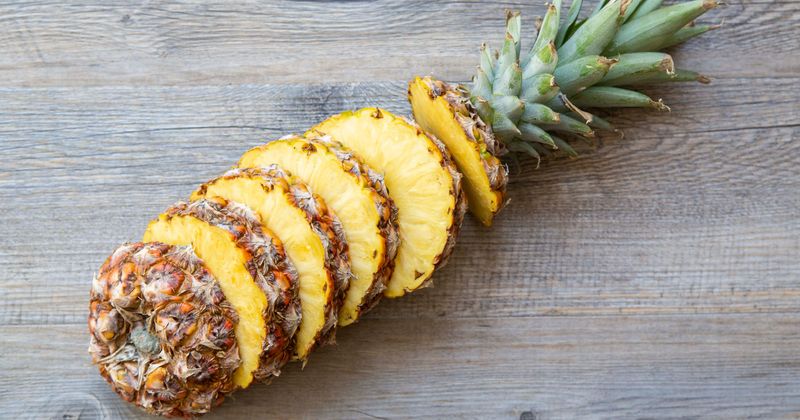 Most of us probably peel a pineapple's skin before digging into the flesh right? The task feels tedious so many of us even prefer pre-chopped or canned pineapple to avoid the  mess. But there seems to be a seemingly easier way to get to the chunks and it all started with a TikTok video showing a person eating a pineapple — with very loud, annoying chewing sounds — by ripping off individual pieces of the fruit, reports Buzzfeed News.  The video then made its way to Twitter, where it got a lot of people talking

Im sorry but what the actual fuck 😨 pic.twitter.com/DYaDoGMe7i

The video is currently unavailable but it showed how you can peel chunks out in sections because of the way the fruit grows. Some people pointed out that pineapples are actually made up of a bunch of berries fused together. So how do you make the cut? Twitter users pointed out that if the fruit isn't the right stage of ripeness, then the outer berries may come loose or the flesh of the fruit could be too soft to break cleanly. They also wondered if how far down you made the initial cut made a difference.

I LOVE this idea and need to see Rob and Akiva try this pineapple hack. pic.twitter.com/CqupuDddXq

Its cause pineapples are multiple fruits, meaning each one of those is a flower and they all develop into berries that form the big mass called the pineapple

For some people this "easy" hack didn't seem so easy.

the pineapple hack does NOT WORK pic.twitter.com/Y8EZZMVOA3

We had to use a knife at the end of the day... couldn't deal.

Well, my thumb hurts now and we had to cut around the center to help release... but, overall, it was a success. Has to be VERY ripe. #pineapplehack pic.twitter.com/m8hr45jhU4

This is me attempting the pineapple thing 😂 I think my pineapple is broken lol pic.twitter.com/n32RYQycYL

It's not ripe enough🍍

But some fruit lovers were able to catch on to the trick from the start.

You guys need to make sure your pineapple is soft to make it easy.

In case anyone sends that pull apart pineapple hack:https://t.co/a61YddCXyb

And others just though it wasn't worth the effort.

Tried the pineapple hack.
It does work, to a degree, but is messy as fuck.
Think I'll stick to my usual prep. pic.twitter.com/9QBRGhTAYV

Claire Lower from Life Hacker writes: I suspect that this is easier to do with a super ripe pineapple, but that also ignores the fact that is a messy way to eat this juicy fruit, and the fact that it takes “finessing” means it is not an easier, simpler, or more streamlined way to do things. It’s also not great for sharing, nor would it be a good way to serve it to a group of people. Several hands of unknown levels of cleanliness reaching into and pulling apart a pineapple, one segment at a time is unhygienic, inefficient, and ridiculous, especially when you consider that we are the only species with knives. Therefore, it is my professional opinion that this is not a good hack but is, in fact, wack.

What do you'll think?

I thought so. That video doesn't show them eating it. Just plucking it. And, knowing how pineapples have tough cores and tough skins, it's still really unusable.