The incident occurred at a Food Lion outlet in Havelock, North Carolina, and has since garnered national coverage, pushing the store to amend its policy. 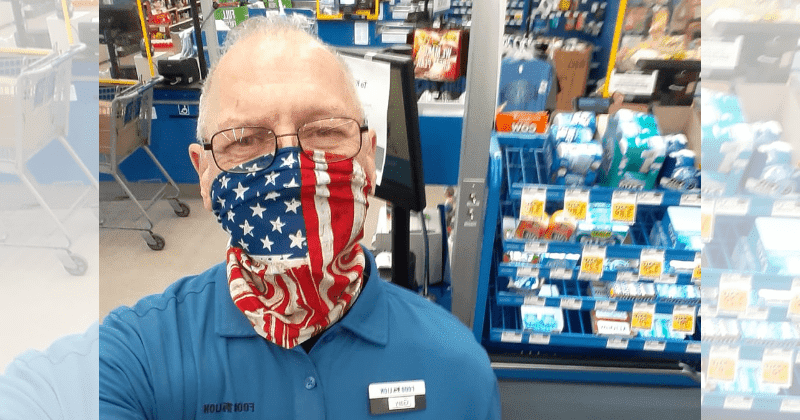 A US Navy Veteran has quit his job at a Food Lion after the management told him he couldn't wear an American flag as a mask to cover his face. Gary Dean revealed he quit his job at the Havelock franchise in North Carolina. He was shocked by the alleged anti-American rule considering it is a military town. "Apparently corporate came down and said 'Somebody was offended by the image of the American flag on the face covering,' Dean said, reports ABC13. Havelock is home to the Marine Corps Air Station Cherry Point. It is the world's largest Marine Corps air station, located about 40 miles from Camp Lejeune.

Gary Dean says he left his job at the Food Lion in Havelock, North Carolina, and is shocked the American flag would be offensive to anyone, especially in a military town.https://t.co/yHtbRCLXz2

The 63-year-old said he had been using the face covering for months but hadn't faced any issue. But, this new rule didn't sit well with him and he said he couldn't bear to take it off and abide by it. "As a veteran, my dad being a World War II hero, my best friend killed in Vietnam, out of respect for them I can't just say no, I'll take my flag and put it in my pocket," Dean told the outlet. "I had to quit, out of principle." Dean stressed, “Why would anybody for any reason be offended by the American flag, the stars and stripes?” He even pointed out that it was only a print of the US flag and not an actual America flag, and that there was no disrespect in what he did. When the media approached the store about the new policy, it said the policy "prohibits associates from wearing clothing with writing, insignia, or symbols."

So now, due to the being pressured, Food Lion says the Flag can be on your mask. Too late for me - giving in to pressure doesn’t reflect your true feelings!! 😡 No more Food Lion for me! https://t.co/YPhDbJ1qDJ

Dean says he's not upset with the store managers but that he feels corporate's rule disrespects the flag. "I love this country," he said. "I love that my dad went off and fought for my country, nearly got killed for this country but came back and raised a family. I love everything about that flag. So, yeah, that is my priority."  Offering a justification to the incident, Food Lion issued a statement which read: "At Food Lion, we have great respect for the American flag. Like many other organizations, we also have policies that guide the attire and conduct of associates in the workplace. As part of our effort to prevent the spread of COVID-19 and to protect the well-being of our associates and customers, we've required associates to either wear reusable face masks provided by Food Lion or choose to wear a different face covering while working. However, all face coverings must adhere to standards set by the company and communicated to each of our more than 77,000 associates. The policy prohibits associates from wearing clothing with writing, insignia, or symbols. The dress code is meant to ensure a consistent and professional representation of our associates inside of our stores."

Thank you @FoodLion for changing your policy—good decision! Employee Gary Dean, a military veteran, was told he couldn’t wear his American flag face covering to work because the NC store had one complaint—someone was offended. Are you kidding me? https://t.co/qdJuKemWtu

However, the grocery chain received significant backlash for its policy with people from all over the country deriding its decision that led a veteran to quit his job. This led to the store reneging the policy, which people on social media considered a good move. Jim O'Neill wrote: "Glad to see @FoodLion has come to their senses and is allowing employees to wear face masks depicting the US Flag! Supporting our flag and our military is not divisive or offensive. Thank you to Air Force vet Gary Dean for standing up for our flag!" In a statement on Twitter, the chain wrote: "Food Lion deeply respects the American flag. We listened to our associates and customers about our uniform policy. We require that associates wear masks without writing, insignia, or symbols. We will allow associates to wear masks with the American flag that meet this standard."