Olivia Winslow and Camryn Amy got into a confrontation with the woman outside a Democratic National Convention in Wilmington, Delaware on August 20 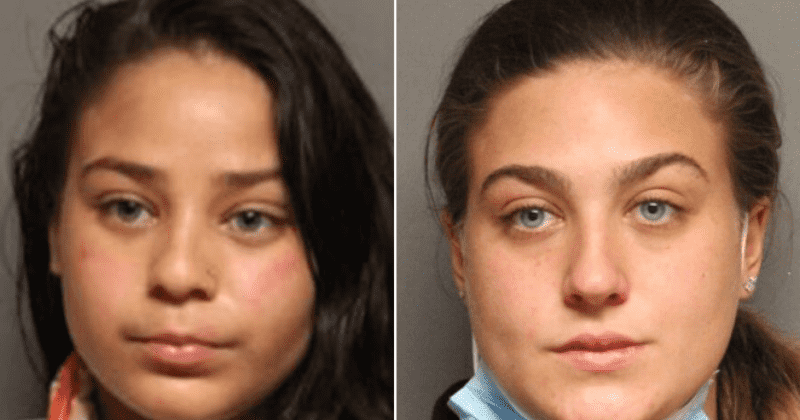 Two women who took away a MAGA hat from a child and his mother outside the Democratic National Convention in Delaware on August 20 have been found guilty of hate crime and several felony charges. The incident that was captured by the mother on video showed Olivia Winslow and Camryn Amy, both 21, in a heated exchange with her. They can be seen tearing, throwing, and stamping on placards, possibly of the mother, and then picking up a MAGA hat from the ground that belonged to her and refusing to give it back. The 7-year-old son of the woman is seen running after them and pleading for the cap. "Get it Liv!" Amy is heard saying as she laughs, referring to the hat on the ground. Amy also picks up another MAGA hat nearby. The little boy is heard saying, "That's somebody else's hat!"

Delaware Police arrested Camryn Amy, 21, and Olivia Winslow, 21, on charges of robbery, conspiracy, & endangering the welfare of a child, after the 2 were indicted on hate crimes for stealing a 7-year-old boy’s #MAGA hat. WTF is wrong with people? https://t.co/aAUASVPbz9

"I just want it to sit on the floor!" the child cries out to them. The mother says, "Get your hat back baby." They continue to walk and then could be heard telling  the child, "Your mom f**king likes Trump." The boy eventually is heard saying, "Mom call 911." They then walk around what seems like a parking lot as the woman continues to film them. At a certain point, another person, a White male intervenes on behalf of the mother and the child, and tries to retrieve the hat from Amy. She tries to fight him off and punches him in the face. She then throws the hat on the other side of a fence. The two women also have a friend, a Black man. He tries to stop the White man from pursuing them further. The mother continues to film them and Winslow tries to start a physical fight with her. Her friend intervenes and carries her away.

Good. We’ve all had enough of the Biden supporter’s terror campaigns.

Amy comes back towards the woman and swats her with what looks like a piece of paper. A grand jury indicted the two women of charges of robbery, conspiracy, and hate crimes, as well as a misdemeanor charge of endangering the welfare of a child, according to a report in New York Post. The indictment read that the women are accused of committing the crimes “for the purpose of interfering with the victim’s free exercise or enjoyment of any right, privilege or immunity protected by the First Amendment to the United States Constitution, or committed said crime because the victim had exercised or enjoyed said right or rights.” The Delaware Attorney General Kathleen Jennings, a Democrat, condemned the incident and the two women.

These girls are a perfect example of the generations out there today. If you look at the riot videos and pictures, you’ll see that a lot of the faces in those crowds are about the same age. They’re easily influenced and brainwashing them is just as easy to do. I don’t feel bad!!

Jennings said in a statement, “Violence in any form is unacceptable, but harming another person – let alone a child – because of the expression of their views betrays the principles on which our country was founded. Free speech, free assembly, and free expression are sacred, no matter whether we agree with the opinions expressed, and especially when we don’t.” In another video captured before the confrontation, the mother is seen pointing the camera at them and asking them why they voted for Biden. Before this, she is heard saying, "We voted for Trump." She is asked by one of the women "please go" but she continues to ask them why they voted for Biden. Amy asks the woman to get the phone "out of my face."

Before the #Biden supporters #OliviaWinslow and #CamrynAmy attacked a 7 year old child, here’s how they acted toward adults pic.twitter.com/j2obmuGvxE

While most people condemned the actions of the women, most thought the charge of hate crime was a bit too harsh. Tom Sproson wrote on Facebook: The cops who shot Breonna Taylor still haven’t been arrested and they get charged as a “hate crime” for stealing a f**king hat. Not that they absolutely could’ve used a lot more tact in what they did but come on, this absolutely proves the system is unfairly biased. Another named Taff Handley wrote: Stealing a hat, alright to carry automatic weapons in the street, have a president who is utterly mired in sleaze, have police murder people in their apartments or on the streets, but pinching a trump hat ohhhh. America is a f**king nut house.