The mother wrote, "This is the world we live in!!! This is America. I am so sorry Mila, so lost for words." 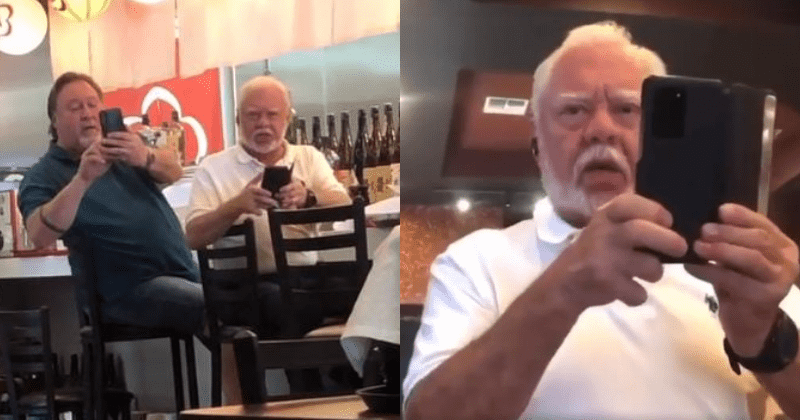 Two white men harassed a Black lady enjoying a meal at a restaurant in Las Vegas because they were annoyed with the "noises" coming from her 1-year-old toddler. The lady's sister was also there with her and the family was lost for words at the reaction of the two 'Kens'. The child named Mila was not even crying at the time. The mother who goes by the name fiyameta on her Instagram account wrote about the incident on the page while also posting a few videos of the exchange with the men. In the videos, one can see the two men sitting at the bar counter of the restaurant and saying things to the woman and her family from across the room.

The mother wrote: Never in a million years would I have thought I would encounter this. I took my 13 year old sister and my baby girl Mila to dinner to UMEZONO SUSHI AND GRILL in Las Vegas NV. Walking in, I see them giving us the death stare, my body had chills. She added that it had not been even "5 minutes" since she walked in and found a place in the restaurant when the men started complaining and "mocking" her child. She wrote that the men started calling my 1 year old daughter annoying. Calling me a radical left and telling me to keep her quite or else! (sic). At this point I’m shaking terribly, I did not know what to do or say. My intuition told me if I did anything out of my character that they were going to cause us some harm, so I pulled out my camera and started recording.

She added: But right before I started recording, the creature in the white shirt said some derogatory, disgusting, racist comments I do not wish to repeat at this point. God knows what else they were saying to the chefs that were in front of them. I am so heartbroken for myself, my little sister but more importantly for my innocent, sweet baby girl Mila. The video shows the mother finally confronting the men by recording them. She is heard saying, "So this guy (referring to the man in the white polo) is being racist because my one-year-old is making noises" as she pans her phone towards her toddler who is just seen shaking in her seat. "The only way to stop you guys is to put you on camera," the lady adds in the clip and says, "Shame on you...shame on both of you. Ths world would be a much better place without you two."

The man in the white polo replies to the woman by repeating her words, "shame on you." The two then turn back to the bar as they inaudibly seem to be chatting about something. The woman lowers her phone but keeps recording and tells her sister "I can't believe what I just witnessed" as she keeps recording. The men seem to be chatting among themselves and that seems to be the end of the matter. But the elderly man's companion turns back to her and says "so you're going to keep filming?" He then takes out his own phone and starts recording the lady. He is joined by his friend, the elderly man who angrily touches his phone's screen to film the mother. “This is what happens when someone has a dinner that makes their children really, really noisy,” he is heard saying.

This man comes menacingly towards the family as he continues to point his phone at them. He comes really close to the woman at which point she says, "You need to back up. I don't feel safe." The staff at the restaurant try to intervene several times but to no avail. The mother added in her post: This is the world we live in!!! This is America. I am so sorry Mila, so lost for words."