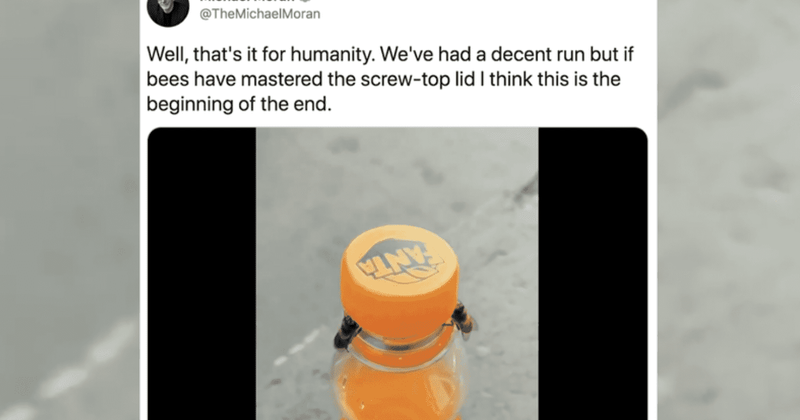 Is the end near? A viral video of two bees working in tandem together to open a bottle of soda and being successful at it has left people stunned. Recorded in Sao Paolo, Brazil, the under 10-second video made it to the ViralHog channel on Youtube where it took off. In the video, the woman recording the fascinating scene claims that she was on her lunch break and intending to drink Fanta when she happened to notice the two bees had "stole" it from her and were already hard at work, Comic Sands reports.

If and when they open a child-proof-cap aspirin bottle (I cannot), we'll be doomed for extinction!

"The video was recorded during my lunch break from work," she explained. "I got a soda from a customer but soon the bees stole it." In the video, we see a small Fanta bottle placed on what appears to be concrete pavement. The lid appears to be partly open and moving with the two bees slowly coming into the frame, positioned at about a 90-degree angle and slowly turning the lid in unison. They manage to loosen the lid before exerting one final time to get the lid off the bottle and onto the ground. The clearly bemused videographer lets out a huge laugh after watching the nail-biting adventure transpire. The video initially shared on Youtube on May 24 has also made its way onto social media platforms, and has generated millions of views so far.

"Well, that's it for humanity. We've had a decent run but if bees have mastered the screw-top lid I think this is the beginning of the end," a user named Michael Moran wrote on Twitter, sharing the clip. So far, the tweet has received over 1.3 million views and more than a thousand responses. "If we could hear them talk I’m sure it would be something like ‘Gary, I said twist to my left! For fuck sake’", a user said, jokingly. "If and when they open a child-proof-cap aspirin bottle (I cannot), we'll be doomed for extinction!", a third wrote, in shock and awe at the teamwork of the bees. A fourth user who has seen the doom of humanity responded: "We've been fighting a losing battle against the insects for fifteen years, but I never thought I'd see the final face-off in my lifetime. And I never dreamed that it would turn out to be the bees. They've always been our friends."

Well, that's it for humanity. We've had a decent run but if bees have mastered the screw-top lid I think this is the beginning of the end. pic.twitter.com/XyHonJ2q73

On Youtube, a commenter felt animals don't get the credit they're due. "Animals are so much smarter than they get credit for," they wrote. "Not only are they getting the cap off, [but] they’re [also] purposely working together to do it!" Another added: "This is an upgraded model. They will soon be driving cars to their hives." A third stated: " All I’m getting from this is that my drink isn’t even safe with a cap on."

Bees are a vital part of our ecosystem, however, the bee population has been on the decline in recent years due to a rapid loss of biodiversity across the globe.