Lara Trump spoke to her father-in-law for her online show, 'The Right View with Lara Trump'. 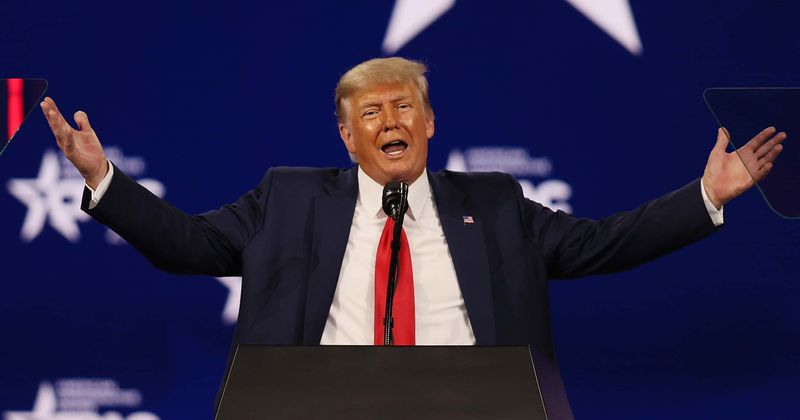 Donald Trump had his first interview since he left the White House with his daughter-in-law, Lara Trump on her online news show The Right View, which was previously produced by the Trump 2020 campaign. Lara Trump is married to Eric Trump. According to Variety, the interview of the former POTUS has been removed from Lara Trump's Facebook and Instagram accounts. A day after a pro-Trump mob attacked the US Capitol, Facebook decided to suspend Trump's Facebook and Instagram accounts. A day later, Twitter banned Trump permanently on January 8.   Facebook CEO Mark Zuckerberg said at the time that “the risks of allowing the president to continue to use our service during this period are simply too great.”

Lara Trump later posted messages that her team supposedly received from the company explaining why the interviews had been removed. One message read: We are reaching out to let you know that we removed content from Lara Trump’s Facebook Page that featured President Trump speaking. In line with the block we placed on Donald Trump’s Facebook and Instagram accounts, further content posted in the voice of Donald Trump will be removed and result in additional limitations on the accounts. In the 18-minute video, Trump spoke about “social media censorship, China, Joe Biden, the FAKE NEWS, and a potential 2024 run.”

Donald Trump suggests he will run for US President again in 2024 in TV interview with Lara | Daily Mail Online https://t.co/Pi4VToKuVN

According to the Daily Mail, Trump made some comments about how "boring" Twitter had become without him. The former President unsurprisingly made fun of Joe Biden saying he "didn't know where the hell he was" when he fell down the stairs on Air Force One. Speaking of his Presidential run again in 2024, he said, "You do have hope, that I can tell you, you do have hope. We love our country, this country, we all owe a lot to our country, but now we have to help our country.'"

Trump slammed Biden's recent press conference as well. "Well I think the press conference is probably the least of it," Trump told his daughter-in-law. "People saw a lot of things happening long-prior to the press conference - and even the trip up the stairs - up and down, three times - there are a lot of things going on, so we'll see what happens. I hope he's in good shape I hope he's OK for the sake of the country." Speaking of Biden's fall, he compared it to the media's coverage of his own "inch by inch"  walk down a ramp after a speech at West Point. "But they covered that for weeks, and this guy falls down three times, he couldn't get up, the third time he didn't know where the hell he was. And it was not on the evening news, other than a couple of networks, but it wasn't ABC, CBS, NBC, and it got almost no coverage. It's incredible."

If you are angrier that Facebook removed a Lara Trump interview with Donald Trump than you are at Donald Trump for not calling off his Capitol riot until Capitol police were beaten bloody you have serious fucking problems.

Trump also went on to talk about the rise of "cancel culture" in the country. "I think that they [America's allies and adversaries] cannot believe what is happening. Can you imagine China looking at us and they're talking about Dr. Seuss and that was like the big thing of the day - but it's gone beyond Dr. Seuss, they want to take down monuments to heroes, they want to obliterate our history. Whether it is good or bad you learn from it, you have to learn from history and some is bad and some is good. I would say most of it's good. But they want to obliterate our past and what you have is you don't have much of a country left. I think China is very happy now and I think that Russia and a lot of other countries are very happy. They look at what is going on and they don't believe it." Trump also brought up his plans on starting a new social media platform now that "Twitter has gotten very boring, a lot of people are leaving Twitter." He said: "'So I think there's room for something and I bring a lot of people with me, so we'll see."