The national election model developed by Oxford Economics has accurately predicted all the elections since 1948, with the exception of 1968 and 1976. 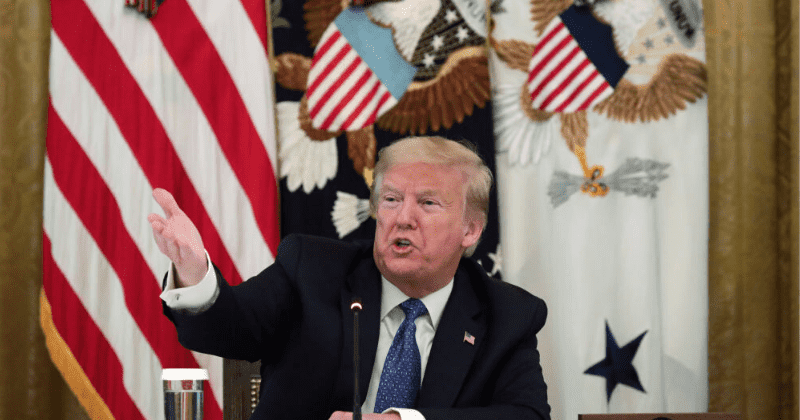 What happens when your most valuable attribute turns into weakness and brings about your downfall? Donald Trump is set to find out how that plays out if the latest report is anything to go by.  As the country tries to shake off the pandemic, we are witnessing some grim realities staring back at us —the jobs data that Trump bragged about has recorded more than thirty million losses thus far and the economy, in general, is in tatters as businesses are shutting down.

Based on current economic models, Oxford Economics (according to CNN Business) has #Trump losing Missouri. If he loses MO, it could be a landslide against him of epic proportions: Reagan v Carter? LBJ v Goldwater? FDR v Hoover? Who knows? #VoteHimOut

According to a national election model developed by Oxford Economics revealed that Trump is expected to suffer a "historic defeat" come November. The model used key drivers of an economy such as disposable income, unemployment, and inflation to forecast election results and predicted that the current president will lose by a landslide after he captured just 35 percent of the popular vote. This is a far cry from predictions pre-pandemic which showed that Trump would win with over 55 percent of the vote. If the newly predicted numbers turn out to be right, it would be the worst ever performance by an incumbent president in over a century.

.@JoeNBC: "With the prospects of a historic Democratic landslide building with every Trump news conference, every deranged tweet, every racist remark, wouldn't now be the time for Republican candidates to stand up, speak out and finally stop?" https://t.co/i0NqTKjtSs

The model is highly credible. It rightly predicted all the elections since 1948, with the exception of 1968 and 1976, and in the cases of George W. Bush in 2000 and Donald Trump in 2016, both of whom lost the popular vote but won the election anyway. "It would take nothing short of an economic miracle for pocketbooks to favor Trump," Oxford Economics wrote in the report, further stating that the economy will be a "nearly insurmountable obstacle for Trump come November."

The election model bases its result on the predication that per capita would fall by 6 percent compared to last year while job losses continue to hover around 13 percent. "The economy would still be in a worse state than at the depth of the Great Depression," the institute wrote. The model also conducted several state-level predictions incorporating aspects such as local economic trends and gasoline prices and reported that Trump is likely to lose the electoral college by 328 to 210. The model also revealed seven swing states including Iowa, Michigan, Pennsylvania, Ohio, Wisconsin, North Carolina, and Missouri would be won by the Democrats."We would expect these states to experience significant economic contractions and traumatic job losses that would likely swing pocketbook vote," the report noted.

The election is in 174 days. That is not far away. Trump must lose in a historic landslide, losing 40+ states, and taking the Senate down with him! Our democracy’s last safety valve! https://t.co/PJsalp1kZ1

There are already talks about election predictions coming in too early with some even downplaying the model for its inability to accurately predict outcome in these pandemic times. Greg Valliere, the chief US policy strategist at AGF Investments, said:  "Traditional models work in normal times. But we're not in normal times right now. If new infections really pick up, people will conclude Trump opened the country too soon. But if new infections drop, Trump will get some credit.” Meanwhile, Oxford Economics has said that the study isn't definite by any means suggesting that the models have "inherent limitations"  as it doesn't include a candidate's likeability or their agenda.

A new CNN poll finds 51% of voters back Biden, while 46% say they prefer Trump. But critical battleground states tilt toward Trump. https://t.co/0GzbdT6Zoz

Another unpredictable factor is just how the pandemic plays out against voter turnouts. While a strong Democrat turnout would see Trump lose Tennessee, Georgia, Arizona, Texas, and Florida, a weak one combined with sharp economic recovery gives Trump a "razor-thin" victory at the electoral college. With all said and done, there's no guarantee that Trump won't make it for another term as evidenced by various other prediction platforms. PredictIt, one such platform, has forecasted the chance of a Trump victory at 50 percent, up 5 percent from 45 percent compared to the results in March.

Based on current economic models, Oxford Economics (according to CNN Business) has #Trump losing Missouri. If he loses MO, it could be a landslide against him of epic proportions: Reagan v Carter? LBJ v Goldwater? FDR v Hoover? Who knows? #VoteHimOut