Nancy Pelosi pointed out that President Trump has often used crass language to target women over the years. 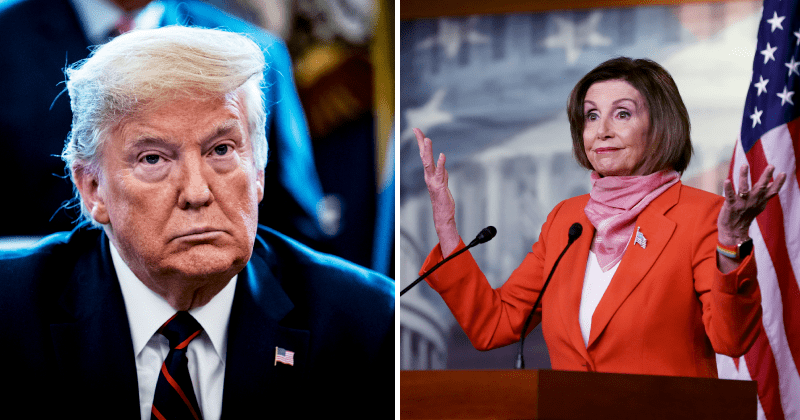 President Donald Trump went on a rant against House Speaker Nancy Pelosi, calling her a “sick woman” and a “waste of time” after she called him “morbidly obese.” Trump has a history of targeting people based on their appearance, but he didn't take it too kindly when Nancy Pelosi gave him, what she described as, a taste of his own medicine. “I don’t respond to her. I think she's a waste of time,” said Trump on Capitol Hill on Monday evening, reported The Hill. He went on to add that she had mental problems. “Pelosi is a sick woman. She's got a lot of problems, a lot of mental problems. We’re dealing with people that have to get their act together for the good of the country,” said Trump, after America recorded more than 93,000 Coronavirus deaths.

Trump was responding to Pelosi's comments about him taking hydroxychloroquine as a preventive measure against Coronavirus. Donald Trump has been pushing the unapproved drug as a potential treatment for Coronavirus despite multiple medical agencies, including the CDC, and scientists warning against it. House Speaker Nancy Pelosi took a dig at him and suggested he shouldn't be taking the drug, pointing to his age and weight. "I would rather he not be taking something that has not been approved by the scientists, especially in his age group and in his, shall we say, weight group, morbidly obese, they say," said Pelosi during an appearance on CNN's Anderson Cooper 360. "So, I think that it's not a good idea," added Pelosi.

“It's like a child who comes in with mud on their pants ...He comes in with doggy doo on his shoes and everybody who works with him has that on their shoes, too, for a very long time to come."pic.twitter.com/UesaPt3yQJ

Pelosi pointed out that Trump has repeatedly attacked women based on their appearances. "He's called women one thing or another over time, and I feel like he thinks that passes off as humor in certain cultures, and I thought that was what that was," said Pelosi, reported The Independent. "I was only quoting what doctors had said about him, so I was being factual and in a very sympathetic way of stating ... that we don't want our president taking something that could be dangerous," said Pelosi.

Earlier this week, Trump urged Americans to try the antimalarial drug, despite medical experts warning against the idea. "You'd be surprised at how many people are taking it, especially the frontline workers before you catch it, the frontline workers, many, many are taking it. I happen to be taking it," said Trump, prompting a flurry of questions from reporters. When asked if there was any evidence the drug was effective in preventing Coronavirus, Trump said, "Here's my evidence: I get a lot of positive calls about it," said Trump. I've heard a lot of good stories [about hydroxychloroquine] and if it's not good, I'll tell you right I'm not going to get hurt by it." The White House backed the claims of the President and claimed in a letter that "the potential benefit from treatment outweighed the relative risks."

Even Fox News hit back at Trump's claim that hydroxychloroquine was safe to take as a precautionary measure against Coronavirus. The network's anchor Neil Cavuto pleaded with Americans to ignore Trump's advice and told them in no uncertain terms that the drug could prove to be potentially fatal for the vulnerable population. “If you are in a risky population here, and you are taking this as a preventative treatment to ward off the virus ... it will kill you,” said Cavuto in a segment on Fox News. “I cannot stress this enough: This will kill you.” The Fox News anchor cited multiple research studies that revealed the unapproved drug didn't show any benefits while treating Coronavirus.

The House Speaker and the President have clashed multiple times during his stint at the White House. Pelosi suggested Trump had mental problems after a heated exchange with Trump on Syria. "I pray for the president all the time … I think now we have to pray for his health ⁠— this was a very serious meltdown on the part of the president," said Pelosi. The House speaker said the Democrats "couldn’t continue in the meeting because he was just not relating to the reality of it”.

‘It was a manifesto of mistruths’ — Nancy Pelosi explains why she ripped up Trump’s speech pic.twitter.com/2ZrfDapVNY