Many people came out in support of the Duchess of Sussex including Chrissy Teigen, and praised her for sharing her grief. 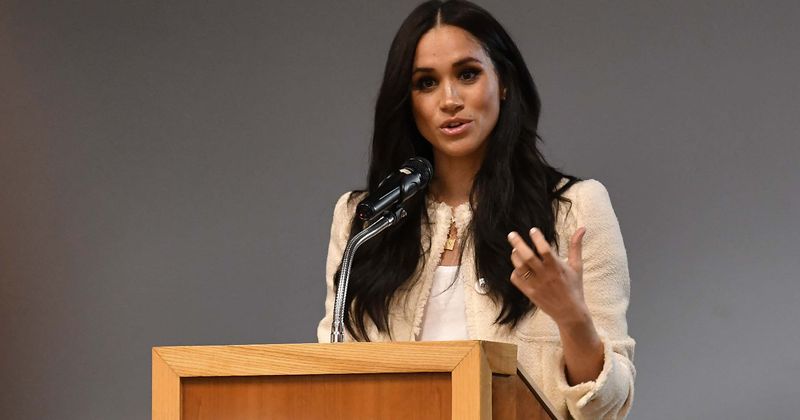 In a deeply personal essay, Meghan Markle revealed that she suffered a miscarriage last summer but was met with abuse from trolls online. Miscarriage has always been a sensitive issue and the abuse directed at the Duchess of Sussex is yet another attempt to keep miscarriages as a taboo subject. Meghan opened up about her miscarriage and the grief that followed in an effort to break the norm and encourage people to speak out about it. She pointed out that close to 10-20 percent of known pregnancies ended in miscarriage but it's rarely spoken about, which made it ever so hard to share the pain and grief. Meghan's message won't be drowned out by the noise of the trolls that fervently attack her but it's a reminder to every one of us to be more empathetic and kind, especially when someone opens up about their personal struggles.

Having recently endured a miscarriage myself, Meghan Markle's piece is heartbreaking to read. However, the subsequent spiteful, ignorant, venomous comments people have taken time out of their day to write have hurt my heart more.
What a world.

“what would happen if one woman told the truth about her life? the world would split open.”
-muriel rukeyser
a private pain shared publicly may not help you, but it helps someone. Opinion | Meghan Markle: The Losses We Share - The New York Times https://t.co/7Wzjscgt5m

As we reported, in an opinion piece for The New York Times, she opened up for the first time about her miscarriage that happened last July. Meghan, 39, wrote that she was having a seemingly normal day when she suddenly felt a sharp cramp. The pain caused her to drop to the floor. She knew something wasn't right. "I knew, as I clutched my firstborn child, that I was losing my second," penned Meghan, revealing that she had suffered a miscarriage. "Hours later, I lay in a hospital bed, holding my husband's hand. Staring at the cold white walls, my eyes glazed over. I tried to imagine how we'd heal." The pain of losing a baby was too much to take for Meghan Markle and her husband, Prince Harry. "Losing a child means carrying an almost unbearable grief, experienced by many but talked about by few," she wrote.

Meghan Markle writes eloquently about the loss of her child: pic.twitter.com/qyXhwycch5

That Meghan Markle could write about her miscarriage knowing that it would add fuel to the fire of the demons who want her demise, makes her even more of a queen.

I have spent far too many minutes of my life wondering where the hatred some feel for Meghan Markle comes from and I seriously can't get beyond three boringly obvious reasons: reactionary racism, ingrained sexism and deep, deep envy.

She used her personal experience to highlight not just miscarriages but also the grief that the pandemic has entailed along with racial issues in America. She used her personal experience to urge people to be more empathetic and kind to one another during a year that has been a nightmare. With people being cooped up indoors to fight the spread of the virus, mental health issues have grown multifold across the world. "This year has brought so many of us to our breaking points. Loss and pain have plagued every one of us in 2020, in moments both fraught and debilitating," wrote Meghan.

If this is your reaction to Meghan Markle writing about the loss of her baby, take a long, hard look at yourself. Maybe, just maybe, she's written that essay to bring comfort to others and to break the silence on miscarriage. pic.twitter.com/VARYtJfcfL

Already have one friend who has now shared her story of a recent miscarriage - which I didn’t know about - because of Meghan Markle’s piece today. There’s power in telling these stories at every level ❤️

A great many of you reveal who you really are when anything related to Meghan Markle arises. I appreciate when you take your masks off. I do.

Meghan asked people to show compassion to one another and urged people to reach out to those we can and ask the question, "Are you Ok?" just as a journalist had once asked her. At the time, she replied honestly, "Thank you for asking. Not many people have asked if I’m OK.” It also highlighted the immense pressure Meghan Markle had to endure as the British media hounded her.

As we all know going through a miscarriage is physically and emotionally painful. To those people being so unkind about Megan Markle, have a serious look at yourself. You are disgusting. Included in this are just a few of the tweets I saw slamming Megan. #MeghanMarkle pic.twitter.com/U5PR7EPh0J

When I had my miscarriage, I learned from my OBGYN that it occurs 1 in 4 pregnancies! THAT info astounded me.

I asked, “Why isn’t it more common knowledge?”

“Very few want to talk about it.”

Thank you, Meghan Markle, for sharing. Sorry for your & Prince Harry’s loss. 🙏🏼 https://t.co/YOhHvcjSaU

Despite baring her personal loss to show it's okay to be vulnerable, trolls attacked the actor. The vitriol aimed at Meghan Markle is nothing new but for trolls to target her over a personal essay that calls for empathy is distressing. While the trolls sent hate messages and abused the Duchess of Sussex, many came out in support of her and praised her for opening up on the taboo subject. Chrissy Teigen, who suffered a miscarriage recently, came out in support of Meghan Markle and quote tweeted an account that hated on Meghan, writing, "Award for today's absolute piece of sh*t goes to Marco Giannangeli, Congratulations, piece of sh*t." However, she later deleted the tweet and posted, "Sorry forgot I'm trying to be nicer lol." Twitter user Paisely Thomson reminded the trolls that they weren't just attacking Meghan but their loved ones as well. "Meghan Markle won't see all of the nasty shit you write about her but your friends who have experienced miscarriages and the loss of a baby will," wrote Thomson.

I’d cleared my calendar for holiday food prep, but I see that I may be needed for Meghan Markle pro bono social media defense. In other words, I 👏🏽have 👏🏽 time 👏🏽 today 👏🏽 pic.twitter.com/QgyaQrowgv

if i see one more “she wanted a private life why is meghan markle talking about a private matter in essays?? huh??”

1) miscarriage is not a private secret, that stigma is damaging, harmful, and antiquated
2) the awareness she is raising is vital
3) you’re probably just racist