Netizens were furious and criticized the couple for their "tacky" and "gross" invitation. 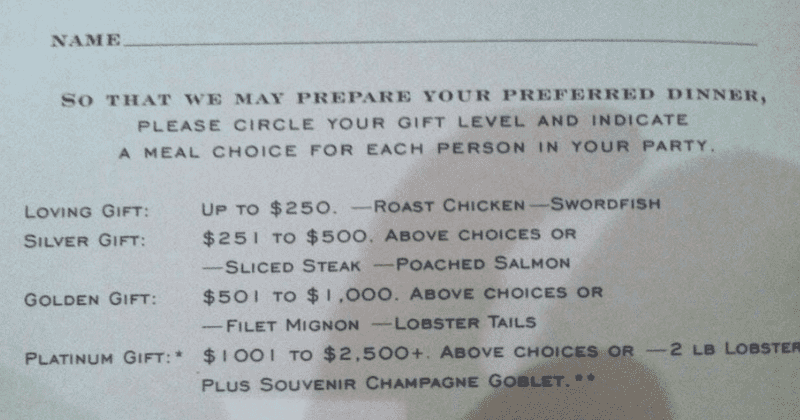 Weddings are an expensive affair. While some can afford to throw a lavish wedding, there are others who work within a budget and make the most of it, hoping to get some cash gifts to offset some of the expenses. Therefore, when this bride-to-be opted to serve their guests a different meal plan based on the cash gifts they would receive for their reception, they were unsurprisingly slammed across social media for creating these "gift levels" calling the couple's invitation "tacky" and "gross" reports Daily Mail. The invitation came to light when it was leaked, and people were not having it.

A picture of the RSVP invitations was shared on Reddit's "Wedding shaming" thread and it showed a four-tiered system of dinner choices. "So that we may prepare your preferred dinner, please circle your gift level and indicate a meal choice for each person in your party," it began. The first (and lowest) level was labeled as a "loving gift" which accounted for gifts up to $250 and offered a choice between roast chicken or swordfish dinner. The next tier was "silver" for gifts between $251 and $500, with additional options of sliced steak or poached salmon.

The third option dubbed as the "Gold gift" section where guests had the option of filet mignon or lobster tails, provided they paid anywhere between $501 and $1,000. The final gift option was "platinum," reserved for people who presented $1,001 to $2,500. In addition to all the dishes, they were also offered a 2-pound lobster and a souvenir champagne goblet.

People noted that this invitation excluded people with dietary restrictions, and forced them to choose a particular tier. People who were vegetarians and Jewish would only get their respective meals only at the "platinum level," per the menu leaving them no choice. What's more, there was no provision for those guests who had allergy restrictions. You only get a vegetarian option if you do the biggest gift option? These people have lost their damn minds, noted Redditor round_robin959903.

averagebearymcbear wrote: This seems more like something you would encounter at a charity dinner than at a wedding. It's still tacky and horrific, but it feeds into the ostentatious desire to flex on other donors found at some charity events. I truly hope it isn't a wedding couple. azgiss shared: Ooof, yeah, hoping this is from some horrifically tacky fancy-shmancy gala and not criminally tacky newlyweds. I'm looking at the prices at my local fish market, too....for $180, you can get FOUR 2 pound lobsters PLUS 4 pounds of steamer clams. And I'm no mathematician, but 4+4>1, and $180<$1,000. I say we skip out on this hell event, save $800, and eat like kings at home.

User frolicndetour expressed: Who doesn't want a souvenir champagne glass from someone else's wedding? For $2500, I can fly to Ireland, stay a week, and buy a Waterford flute 🙄.

Per Fox News, the top comment read: Everybody should just say their gift was over $1K, eat the 2lb of lobster, and laugh thinking about the couple opening their $40 toaster later. Although people didn't hold back while condemning the pair, a wedding blog Jersey Bride revealed that the cards sent out by the couple were actually meant to be a joke.

Daily Mail reports that the couple's joke obviously backfired when guests failed to realize that the invitation was actually a prank and it ended up posting pictures of it on social media with many calling the tiered menu "offensive" and "rude." According to Jersey Bride, "After this started getting gossiped about (and posted on FB), the couple who sent this out with their wedding invitations said it was a joke, and they were surprised no one "got" the joke."