Three-year-old Colin is a big fan of Elsa from the Disney movie Frozen and wanted to dress up like her and his dad's response to this was perfect. 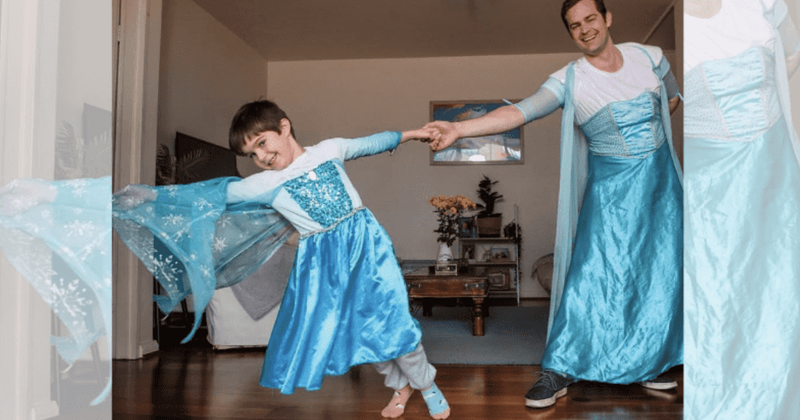 Parenting is not an easy task. You are in charge of shaping the life of another human being. To love them unconditionally is the only thing to keep in mind. While this does not mean overlooking their faults, it does mean putting their happiness first. One dad who has done a stellar job at being the most supportive father a child could want is the Australian author Scott Stuart. He has been by his son's side, encouraging him to be himself. Three-year-old Colin is a big fan of Elsa from the Disney movie Frozen and wanted to dress up like her. Stuart's response to this was perfect.

The 36-year-old admitted that at first, he was uncomfortable letting his son wear a dress. But he faced his own prejudices. "I grew up in a strict family unit under very rigid gender stereotypes, and the fear of being judged by others has stuck with me," he told the Daily Mail. "By breaking a gender stereotype in public, I was, quite frankly, terribly scared and nervous." He wanted to challenge these gender stereotypes and start a conversation. He took to TikTok, to share in a video that is now viral and has over 21.7 million views, how it went when his son wanted to dress up like Elsa to watch the movie.

In the video, Stuart looks unhappy as the caption reads: "My son wanted to dress as Elsa to go to the cinema. I said there is no way you are doing that...alone." It then cut to a video of Stuart wearing a matching Elsa costume with his son. "Last time [at the cinema] my son was very nervous too because he was worried about what people may think, but this time he was completely filled with confidence,' Scott said. His son then asked him again to wear the Elsa dress with him to watch the Frozen musical. Even though he was nervous, he decided to brave through it again for his son.

"When we were driving to the theatre, Colin kept saying 'this is going to be so much fun' and 'we're going to have a great time,'" Stuart recalled. "It's almost as if the roles had switched and he was supporting me this time - even though he didn't know how nervous I was." This video was watched more than 2 million times on TikTok. “I would hope people could look at this video and see a child having the courage to be themselves, and know that if they have to courage to do the same, there will be someone who will stand with them too,” he told BuzzFeed.

The videos gained a lot of attention and while there were people who appreciated Stuart for being an amazing father, there were others who could only be negative about it. "I've received questions from people around the world asking about gender, the transgender community, sexuality, bullying, and concerns around support from family,' he explained. "We were able to have in-depth respectful discussions online even when we didn't agree with each other." Ultimately this experience inspired him to write a children’s book about gender roles and empowerment.

The book is titled, My Shadow Is Pink and in an Instagram post, Stuart wrote about the book inspired by his son, stating: It's about a boy who has a pink shadow that likes princesses, fairies & "things not for boys"... but he wishes he had a blue shadow like everyone else in his family. He learns that everyone has a shadow they wish, at times, was something else... and he has to learn to love and accept his shadow as it is. His latest book is titled, The Very First You and according to Stuart, "It's a celebration of everything that makes you you, and everything that makes you unique - I cannot wait to see this on shelves!"