As a tribute to Parton, there is also a pink chicken wire statue of the iconic singer at the rooftop bar-restaurant. 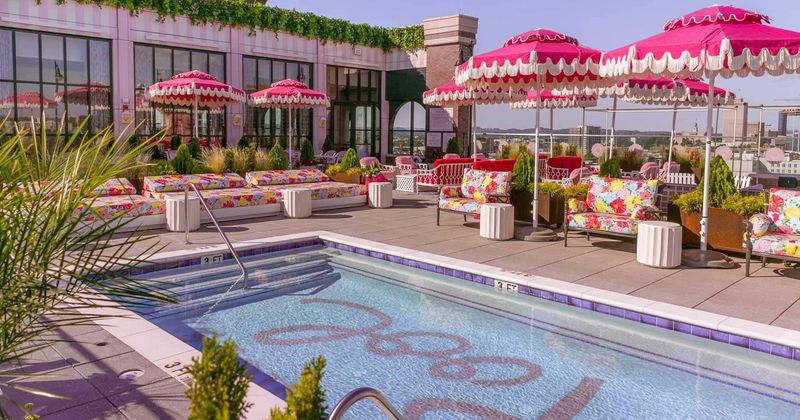 A new rooftop bar-restaurant in Nashville, Tennessee just opened recently and it is inspired by the country singer and songwriter, Dolly Parton. Named the 'White Limozeen' (also the name of Parton's 1989 album) the entire setup is decked mostly in pink and other colors such as white and gold. This indoor-outdoor bar that opened last Friday is part of the Graduate Nashville hotel and one can "take in skyline views as you lounge by the Governor’s Pool under a bright pink umbrella, or pull up a seat indoors at the rosy onyx bar", reads the description on its website. There is something about the colors of this place that reminds one of the American countrysides but also conveys the opulence and luxury of a different place like Hollywood. Well, that was Parton for us!

The blend of styles seems seamless in this bar. "We wanted it to feel really approachable and really feasible for everyone to be there, everyone to have a good time, whether you're drinking a can of Natty Light, or you're ordering caviar. And if you order that caviar, we expect you to spill it on your shirt because you're having such a good time," said Marc Rose, who operates the new bar according to USA Today. He added the new place aims to walk the line between opulence, glamour, and approachability. About the overpowering use of the color pink in the decor of the bar, Rose said it was meant to make a statement and meant to be anything but quiet. "We want to be on a rooftop, shouting from the rooftop that we're up here," he said.

Bedecked with sofas with fuchsia crushed-velvet colors and pink-hued prints, the place does look like some ballroom in the countryside. Rose said the seating areas were meant to invoke the nostalgia of attending a dinner party in a friend's living room. Around the pool, the patio furniture is covered in pink and bright florals, punctuated by potted greenery. There are also hot pink umbrellas featuring scalloped fringe in the area near the pool. As a tribute to Parton, there is a pink chicken wire statue of Parton that can be seen throughout the restaurant. Similar to the White Limozeen, other parts of the Graduate Hotel has loud and bold colors as part of its decor.

"We just generally felt that a lot of hotels are starting to ... really look a lot like each other...We wanted to be totally different," said David Rochefort, President of Graduate Hotels that has 22 other hotels. Graduate Nashville is the newest of the 22 hotels and Rochefort said they wanted this one to stand out from their other hotels. Rochefort added that the hotel and its spaces are more about celebration. Speaking about the White Limozeen he said the restaurant is meant to evoke the idea of following dreams in a big city. "Everyone has a White Limozeen story. Mine was my senior prom, growing up in Los Angeles, thinking that we were getting in a white limousine and we were on top of the world and we had made it," he said.

The bar-restaurant was supposed to open in March but tornadoes in certain parts of the city, followed by shutdowns due to the COVID-19 led to delays.  "It's very difficult to open a restaurant as-is, and to open it during a pandemic and other things that are going on in the world right now and such a call for change in so many different ways, it's definitely not the easiest thing, and we're aware of that," Rose said while adding that they are following all protocols of safety. About the menu, the bar's website stated it was "developed by Chef de Cuisine Chris Lewallen" and "features homestyle renditions of traditionally French presentations. At the bar, you’ll find poolside-friendly cocktails designed by Demi Natoli — formerly of Nashville’s The Patterson House — such as the magenta-hued Queen of the Rodeo."