Clint Edwards and his family were on the road when he had a diarrhea attack. 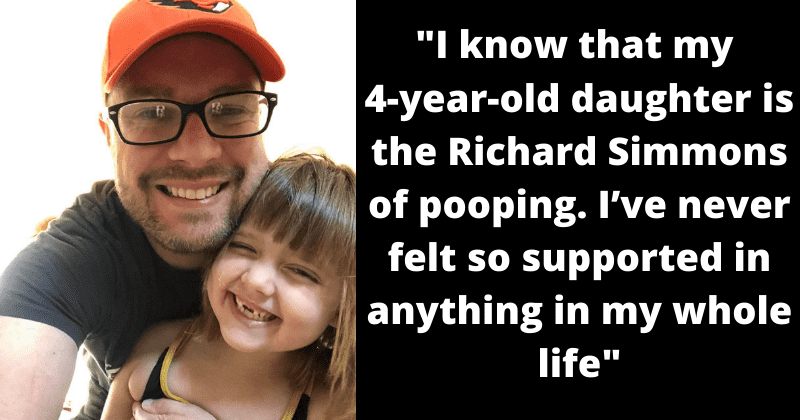 A bout of diarrhea is one of the worst things that can happen to anyone during a long road journey. Add your children and family into the mix and it could also easily turn into one of those embarrassing stories your family members regularly recall when they want a good laugh. Clint Edwards, author and a dad of three had just got on the road with his wife and children to attend the funeral of a relative. Two hours in and he needed to find a loo urgently while he was at a store. In a blog, Edwards wrote:  We stopped at a gas station in nowhere Oregon, two hours into a 12 hour road trip to a family funeral when the diarrhea struck. My wife and two older kids were in the van, while I was inside looking for cornflakes with my 4yo.

After lining up at the restroom, he finally got in but the need to go was so urgent he just took his child with him into the stall. He wrote, "Aspen watched as I struggled." But was surprised when she started clapping and was supportive. Edwards wrote his daughter hyped him up to the hilt: “Good job, Daddy! Good job! You make two poops! Now three poops! I’m four!” Yucky, Daddy. It’s stinky.” That day Edwards found out that his 4-year-old daughter "is the Richard Simmons of pooping." He might just be taking a dump but for his daughter, it was something that was extremely important. He commented: I’ve never felt so supported in anything in my whole life. And Aspen had every intention of supporting her dad till the very end: She commented on the size, smell, and sound. “Wow!” She said. She commented on my work ethic. “You’re trying so hard!”

He added: At one point I had to actually push her face away from the business end of things as she clapped and cried “You’re doing it, Daddy! You’re doing it!”
Edwards said he was not sure what exactly happened that caused him diarrhea: if I’d eaten something wrong, or if it was the stress of traveling with kids. But one thing he was certain about was there had been a "role reversal" in potty training. Edwards wrote: I suppose she’s gotten used to the positive reinforcement Mel and I give her each time she goes. And when I’m cheering her on in our family restroom, it seems normal, even appropriate. But when the roles are reversed, it’s just, well, awkward. Particularly in a public restroom. Of course, Edwards and his daughter were not alone.

There was a man in the next stall who was at first quietly listening to the commotion nearby and probably laughing his guts out without trying to make a sound and "holding back tears of laughter." But in a situation such as this who could blame anyone if they did. The man lost it and "busted loose" when Aspen called her father a “pooping-farting robot.” He and Aspen finally went back to their car with Edwards popping an anti-diarrhea tab. When his wife Mel asked about how long they took, all he did was roll his eyes and tell her, “You don’t want to know.” But their daughter recounted the entire story. He concluded: I sat in the driver’s seat. Mel patted my leg, “Nice work, Daddy.” All I could do was say, “Thank you.” Since being shared on his Facebook page, the story has become widely popular and was liked 29,000 times, commented on 6,000 times, and shared 22,000 times.

It is also part of his book about being married, dealing with his kids, and other aspects of fatherhood that has several other similar hilarious stories.