Ordinary Looking House Listed For $159,900 Looks Like A Spectacular Dream Home Inside

A seemingly normal house starts to get wild with each successive photo captured of its interiors. 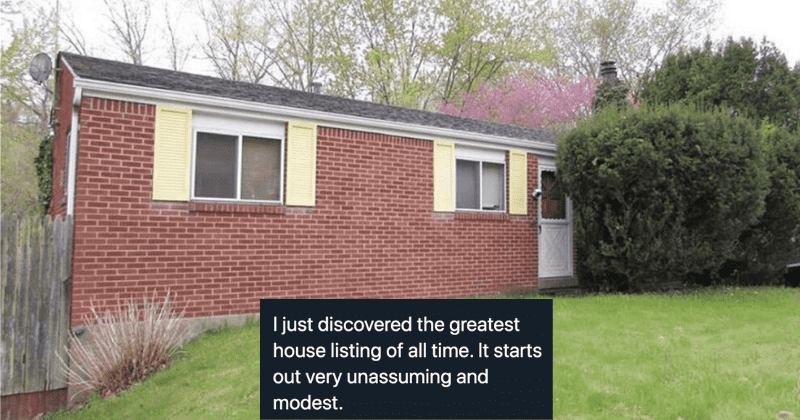 There are a number of things to be accounted for when one sets about purchasing a house for themselves. Firstly, one would find out all the information they can about the place, locale, and owners. However, there are often things that are left to the discovery of the first visit. That's what happened when Twitter user Frazierapproves  found when he unearthed what he calls the greatest house listing of all time.

I just discovered the greatest house listing of all time. It starts out very unassuming and modest. pic.twitter.com/cCubUFd1k4

The seemingly normal looking place is in Pittsburgh, Pennsylvania. While it appears ordinary on the outside, the interiors tell a whole other story. It's almost a take on Alice in Wonderland as you slowly venture more into the house to find the most amazing sights within. This super-gaudy funhouse was available for just $159,900 and it has a bit of something for every taste.

Then, you see the yard and think “wow, that’s somewhat surprising“ pic.twitter.com/PLgPf03wPS

“I live in Pittsburgh and came across the listing via my local subreddit,” Frazierapproves told Bored Panda about how he found the listing. “The front exterior photo is completely unremarkable. It’s very typical of the 1960s Suburban Pittsburgh housing vernacular… particularly in the eastern suburbs. That’s the kind of home they built for middle-class families in the last days of steel. The first surprise came with the photos of the backyard. Not only is the yard larger than one would suspect, but swimming pools are exceedingly rare in this region, due to the hilly topography and small window of summer-like temperatures.”

Then, you see the interior, and think well that’s not quite what I expected pic.twitter.com/RwjsusYaeR

According to the Twitter user, things start to get really weird with the very first interior photo. “The first thing you see is the vaulted ceiling in spiral staircase in what, by all external appearances, was a single floor ranch house. The living room and library appear to have some light medieval theming with a large outer space mural, which is the first indication that we are dealing with something truly special here,” he said.

“Each successive photo reveals another genre-themed room, with an increasing level of commitment. It’s like a miniature amusement park or a home-sized movie studio. It is simply the most amazing home I have ever seen.” It was no surprise that the user's post got tons of attention with over 90,000 likes and 20k retweets. Many people joked that the house is listed for very less considering that it has the contents of a 25th-century spaceship inside.

Then, things start to escalate pic.twitter.com/RqMVzmLWmp

There is just about everything you can find in this former ranch that was later converted into a two-story house. It looks like it has a 13th-century castle living with an elevated library that one can reach by going up a ladder. If that wasn't enough, it has a galley kitchen. The way to the laundry room and the workshop is through a hatch while a spiral staircase leads to the bedrooms, the den area, and a walkway.

And before you know it, WHAT THEE FUCK IS HAPPENING HERE? pic.twitter.com/w3rGyQ7tZb

Looking at the bedrooms, we find that one of them has a tropical island-setting with an indoor beach. The other is a '70s style hippie paradise with a waterbed.

The backyard comes with a pool and a patio so it's pretty much your ultimate magical kingdom.

The twitter user acknowledged that the owner of the house is clearly a fan of genre fiction. The user went on to admit that he's not really in the market for a new home and is more of a city person.  “So that house isn’t for me, but if I had the money, I would scoop it up to use as a retreat/party/clubhouse, without changing a thing… aside from tossing the creepy robot.”

I'm afraid to ask what happened here. Did they have a 16 yo who was like DAD KEEP YOUR WEIRD STUFF OUT OF MY ROOM I LIKE IT THE WAY IT IS pic.twitter.com/nj1K0U4M5l

I feel like I know EXACTLY the kind of people who live there & they're ultimately good, sweet people. They go to a lot of Renaissance Faires & do a lot of tabletop RPGs. They have a large collection of t-shirts that say things like "Normal is just a setting on a washing machine."

He added, “But, more importantly, they are the kind of person who recognizes that a home should be a reflection of one’s own personality. I’ve been in my house for years, and some of the rooms still bear the last owner’s paint on the walls. It’s safe. It’s ‘tasteful.’ This person clearly made the house their’s, and that’s something that all of us who are fortunate enough to own their own homes, should aspire to.”