The "Jatayu Earth Center" is 150 feet wide, 200 feet long, and 70 feet tall and located in the southern state of Kerala 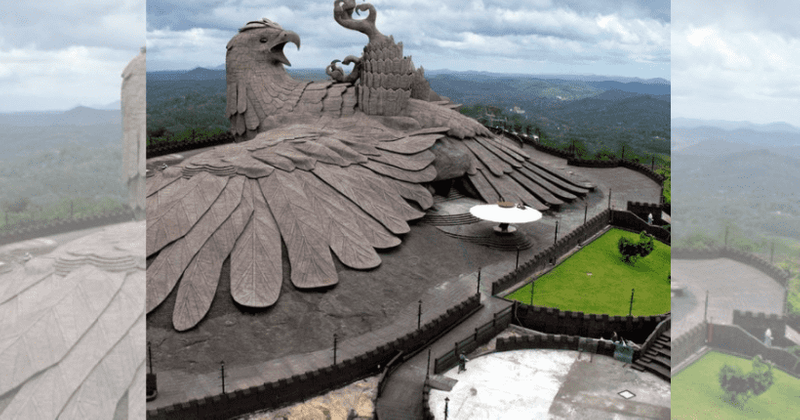 The world's largest bird sculpture is in India and it sure is one masterpiece. Located in the picturesque hills of Kollam in the southern state of Kerala, it measures 150 feet wide, 200 feet long, and 70 feet tall it is massive. The detailing on the sculpture is also stunningly meticulous. It has been designed after a mythical bird from scriptures of the Hindu epic, Ramayanas. The sculpture has been designed to depict the bird on its back with both its wings spread out while it stretches its head and talons up. But far from being just a sculpture, there is also a museum within it, and combined with the sculpture the place is called called the "Jatayu Earth Center." Designed by an art and film director and sculptor Mr. Rajiv Anchal it took him 10 years to complete the whole thing.

"The giant concrete statue of Jatayu is built on a mighty rock named Jatayupara (para means rock in Malayalam)..." according to the sculpture's website. It the largest functional bird statue in the world, something that has been certified by the Guinness Book of World Records. The project is the result of collaborative efforts of the state's tourism department and some "private equity holders" according to the website. Only one part of a project spread across 65 acres of land of a town called Chadayamangalam. One can visit a temple and also get into the cable car ride. According to the Kerala Tourism website, there is also a 6D theatre inside the museum that people can enjoy. There are a number of adventure sports people can engage in such as commando nets, log walk, vertical ladder, chimney climbing.

There is also the Ayurveda, camping, trekking, and live kitchen activities. "Jatayu Earths Center is a glorious example of sustainable and eco-friendly tourism in India. The hills, valleys, caves, and vegetation spread across 65 acres remain almost unaffected even though a crowd-pulling tourist destination is built right there," the website stated. It added, "Moreover Jatayu sculpture stands as a guardian to the hills and rocks by protecting them from mining. Hence the name Jatayu Earths Center is most appropriate for this project." The project faced a number of challenges such as the uninterrupted availability of water source. "After thorough analysis of the landscape, a check dam was constructed between two rock valleys with a capacity of twenty lakhs liters for water conservation," the website stated.

"The water scarcity issue was thus solved by collecting and storing rainwater and using it throughout the year. The ready availability of water enriched the flora of the place. The electricity required for the smooth functioning of the Jatayu Earths Center is domestically harnessed from solar power," it added. Additionally, a planned agricultural society is formed to promote organic farming in the adjoining cultivable lands. With regards to the symbolism behind the structure, the website added, "Jatayu is an embodiment of valor and chivalry. Risking his life, he tried his best to save Sitha from her abductor. Hence the Jatayu sculpture uprights as a towering tribute to women’s safety and honor. Jatayu also represents a bygone era when humans, animals, birds and other living forms cared for each other and fellow begins and lived peacefully on this Earth."

According to Anchal, the symbolism is "relevant in today’s social scenario since the crime rate against women is on a high. Each guest at Jatayu Earth’s Center is requested to understand and emulate the inner meaning of this inspiring creation."