Bruno Lauer had offered Dwayne Johnson a place to stay and stuck with him through tough times. Now, 'The Rock' wanted to repay him for his support. 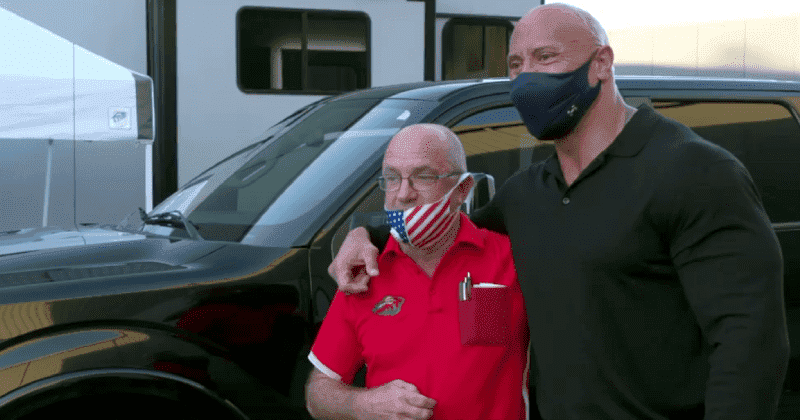 Bruno Lauer worked as a WWE wrestling manager in the 90s and is not a name that really rings a bell. For Dwayne 'The Rock' Johnson, however, Lauer means the world. When the Hollywood superstar left Hawaii for Nashville, it was Lauer who offered a home to the teenager. After his Mom and he were evicted from their place in Hawaii, Johnson was sent to Nashville to live with his father. But upon landing in the place, he learned that wasn't going to be the case. He was going to be living with a stranger. Bruno Lauer welcomed the homeless teenager to live with him in a tiny room at a motel. Johnson then went on to become 'The Rock' and subsequently, a movie star. Through it all, The Rock always kept it touch with Lauer. He was a constant in his life. This is why he wanted to gift his friend something to thank him - for all the times he stood with him. Earlier this month, The Rock posted a video on Instagram, showing him meeting Bruno and then gifting him the new pickup truck as a gesture of thanks.

"My life (especially my teenage years) has been full of the wildest twists and turns, and yet God and the universe has always found a way to put a few people in my path that would change the trajectory of the road I was going down. Meet one of my lifelong friends, Bruno Lauer — or I prefer to call him, 'Downtown Bruno',” he wrote on Instagram. "My mom and I were evicted off the island of Hawaii and I was sent to Nashville, Tennessee to live with my dad. When I landed in Nashville, I quickly found out I wasn’t gonna live with my dad. Shit happens, plans change and that’s the way it goes," he added.

The Rock is still thankful to Bruno for helping him find his feet when he had no place to go. "Bruno could’ve (and should’ve) said, 'hell no, I’m not takin’ in some kid who I don’t know.' But he didn’t. He took this punk kid in and we became lifelong friends," wrote Johnson. Bruno Lauer worked as a WWE wrestling manager under the name Harvey Wippleman in the 90s. Even when Dwayne Johnson, as he was known back then, started his wrestling career in Memphis, Tennessee, it was Lauer who helped him out by offering his trailer to stay in until he would make it in the profession. He would go on to become one of the biggest names and attractions in wrestling history.

Lauer also helped buy The Rock his first car. "When I was 15yrs old, Bruno even gave me his last $40 bucks so I could hustle a crackhead out of his car one night at a honky tonk in Nashville. But the hustle was on me, because when I took off down the road there was a SECOND CRACKHEAD passed out on the floor in the back!" recalled The Rock. Lauer and The Rock were reminiscing old times when he asked him to turn around. Lauer turned around and The Rock told him the pickup truck they were standing in front of was for him — a Ford F-150. Lauer couldn't believe what he was hearing. "Are you serious?" he asks. He then turns to the man he once took in and asks if he can hug him, because of the pandemic. The Rock asks him to pull up his mask before the pair share an emotional hug. Lauer gets into the truck and tells the actor, "I love you man, and not because of this, because of who you are."

"Merry Christmas, Bruno, and since you helped me “buy” my first car, I figured I could return the favor and buy you one that 100 percent does NOT have a crackhead in the back seat. I love you, brother. Your kindness and heart helped change my life’s trajectory. When you’re ready to retire from 'the business' you just say the word. I got you covered. We’ll go 'downtown',” wrote the actor.