Videos of the parades went viral online, with many of Trump's supporters commenting on its unprecedented nature. 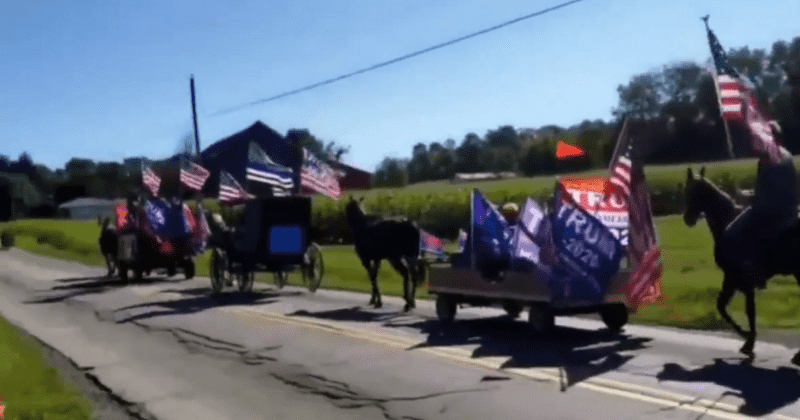 The highly conservative Amish community, who mostly live in certain parts of Pennsylvania and Ohio, usually shy away from anything political. But a few days ago, clips of many of them showing their support for Donald Trump in the upcoming elections have gone viral. They were seen as a part of a parade in their characteristic horse-driven buggies fitted with the American flags and Trump banner. Others were seen riding horses, as well as buffaloes and cows, covered in Trump signage. These sights are surely going to leave Trump and his campaign team impressed. There were immediate reactions from Trump's supporters, with many like Fox News contributor Rachel Campos-Duffy even claiming that this was something that was never seen before.

She wrote: Amish Trump parade. Trump parades boat, car rallies are happening all over USA. They’re not organized by the campaign or local GOP. They are organic & people-powered. This is a Trump phenomenon. Never seen anything like it before in American politics. Another Twitter user highlighted: Talk about shy Trump voters, that Amish Trump parade in Fredericksburg Ohio was so cool. The polls dont capture people that were never motivated to do stuff like this before. Twitter user Sutton1634 had this to say: Things are really bad when the Amish, who are known to separate themselves from “the things of this world” including no TV or Internet; are holding parades, and allowing images of themselves to be taken in order to promote a political candidate.

One video of the parade showed a group of horse carriages and people in horses passing through a rural area with American flags and banners. The user that posted the video noted that the parade was in Fredericksburg, Ohio. The video was viewed over a million times. Another video by the same handle showed a parade in a more urban setting, with a line of bystanders taking pictures of the parade from the sidelines. Both the videos were shared and liked thousands of times with comments welcoming the statement made by the usually reclusive community. However, while they may be shy, it is not uncommon for the Amish to vote. They have traditionally aligned themselves with the GOP, especially on issues such as abortion and those relating to same-sex marriages, according to a report in The Washington Post.

@realDonaldTrump even these great Americans "living in an Amish paradise" have your back and support you fully.https://t.co/htve9Jujog

Historically, George W. Bush and his father George H.W. Bush were the only two sitting presidents who reached out to the Amish people, according to Steven Nolt. He and his colleague, Kyle Kopko from the Elizabethtown College in Lancaster County, are the foremost experts on the Amish's political preferences. They also highlighted the work of the Amish Political Action Committee (PAC) that has been working to get the Amish community to vote since 2016. They are now working to get them to vote for Trump. There are as over 300,000-plus Amish people in the country, of which only 1,019 cast their votes in 2016. Back in the '90s, less than 450 even registered to vote. The Amish PAC recognizes the potential of the group in helping Trump win.

I love the boat parades, car rallies, truckers & bikers for Trump but the Amish Trump parade touched me deeply & brought tears to my eyes. They know their liberties are on the line. 🙏

According to a Post Gazzette report, the two researchers said it was likely that those from the community who voted during last presidential elections did so for Trump. But even the founder of Amish PAC has admitted, persuading Amish voters to vote for Trump has not been easy. “Trump was actually kind of a hard sell. Someone like [U.S. Sen. Ted] Cruz probably would have been a slightly easier sell,” said Ben Walters, a co-founder of Amish PAC. But the community's opposition to Democrats and what they stand for is probably a bigger factor in voting for Trump. Speaking about the last general elections, Nolt said, “I did not hear of anyone anecdotally who voted for (Hillary) Clinton. I’m really doubtful that there were many [votes for her].”

When the AMISH get super involved in politics, and enthusiastically show their support for the President... you know history is being written...

Kopko added, "It’s difficult to say precisely (what motivated Amish voters to come out to vote in 2016) because there is no hard data.” However, there seems to be some anecdotal evidence to the contrary as well. A few months ago, in the midst of the Black Lives Matter movement protesting the murder of George Floyd, a group of Mennonites were filmed standing in solidarity with the movement. The video went viral on Twitter, with several commenting on how this demonstrated the dire straits of the current political climate in the country.