trending celebrity people lifestyle news animals
Teenager Buys 170 Flowers, One For Every Girl In School So No One Feels Less Special On Valentine's

Teenager Buys 170 Flowers, One For Every Girl In School So No One Feels Less Special On Valentine's

The teenager took help from his mother and decided to give flowers to all girls from 6th grade to 12th grade who attended school on Valentine's Day. 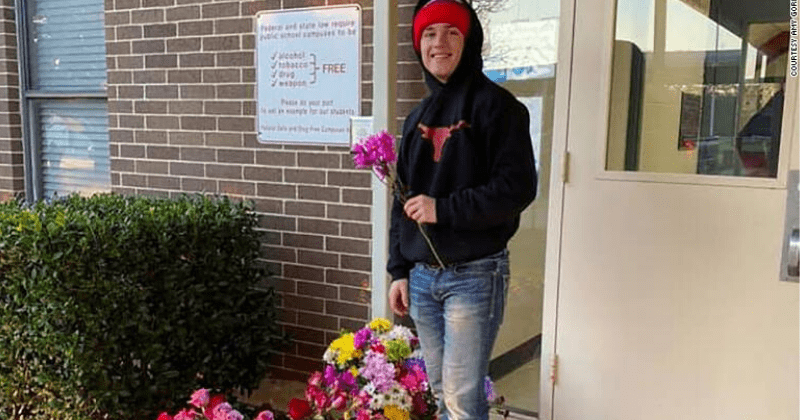 Valentine's Day can be a rather lonely, dreadful, and heartbreaking experience for people in high school. If you don't have an admirer, you miss out on cutesy notes, flowers, and chocolates delivered to you secretly or put in your locker. But, this wasn't to be the case at Axtell High School in Waco, Texas, for there was a sweet teenager, Jayme Wooley, a sophomore at the school. Wooley didn't want any girls in his school to feel alone or left out for not receiving any gifts on valentine's day. So he changed that by buying a flower to every one of them in his school.

Asked where the idea came from, Wooley said he had seen some girls not receive any gifts the previous valentine's day and he felt he had to do something. Speaking to CNN, Wooley said: "Over the past couple of years that I've been at Axtell, not all of the girls were able to get flowers and stuff. Sometimes, it'd just be a secret admirer or popular girls. It felt heartbreaking knowing that not every girl was feeling special." So, guess what he did? He enlisted his mother for help, bought 170 roses and handed them out to all the girls from grade 6 to grade 12 that came to school on Friday. "He handed me a flower and I thought it was really special because not everyone gets a flower on Valentine's Day," Kendall Sherrill, another sophomore, who received a rose from the 15-year-old, said.

Amy Gordon, Wooley's mom, meanwhile, said she wasn't surprised by her son's behavior when he approached her with the idea. "He's always been that type of kid," she said. "It made me very happy that he was thinking about others and how he's thinking about everybody and not just one girl." A post of the 170 roses, shared by Gordon on Facebook, has received over 2.3k likes and 4.8k shares and over 300+ comments. "We've gotten several messages from older women around their 30s and 40s saying thank you and that Jayme's their hero because they were that girl that never received a flower," Gordon said.

Wooley, meanwhile, spoke about his experience making girls in his school happy and said: "I'll probably never forget that moment of just seeing their faces brighten up," Wooley said. "I don't want anybody to feel less important than anyone else."

Disclaimer : This is based on sources and we have been unable to verify this information independently.