The three boys pulled a young child and a dog to safety with their quick thinking. 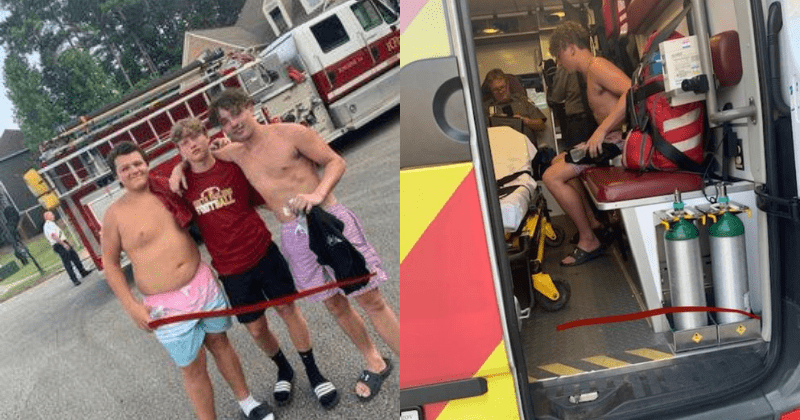 There comes a moment in life when you have to put your own self below the needs of others in a bid to help them at crucial times as these kids did. Three teenagers from a Georgia high school are being hailed as heroes after they quickly ran in to save the residents of a burning home. According to WSBTV, Ryan Seymour, Pearson Blair, and Kai Keller were all together on July 18 when they saw a house caught in flames. The teens from Paulding County High School didn't waste a moment before jumping into action, as they rushed into the house. Jason Nash, the Head Football Coach for the school, took to Twitter to share the heroic of his students. Blair reportedly rushed inside the home and got a child who lived there and a Great Dane out safely while Seymour and Keller grabbed at a water hose nearby in a bid to put out the fire.

@SPauldingHS_ATH @SPaulding_FB Huge shout out to Ryan Seymour Kai Keller Pearson Blair. These young men saw a house on fire 2 grabbed a water hose 1 ran in to help get people & pets out. Being selfless & a good human being isn’t hard. Proud to call them SPARTANS!!! pic.twitter.com/7cuMrCFeAo

As per the boys' accounts, the blaze was so hot that it broke the windows. Meanwhile Coach Nash said that he had always taught his players to care for the community because that's "who we are" and the teens' actions on this fateful day was a perfect demonstration of the thought. The coach talked to People and explained how proud he was of his team. He said: "It amazes me that three 14-year-old boys jumped into action without hesitation. My first reaction was a great big smile and to show my wife about how courageous these three were. I am beyond proud of them, and they deserve every bit of recognition they can get," he added.

Three South Paulding High School football players weren’t playing around when they saw a house on fire over the weekend.https://t.co/yOcBoO1w3F pic.twitter.com/9lpZGPhPKG

Paulding County Fire Department is investigating the matter and it is still unclear what caused the fire. Meanwhile, Nash tweeted a picture of the teens' rescue act and wrote: "Being selfless & a good human being isn’t hard. Proud to call them SPARTANS." He said his athletes are "true teammates" and boys that "anyone would be proud to claim as their sons." "[They're] the kind of teammate everyone wants because you know if you need help or just a pick me up they’ve got you," he explains. "They are extremely hard working and want to be champions in any endeavor they are involved in." Nash said even though they saved people in spite of the impending danger, he said they didn't consider themselves to be heroes. "They simply said they did what they did because it was the right thing to do and people needed help."

Nash continued: "As their head coach, I’m proud because my staff and I are always preaching about how football is bigger than the individual," he adds. "It extends into our communities and to those who can not help themselves and we should always set the bar when it comes to being good students, friends, siblings, sons, future husbands, and men of character and action." People reacted with nothing but praises for the boys and their selfless act. Scott Chapman wrote: "Excellent! During these times we need human stories like this. We can only take so much political and covid programming. Well done men!" Sonja Yerta wrote: "SPARTANS do great things." Georgia Governor, Brian P. Kemp also heard the news and lauded the efforts the boys put in, he wrote: "Thanks to the heroic actions of Ryan Seymour, Kai Keller, and Pearson Blair this weekend, a Paulding County family and their pets are safe from harm. Great work, and thank you for looking out for your fellow Georgians!" Bricolivia wrote: "Paulding county is full of heroes. We're proud of these three young men."

Thanks to the heroic actions of Ryan Seymour, Kai Keller, and Pearson Blair this weekend, a Paulding County family and their pets are safe from harm. Great work, and thank you for looking out for your fellow Georgians! https://t.co/mytDnV54jV