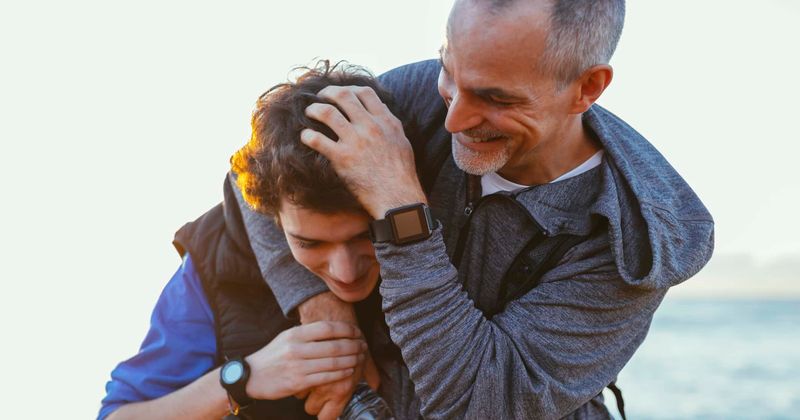 Trigger Warning: The story has disturbing details of violence leading to an unintentional case of death

A father of a teenage boy in the UK died after he was slapped by his son while they were "horsing" around. The father-son duo would regularly engage in a physical game of slaps but this one occasion outside the Reading town center went extremely wrong. Malcolm Callender, 48, an ex-army man, and his 19-year-old son, Ewan had just finished watching a game of soccer in a bar last year in April.  Ewan told the inquest, "Dad slapped me around the face on the way out just because we were messing around. It is just normal. There was nothing aggressive about it." Ewan's friend named Luke Key was also with them. According to The Sun, Ewan said, "We started walking towards the station, we must have been in mid-conversation Dad said, ‘right, you can have your free shot. I knew exactly what he meant, I get to slap him now. Luke was like, 'come on, you do not want to do that because you know you are going to lose.'"

According to witnesses, Ewan clenched his fist before slapping his father. It sent him flying backwards before he hit his head on the road. Ewan was heard screaming, "Wake up Dad! Dad I love you!" Callender was transported to a hospital but died in the early hours the next day. The cause of death was listed as "blunt force trauma to the head" which lead to an acute subdural hemorrhage. Ewan was arrested at the scene. CCTV footage showed Callender hitting Ewan but he was reluctant to hit his father back and instead embraced him. Key also told the inquest that he witnessed Callender slap Ewan, and they were both happy and laughing. Key said Callender challenged his son and told him "he’s got to do it."

Key said his friend did not keen on slapping his father in return. "I could see in Ewan’s face that he really did not want to do it although I got the impression that he had something to prove to his dad. Ewan looked up to his dad as he was a higher-up figure in the Army and he wanted to make his dad proud," he said. Key added, "Ewan and I are aware of a game which I call slaps. There are videos of it all over Facebook. Normally people have three goes each and a judge works out who wins. It is a bit of an Army thing and Ewan and Malcolm had that sort of relationship. He always had a strong relationship with his dad." Catherine Morrison-Callender, Ewan's mom also told the court that the slap game was a common game played between them.

Very unfortunate. Poor boy has to live with this for the rest of his life.

Catherine said, "As a family, we would always be messing about with each other and we would be giving each other quick little digs in the ribs which we called ‘fingers of steel.’ We would wrestle with each other where we would try to grab the other person and take them to the ground. Another game we would play was slaps." She added. "When Ewan was about 15 years old, he and Malcolm would progress to try to slap each other around the face. Malcolm would always be winding him up, saying, ‘you reckon you can take me yet?' Malcolm was very competitive so he would never let Ewan win, he would use it as a reminder that Ewan was not quite big enough yet." Catherine said the game of slaps they played the day of the tragic incident "sounded just like the games that they had been playing together since Ewan was a kid.”

Toxic masculinity kills. How devastating for this boy. https://t.co/AhtCvQhx0V

According to assistant coroner Ian Wade QC, Callender's death was caused while engaging in "non-aggressive, not hostile, consensual horseplay" reports The Telegraph. He added, “The law recognizes that consent is a legitimate concept in the law of assault and the application of force that is consented to, is not assault. You are allowed to consent to the application of force in sport, after all if it were not so then every contact sport and every martial art would be against the law. It seems to me that what took place here fulfils the definition of horseplay." Ewan was not charged with his father's death.