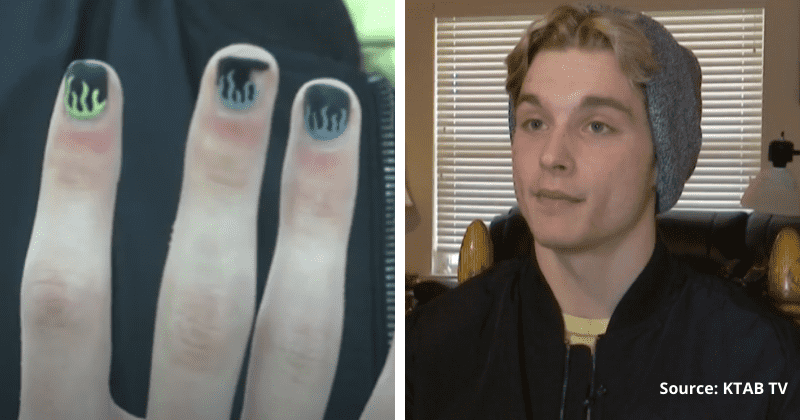 Trevor Wilkinson, an openly gay student at Clyde High School in Texas said that he was suspended for wearing nail polish. Wilkinson tweeted: imagine your school not allowing boys to paint their nails and giving boys iss for it. and the whole administration being okay with it, homophobic and sexist? welcome to west texas. According to NBC News, the 17-year-old said he received the suspension on Monday after he returned from Thanksgiving break. His painted nails reportedly violated the school's dress code.

The student handbook states that men are not allowed to wear make-up and nail polish. If a campus administrator finds that a student is in violation of the dress code the "student will be given an opportunity to correct the problem at school. If not corrected, the student may be assigned to in-school suspension for the remainder of the day, until the problem is corrected, or until a parent or designee brings an acceptable change of clothing to the school. Repeated offenses may result in more serious disciplinary action in accordance with the Student Code of Conduct."

Love you, Trevor. If you’re ever in Houston, DM me. Let’s get manis together. Some people just can’t stand it when other people are fabulous✨

Wilkinson felt that this is a complete double standard because girls at the school are allowed to have painted nails. "It's really sad to me because I feel like it's 2020 and we should be progressing and not taking steps back," he said in a phone interview on Saturday. "And it makes me really sad because I know that there are other people who feel like this and feel like they can't express themselves and that they never will be able to because of people like this, who are not open-minded enough to see another perspective." He claims that senior officials told him that if he did not remove his nail polish, he would remain in suspension. "I'm not taking off my nails and I'm staying in ISS because it's completely wrong," he said.

The teen has since started an online petition to dispute the school's policy. He wrote: Today, I got ISS (in school suspension) for having my nails painted. I was told that I will continue to get ISS until I take them off. It’s a complete double standard because girls are allowed to paint and get their nails done. Not only that, but freedom of expression is validation enough that the dress code and policy is not okay. I am a gay male and I’m beyond proud. This is unjust and not okay. Help me show that it is okay to express yourself and that the identity that society wants to normalize is not okay. I am a human. I am valid. I should not get in trouble for having my nails done. Sign and share this so people like me don’t have to ever deal with this again. It’s time for a change and that time is now.  The petition has over 66,000 signatures and counting.

@trevvowilkinson got a fresh set of nails today. His story went viral when @clydecisd put him in ISS for his painted nails. Trevor is not backing down. pic.twitter.com/oZv84BSzTg

The Clyde Consolidated Independent School District has responded with a statement that it "conducts a diligent and thoughtful review" of its dress code policy on an annual basis.
"That review process results in the development of a final dress code that is consistently implemented and enforced during the next school year. Parents and students are provided a copy of the dress code prior to the start of each new school year," the district said. "Questions or concerns with the dress code are reviewed individually, and the District cannot share any information regarding a specific student."

The teen has received tons of support online and thanked everyone on Instagram writing: Thank you everyone for your support. I cannot express that enough and I could not have gotten this far without you guys! I know a lot of you have called and emailed my school board - flooding their voicemails and inboxes. Thank you for standing alongside me to create change so that students like me can express ourselves in authentic ways in school and focus on our studies rather. As well as ending the gender norms that society has oppressed on us. Please continue to call and email but for those of you who want to challenge dangerous gender stereotypes you can join me in painting your nails and rocking them all over Texas and the country. Paint your nails and put #TeamTrevor !!@equalitytexas @aclutx @abi.pride #TeamTrevor #Equality #NailsRock Again, thank you all for your support and our voices will not go unheard.