trending celebrity people lifestyle news animals
Teacher Adopts Favorite Student After Her Guardians' Death: "She’s Such A Blessing To Have"

Teacher Adopts Favorite Student After Her Guardians' Death: "She’s Such A Blessing To Have"

Valencia Maiden stepped in to become a foster parent for her student, Jamie, after the last of her family died. She was officially adopted in July this year. 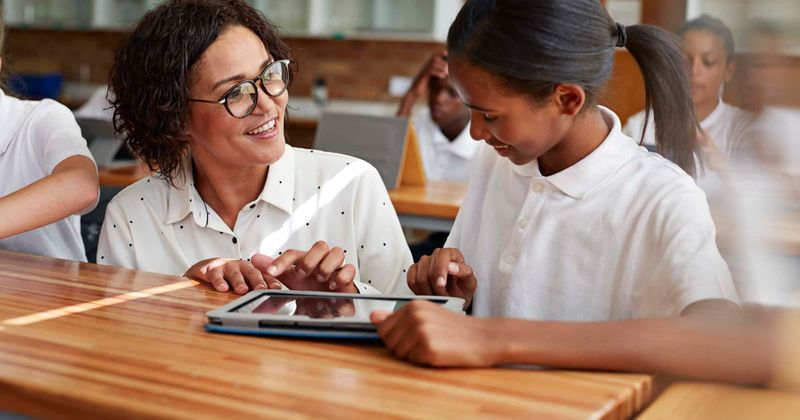 Jamie has been a student at the Glen Iris Elementary School in Birmingham, Alabama since kindergarten. A straight-A student, she also stood out for her bright red hair in school. However, life was a struggle for her. Her father was out of the picture since the beginning and her mom had her parental rights severed when she was in second grade. Jamie was then under the care of her grandparents and things were going on fine for a while. But tragedy struck again when her grandma died. Then, it was just her and her grandpa.  A hard worker, he kept a job as a mechanic while at the same time looked after his grandchild. At school, a teacher named Valencia Maiden who taught the girl had a special place in Jamie's heart.  The two became especially close when Jamie was in fourth grade.

Warning, y'all: This one is going to make you cry. https://t.co/177TxEiSVl

She would help her student with homework in the after-care program and would cheer Jamie in all her endeavors. They were so close that sometimes she was even allowed to stay overnight at Maiden's home. But even Jamie's grandfather did not live very long and one day in 2018, she was informed that he had died. Speaking about Jamie's grandpa, Maiden told AL.com how he “absolutely loved her.” She added, “He did anything and everything for her." Maiden added when he came to pick her up from school, "he would have worked a long day and would be covered in grease.” He treated her like an adult. “He talked to her like she was a mini-adult. He was an awesome man. I was really blessed to know him,” said Maiden. The elderly man's death meant Jamie would have to move away or be put in the foster care system.

A friend of mine here in WA adopted her daughter after she was in her class for a year. Both parents voluntarily terminated their rights years before. The child & her new mom were able to do a kinship adoption. Adoption stories can be problematic, but these stories are good.

Maiden knew there was no way she could lose her beloved student and immediately stepped in to help. Maiden, who was single and childless at the time, decided to become Jamie's foster parent. "I couldn’t imagine her leaving and never knowing what happened to her. She was special to me. The opportunity presented itself, and I had to at least try. So we went for it,” said Maiden, who assured Jamie's biological mother she was not trying to replace her. Just "support her in any way" she needed. Jamie had to remain under someone else's foster care for a short time as her teacher sorted out complicated paperwork involved with the procedure. Jamie moved into Maiden's two-bedroom apartment once she became the official foster parent. “We were so excited about everything,” said Maiden.

I love this story!

Finally, in July of this year, Jamie was officially adopted by Maiden. It was one of the happiest occasions in the two people's lives and was marked with a parade by a coach from their school. Dr. Mike Wilson, former principal of Glen Iris Elementary School said, "In my 28 years in education, I’ve seen teachers do a lot of wonderful things – making sure students had food, clothes, Christmas or other holidays when they knew they wouldn’t have them at home – but for a teacher to have such a strong relationship, for circumstances to be where Jamie became homeless overnight because her grandfather died, Valencia didn’t hesitate. There are no words to describe it. It’s humanity in its greatest form.” Jamie still refers to her teacher as “Miss Maiden” and kept her last name.

This is my co-worker! She is awesome

“I don’t want to pressure her. She’s lost so much in such a short time – her grandfather, her dog, her grandmother, not being with her mother,” said Maiden. She knows her adopted daughter is one in a million. “I have a beautiful red-haired girl who’s growing daily. She’s an avid reader, great at drawing and painting, loves animals, loves to listen to music and watch TV,” said Maiden. She added, “She’s a well-rounded, loving, sweet little girl. She’s such a blessing to have." Maiden has set up a college fund for Jamie where anyone can contribute. If they want to, they can send in a check made payable to The American Fund, c/o Jeremy Young, Legacy Advisory Group, 36 Manning Place #200, Birmingham, AL 35242.

Recently we wrote a similar heartwarming story of a special education teacher in Massachusetts, who adopted her 14-year student with Down Syndrome after his single mother succumbed to terminal cancer.