The woman was walking on the road with her five kids who were barefoot. 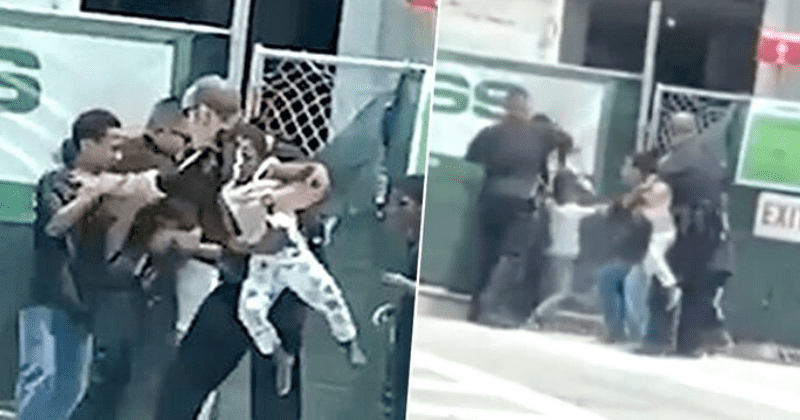 A video posted on Twitter shows Tampa officers physically separating a woman from her five children. Cops responded to a call about a "woman in distress" who was walking in the street with her kids. When they arrived in the downtown area, they saw her walking on the road with her five barefoot kids, reports TMZ. Many people think the way the police officers approached the scene was completely wrong. One male officer was seen trying to restrain the woman against a construction fence. Another officer, also male, was holding a girl in one hand while trying to push back three young boys who appeared to be trying to take the girl from the officer.

Tampa PD responded to the incident in a series of tweets and also spoke to The Tampa Bay Times.  Officials said officers were dealing with a woman “under severe mental distress.” The department said it received a report at about 12:40 p.m. of a mother "in apparent distress” walking in the roadway near N Ashley Drive and W Tyler Street with five barefoot children. The woman “refused assistance while walking in and out of traffic.” The department said, "Officers intervened when the mother attempted to walk on the interstate out of concern for the safety of her and her children. Officers attempted to detain the mother for her safety after her repeated attempts to enter the interstate. While doing so, the children were not wanting to be separated from their mother. Officers were trying to prevent the children from being harmed while trying to detain the mother."

It Shows loud and clear that Barbers need more ed to cut hair than our police do. You had ZERO compassion and did not bring in a social worker. She was likely having a health or mental health crisis. Your department has proven time and again that you do NOT serve and protect us!

The woman was taken by the police to a hospital for observation. The children were also taken to be with their mother. No one was injured and no one was arrested, they said. But many criticized the way the situation was handled. People online called for ways of de-escalating situations without the need for force or worse. kdevil66 tweeted: Social Worker should have been called instead, the police did not look prepared to handle this situation. This is a good example of areas where police should stay back away and have someone with this type of experience handle the situation. baginski_lisa added: This is why police need to be defunded, & helped by funding agencies to help them w/this kind of call. They cannot our do everything themselves, clearly. This takes experts, who we have in abundance, who are not being utilized. Our mental health professionals need to be called. QueenCreo remarked: Prime example of #defund the police and put more funds into #MentalHealthMatters. Had they had a MH Emergency response team would have been beneficial to not only the mother but the kids, to calm their fears. So much wrong with this.

There is a major mental health crisis in this country and the Police are not trained nor should they be handling cases like this, but at the moment it’s what we have. Change is coming but it’s not coming soon enough.

Police officers are being criticized for the way they handle both violent and non-violent situations. Similarly, we reported that a woman from San Antonio sued the city after she accused an officer of searching her in an improper manner and pulling out her tampon in public. The 2016 incident has resurfaced to highlight the way officers use unnecessary force. Natalie Simms was sitting on the curb and talking on the phone when police officers came to the scene as they thought she had illegal drugs on her. They asked to search her car and a female officer was to check her if she had any drugs on her as well. According to the lawsuit, Officer Wilson intended to reach down into Natalie's pants and made contact with her pubic hair and vagina. Simms told the detective that she was on her period. Five male officers watched on as Wilson "pulled open Natalie's pants and underwear." She pulled out her tampon "knowing that Natalie was on her period," and even though "Natalie had not consented to such a search, seizure, and/or use of force," according to the lawsuit, Insider reported.

Ok, I saw this yesterday and was so disturbed I didn’t want to read the entire article just yet. How utterly mortifying and traumatic, honestly. I don’t know under what circumstances lead to this, (maybe he thought she hid drugs there?) but c’mon man! Seriously fucked up!

"City lawyers offered $205,000 to Simms; the city council had to vote on the proposed settlement as Simms and her attorney have agreed to that sum. But many on Twitter felt that the sum she received was nothing compared to the violation and humiliation she must have felt.  erikawas tweeted: Not even close to enough $ for that. Simms is now over 40 years old and continues to be traumatized by the incident. She never received a formal apology from any official over the incident, it was reported. The officer in question retired in 2017.

This is insane! I mean even if you thought she had contraband hidden, you wouldn’t do that in public, in front of people. Christ! What even warranted them searching a woman sitting on a curb, talking on the phone!? Of course she is “retired”. No repercussions