The video was captured by Hans Nilsson, a Municipal council member, after three years of attempting to photograph the animal. 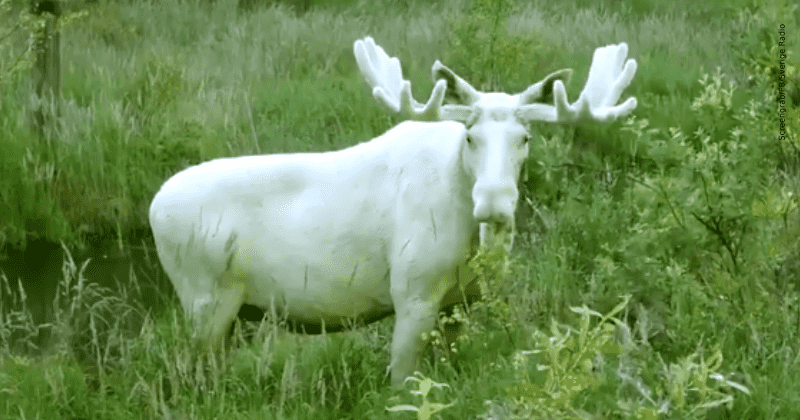 A rare completely white moose has been spotted in Sweden. It was Hans Nilsson, a local politician, who captured the video of the moose wading through the water Värmland region in the south-west part of Sweden. Nilsson is an avid nature lover and has always attempted to capture pictures or video of the rare moose, he told Sverige Radio. Hans Nilsson, a Municipal council member, said it took him three years to get the footage that has since gone viral on the internet. He said the moment was worth the wait as he watched the fully white bull moose crossing a shallow lake before shaking itself dry and walking through tall grass, reported The National Geographic. The moose has an ethereal feel to it as it wades through the water effortlessly. A closer look at the footage reveals to moose to be entirely white, with soft white velvet coating even its antlers.

Unlike initial speculation, the animal's all-white look isn't a result of albinism, a congenital condition that results in a loss of pigmentation. People and animals with albinism have light or pinkish eyes but that wasn't the case with the white moose spotted in Sweden. The bright white fur is the result of a recessive gene that causes the animal to grow white with specks of brown, which is a condition called piebald. In recent times, more videos of the white moose have been surfacing on the internet. In June, two white moose twins were spotted in Norway. The video was from far so the footage wasn't as clear as one would have hoped. Lee Kantar, Maine’s state deer, and moose biologist, said the video was detailed enough to determine in the set of moose were albino or piebald.

Kantar said the white moose remains rare. “Moose researchers pass around photos, and every year or two, we’ll get a photo of a white or piebald moose come across our desk, but it’s not very often,” said Kantar, reported National Geographic. Albino and piebald moose are protected animals in many parts of Canada. With more visuals of white moose being captured, it's believed the number of piebald moose are on the rise. Göran Ericsson is a professor of elk and moose for the Swedish University of Agricultural Sciences said the rise in the number of piebald moose was reflecting in the increased number of visuals over the past few years. Ericsson says the moose will grow more in number with hunters not killing the white moose. “Hunters have chosen to not kill any moose that are light,” said Ericsson. With the moose being more protected, natural selection will make the condition more common, says Ericsson. “It is kind of like dog breeding,” he noted. “They [hunters] choose to select for traits that otherwise wouldn’t have occurred.”

However, there is no definite database that keeps track of the number of white moose in the region and the increased visuals are the only indicator of the growing population of the piebald moose. White moose have also been spotted in North America in Alaska, and Canada. In these regions, the number of predators is high and could limit the population of the white moose. Wolves and bears are abundant in these regions and experts suspect its white fur puts the animal at a disadvantage as it stands out in the forest. In Canada, the government has prohibited hunters from killing moose that are more than 50 percent white in color.