George Ahearn thought this was a one-time endeavor until he realized there's too much work to be done. So he started a non-profit. 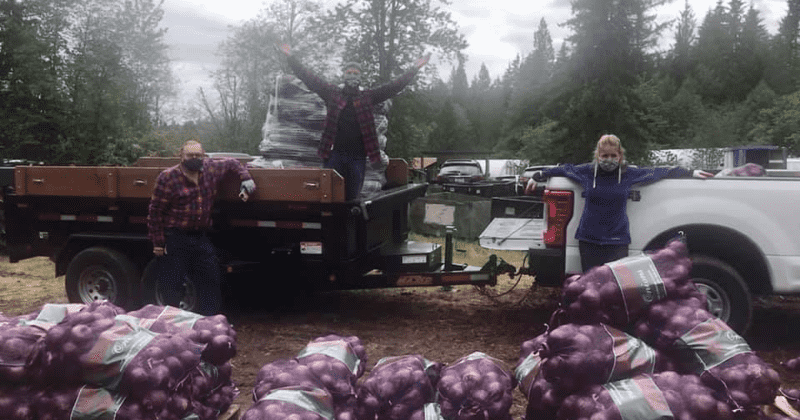 The pandemic has affected just about every industry out there, effectively bringing humanity to its knees. Jobs have been lost, income streams have been destroyed, livelihoods have been affected and life as we once knew it, no longer seems attainable. At the moment, affording the basics such as food and shelter are proving to be a challenge for a vast majority of the population. Farmers who were used to growing onions and potatoes are suddenly without buyers as supply chains have been utterly demolished. George Ahearn, a Washington resident, simply couldn't sit by and watch farmers from his state suffer the ungodly fate. So, he decided to step in and be a conduit between the farmers and the hundreds of food banks across the state. According to GoodNewsNetwork, Ahearn has so far rescued over 200 tons of vegetables and has directed them to food banks to help those in need.

George Ahearn's original act of kindness grew into the EastWest Food Rescue, an organization that aims to raise money for farmers and direct excess farm-grown crops towards food banks. https://t.co/02maIog5UG

Farm supply chains and customers have both been one of the victims of the pandemic. So without buyers, much of the crops were either destroyed or left to rot. In rural Washington, farmers hoped they could at least send the crops out to food banks in Seattle. Ahearn clearly understood the situation and so he went on Facebook to ask if he could borrow a truck or trailer for a day so that he could haul over 2,000 pounds of onions and potatoes. Inspired by his act, he received 4 trucks and 2 trailers through which he hauled 9.3 tonnes of crops for people going hungry. What started as a noble act has turned into a full-fledged non-profit called EastWest Food Rescue. It has now saved over 2.4 million pounds of food from fields across the state while also receiving enough donations to compensate for the losses farmers have endured.

“We’ll take it if they want to give it away for free, but I always wanted to find out from the farmer what their needs were, what their costs were, and at least try to cover their costs." - George Ahearn, EWFR Director of Food Acquisitionshttps://t.co/GkfUx8D9GE pic.twitter.com/6esdsBAc7c

Speaking to Seattle Times, Nancy Balin, one of the respondents to Ahearn's initial requests, said: "The whole thing started because of COVID. They immediately lost all the restaurant contracts they had for these quality potatoes and onions. And since European countries were shut down, they weren’t exporting them because their restaurants were closed."

Things grew pretty quickly as Ahearn had to rely on several locals for his first run. Zsofia Pasztor, a farmer and someone who ran non-profit donated crates and boxes to aid with the transportation of crops to food banks because the latter had said they couldn't accept a semi-truck load of loose potatoes. "The whole thing was extremely organic and took on a life of its own almost immediately," Balin said. She took on the role of a president of the organization and runs it along with Pasztor and Ahearn while over ten staff members have joined in as volunteers.

According to the group, the aim is to save over 10 million pounds of food and to achieve this task, Ahearn is hoping to raise over $250,000. Ahearn is of the belief that they need to refrigeration capacity on priority so that produces such as milk, eggs, fruits, and vegetables can be adequately stored before transportation. He had even planned to pull the plug on the operation after they reached 70 tons to spend time with his family, however, he believes he "can't stop" at the moment because he's doing great work.