The teen comedy aired on NBC for four seasons and will follow the lives of a group of six students. 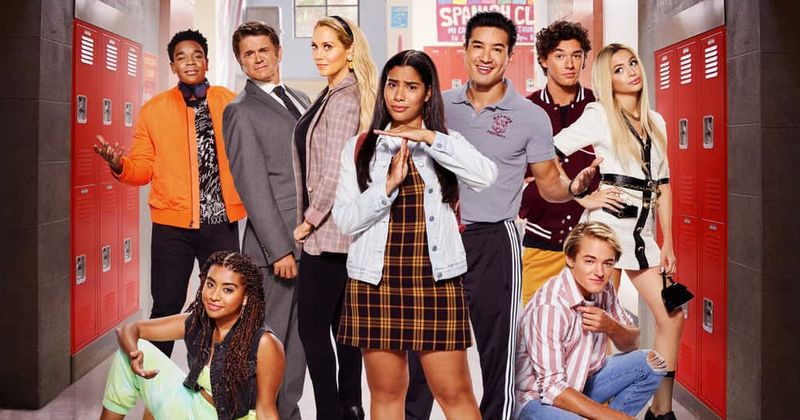 A wave of nostalgia is about to wash all over us as the reboot of Saved by the Bell is set to premiere today on NBC Universal's streaming service, Peacock. The reboot will see original actors Mario Lopez, Elizabeth Berkley, Mark-Paul Gosselaar, Tiffani Thiessen, and Lark Voorhies reprise their roles along with a host of new characters. The teen comedy aired four seasons starting in 1989 and followed Zack Morris (Mark-Paul Gosselaar), a scheming but charismatic student. The reboot will feature 10 episodes and will be available from Wednesday on Peacock. Much like the original, the series will follow a group of six students, half of them from an underprivileged school for which funding has been cut in a controversial move by Gosselaar's Zack Morris, who's now the governor of California. "We wanted to introduce a new cast but also give fun winks and nods for the true fan," said Berkley, reported People. "Saved by the Bell holds a special place in people's hearts. It's part of their childhoods, and that is sacred. We are all fiercely protective of that legacy." Lopez said they really had fun with the new direction of the sitcom. "It's a little edgier and updated, but not naughty by all means. It's a lot of fun," they said.

As the teaser trailer revealed, the iconic series kicks off in the present day in Bayside High. "Can you believe that was almost 30 years ago?!" says Jessie Spano (Berkley) in the initial teaser." Lopez's A.C. is Bayside High's gym teacher, and in the teaser can be seen hanging out with Zack and Kelly Kapowski's son, Mac Morris (Mitchell Hoog), and Jessie's son Jamie Spano (Belmont Cameli), who is also the captain of Bayside's football team. Berkley's Jessie stars as the mother of a Bayside student and a guidance counselor. Thiessen's Kelly and John Michael Higgins return to the show with the latter playing Principal Toddman. Lark Voorhies' return was under doubt until Peacock confirmed she would reprise her role as Lisa Turtle. "When the show picks up with Lisa, she is thriving with a successful career in fashion," confirmed Peacock in October. Dennis Haskins' beloved Mr. Belding and Dustin Diamond's Screech are not part of the reboot.

Waiting for Saved by the Bell to premiere on @peacockTV. #SavedByTheBell pic.twitter.com/LpqdxItetl

The new cast will feature as students at Bayside High. "The influx of new students gives the overprivileged Bayside kids a much-needed and hilarious dose of reality," read the show's synopsis. Josie Totah, Haskiri Velazquez, Dexter Darden, and Alycia Pascual-Pena will play some of the younger characters in the reboot with Totah, who's a transwoman, playing the lead role of Lexi, "a beautiful, sharp-tongued cheerleader and the most popular girl at Bayside High who is both admired and feared by her fellow students," noted The Hollywood Reporter.

If y'all wanna see a revival done right, watch the new #SavedByTheBell on @peacockTV. It's so damn fun, filled with POC and queer representation and it's just hella good. It also has Lil Yachty singing the theme song! YAY! #GoBayside pic.twitter.com/G6G7V2FS9p

"Growing up and seeing Saved By the Bell, it was so small and so quaint — this is like an enlarged version. It's still just as fun, just as campy, and it gives us kind of a '90s feeling back," said Totah. Velazquez, who also stars as one of the younger cast said, "You're getting reintroduced to that very nostalgic feeling, but also you're getting introduced to the new crew. Everything '90s is making a comeback — it never goes out of style."

Berkely is hoping fans of the original show can now enjoy the new version along with their family. "Parents who grew up with us will absolutely reconnect to their innocence (and) enjoy what this show has meant to them," said Berkely, reported USA Today. It's "something they can watch with their kids, the way I hear people (are) loving to watch 'Cobra Kai' (Netflix's update of The Karate Kid) ... There's something for everyone."