The teenager shared the photo last week to mark the birth of his niece, Grace Warrior Irwin, the newest member of the Irwin household. 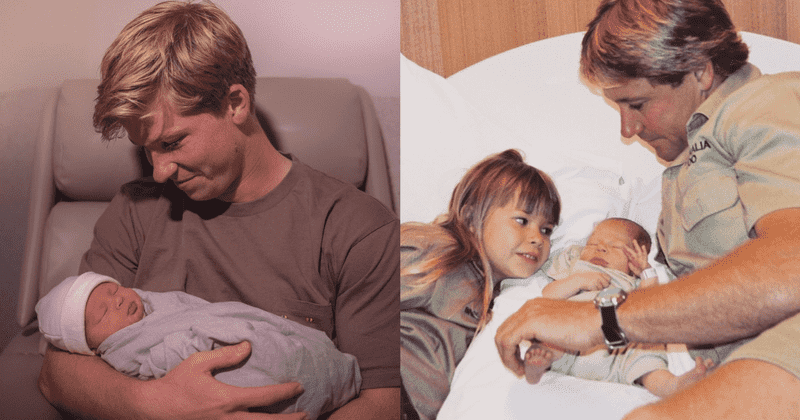 "Like father, like son," is by far one of the most used cliches we've come across. But, that doesn't make it any less true in this case, looking at how astounding the resemblance between the legendary animal conservationist Steve Irwin, and his teenage son, Robert Irwin. As proof of this, the Crikey! It's the Irwins star who posted a picture with his baby niece, Grace Warrior Irwin trying to emulate a picture of his father gazing at him lovingly when he was a toddler. "Let the uncle adventures begin!" Robert captioned the photo on his Instagram. "Love you so much, Grace ❤️ This little one picked the two best parents in the entire world," he added. "The most incredible, caring, and strong Mum... and the funnest, coolest and kindest Dad. Love you three so much - I can't wait for this exciting journey ahead!"

Grace Warrior is the newest member of the Irwin family and is the daughter of Bindi Irwin and her husband Chandler Powell. She was born on Thursday. While the birth of the baby is a story in itself, many on social media can't help but point out just how much like his father the boy is turning out to be. According to PEOPLE, the picture people are using to draw the conclusion date back to July last year shared by Robert himself for Bindi's 22nd birthday. In the photo, Steve looks at an infant Robert lovingly with Bindi in the frame seen looking at him in amazement. "Happy birthday @bindisueirwin ❤️ Thank you for being my best friend from the moment I entered the world," Robert captioned that post. "I'll always treasure the story of the first time you met me - it was around the time this photo was taken, just after I was born and you decided that it was your job to name me... and then promptly named me Brian! Dad then confirmed that my name was actually Robert but you still called me Brian 'for short!'" he added.

The picture isn't the first, and certainly won't be the last, to be recreated by the 17-year-old. Just over a year ago, the teenager shared a photo with a rescued Koala to recreate an iconic photo of his late dad, Steve Irwin—to hit us right in the feels. In the post, the teenager can be seen cuddling a koala bear wearing the trademark Irwin khaki outfit, immortalized by his father, and a leather watchband, again, just like Steve Irwin did. Both Robert and Steve show off their blond hair in their respective snaps graced by a green backdrop. The young Irwin's followers flooded the post with comments pointing out the similarities between the former wildlife expert and his progeny. "You look just like your father and have a huge heart like his," one said. "Golden memories of your papa", another wrote. "Genuinely thought you were your dad here. Love this photo", yet another follower admitted.

In another instance from July 2019, the teen displayed his crocodile hunting skills as he took to feeding Murray - a giant crocodile - in front of a packed audience at the Australian Zoo just like his father did 17 years ago. Robert posted the picture on Instagram with the caption: "Dad and me feeding Murray... same place, same croc - two photos 15 years apart." He followed the post up with a heart emoji. His mother Terri commented added: "Steve’s mission is in good hands." A Reddit user, wrote: "He's a reincarnate of his father!"