Steve Irwin's children Robert and Bindi Irwin have followed in their father's footsteps into wildlife conservation. 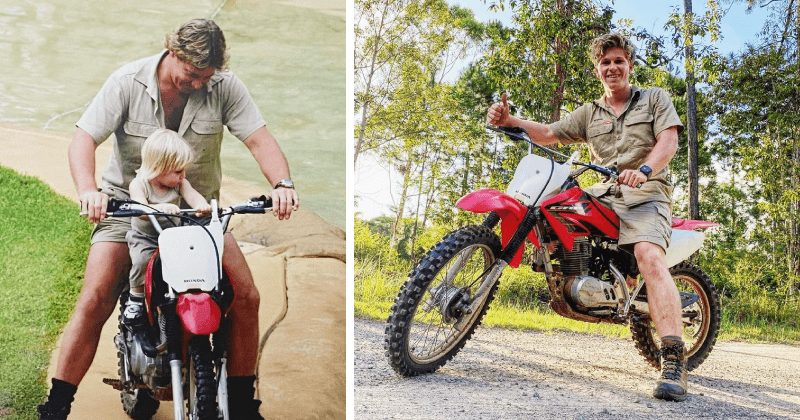 Steve Irwin's old Honda motorbike is revving to go after all these years and it's his son Robert who's in the driving seat. Robert Irwin recreated an iconic photograph of himself on the motorbike, evoking a host of memories for those who adored Steve Irwin. The original photograph, taken in 2005 or 2006, showed Steve riding a motorcycle around Australia Zoo with his son, Robert, as a toddler, sitting on the bike.

Robert Irwin was also wearing the iconic khaki dress that was synonymous with his late father. Both photos were taken on the grounds of the Australian zoo.  "I have so many memories of Dad’s old motorbike — hanging on to the front with Bindi as we’d ride around the zoo with Dad. And now after being in the shed for a few years, it’s all fixed up and running again. It’s so special to be riding it after all this time!" wrote Robert Irwin on Instagram. The post garnered more than 325,000 likes with many commenting on how it evoked nostalgic memories of his father.

Robert Irwin was in the news earlier this year for winning the Natural History Museum’s Wildlife Photographer of the Year 2020 People’s Choice Award. His image of a drone shot of a bushfire front in the Steve Irwin Wildlife Reserve in Cape York stood out as "stirring and symbolic," said Natural History Museum director Doug Gurr, reported The Sydney Morning Herald. Irwin has been passionate about photography since he can remember, having picked up a camera at the age of 6. The 2019-20 bushfires cause considerable damage to the zoo, with their hospital also tending to animals that were affected by the fire. "People were literally dumping trailer-loads of koalas with horrific injuries at the wildlife park," recalled Irwin. "It was one of the most devastating things I’ve ever experienced, absolutely horrible. What used to be a beautiful Eucalyptus forest was just nothing, a moonscape." He said the world needed to talk about climate change. "Sometimes after a big disaster like this people will say, 'Now’s not the time to talk about climate change, we just need to focus on the fires,'" said Irwin. “I don’t agree with that. This is the time to really start a wider discussion.”

Irwin said he almost ran out of battery when the award-winning image presented itself before the wildlife conservationist. Irwin said he "happened to have my drone up and I was struck with the contrast, one side this beautiful lush bushland and the other side was black, completely burnt out, just ash. With just a few minutes of battery left, I knew I had to just take a quick shot. This tells the most important story." His image was chosen as the winner from 50,000 entries from around the world.

Robert Irwin and his sister Bindi have followed in their father's footsteps. Bindi Irwin was 8 and Robert Irwin, 3, when their father passed away after a stingray fatally struck him on the chest at Batt Reef in Queensland, back in September 2006. Both often recreate pictures involving their dad and it always gets us emotional. As we reported, in 2019, Robert Irwin recreated an iconic photograph of his father feeding a crocodile. Fifteen years from the original photograph, Irwin could be seen wearing the same iconic khaki-colored shirt and shorts that his father was known for, as he fed the same crocodile, Murray, at the Australian Zoo. He posted the picture on Instagram with the caption: Dad and me feeding Murray... same place, same croc - two photos 15 years apart. He followed the post up with a heart emoji. His mother, Terri, commented on the post: Steve’s mission is in good hands.

The act did take a lot of courage from Steve Irwin’s 15-year-old son as Murray is considered the most dangerous crocodile in the Australian zoo. Irwin can be seen standing dangerously close to the crocodile, just like his father. But if anything, the crocodile has only gotten bigger in 15 years, making the act even more daring. Robert Irwin is a spitting image of his dad.