The doting father explains that he is respectful of others when using the ladies' room. 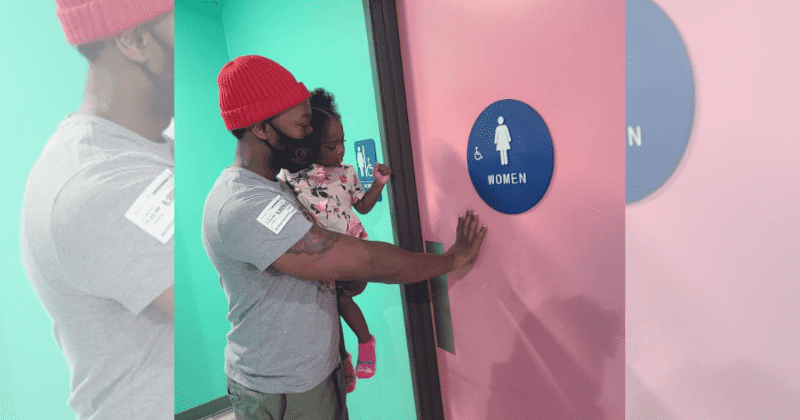 Muhammed Nitoto saw nothing wrong with using a public men's toilet for years until he became a father of two beautiful girls. In a now-viral post, the resident of San Pedro, California, admitted that the men's bathrooms are "disgusting," according to Good Morning America. That's why every time Nitoto is out with his daughters now, he uses the women's restroom in the absence of a family toilet. Speaking out about his decision in an Instagram post, the doting dad explains the rules he has made for himself to remain respectful of others while using the bathroom. He also lays emphasis on the importance of creating a safe environment for anyone visiting the washroom in his presence.

As a dad being out with daughters I never thought the bathroom would become as big as an issue as it is, he writes. Nitoto, then explains how many fathers are left with no choice but to use the men's washroom when they are out with their kids due to a lack of family bathrooms, which allows parents to use it with their kids irrespective of their gender. Usually, we would go places and they have FAMILY bathroom which are meant for people with children but what I found was most places don't have them and Dads are left to decide between taking their daughters to the men's bathroom or the women's.

But after his first visit to the men's room accompanied by his daughters, the father realised just how filthy it really is. Now when first hit with this choice I did what most men would do which is, I went to the Men's bathroom. Now I've been to a men's bathroom millions of times but walking in with your daughter makes you look at it completely different. Men's bathrooms are DISGUSTING, continues the post. Describing the unacceptable arrangement in the toilet, he says, They smell like pee and nothing is set up for a woman or a person with a child. The changing table was right next to the urinal which means my child literally would be next to where men pee which she's being charged. Not to mention that there are men going in and out while you're in there.

Just one horrific experience was enough for Nitoto to be dissuaded from taking his daughters to the "men's bathroom again." I use the women's bathroom when I'm out with them. They are too young to go on their own so I have to go in with them, he explains. Despite it being the only hygienic choice, the considerate man is careful not to make others present or entering the toilet uncomfortable. I try to be as respectful to women as I can while doing so which consists of knocking on the door before entering and announcing myself. Making sure if someone is inside that they know I am a Dad coming in with his daughter and making sure they are comfortable with that, he says of the rules he had made for himself.

Now once inside our stall, I still am aware of the door and whenever I hear it open and someone new is coming in I announce myself again and make sure they know I'm inside with my child so that they aren't surprised, he continues. For now, this system seems to be working well but it could surely upset some. Nitoto knows that "women's bathrooms are so much cleaner and setup perfect just in case they have children. The changing station is usually inside a stall instead of just in the open and it's always clean." Thus, he is willing to risk his presence just for the sake of his daughters' safety. As a girl dad, I can't help but want to protect my daughter's from all things that aren't for them and the men's bathroom is 100% one of those things. Am I the only one? Ladies, how does this make you feel?

Most people in the comment section were absolutely smitten by the dad's courageous initiative. I had a father announce himself while I was using the restroom once. I thought it was great. I was happy to see a father taking his daughter to use the women’s restroom. I appreciated him announcing so I wasn’t surprised coming out, but I was not bothered by it at all. It made me proud and I knew that was a lucky little girl to have a dad that felt comfortable enough to do that and care to do that for her, wrote one user. Another noted the importance of family washrooms in public spaces. That's totally #dadgoals as far as I am concerned. I think its great and you are handling it perfectly. And there should be waaaaaaay more family bathrooms in public. 👍 they expressed.