Heartbroken Dog Gazes At The Sky After Losing Entire Family In Car Fire, Waits For Family Who Will Never Return

Rowan Baxter, 42, killed his wife Hannah and their three children; their family dog has been taken in by a trainer Dave Kramer (pictured below) who worked at their gym. 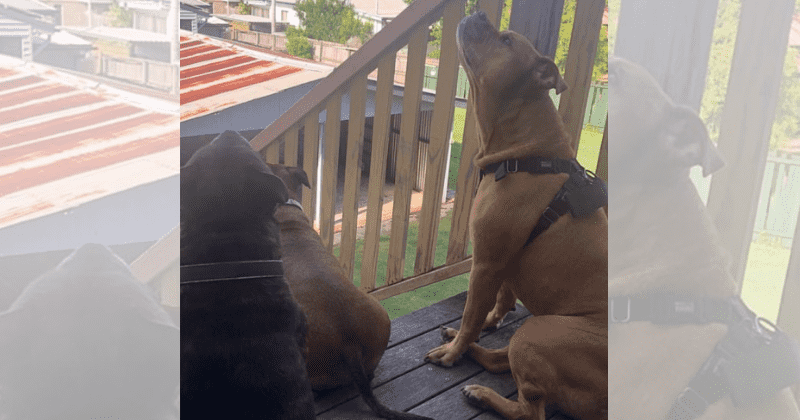 Tragedy struck the Baxter family and they died in a horrific fire leaving behind their pet dog Savannah. Hannah Baxter, 31, and her children were killed on Wednesday believed to be done by ex NRL player Rowan Baxter, 42, according to The Daily Mail. A trainer who worked at Rowan Baxter and Hannah Clarke's gym was quick to rescue Savannah when he heard about the news. Dave Kramer shared an insta-story of the sweet dog captioning it: She's made some new friends after losing everyone she loves. She's seen with  Kramer's two other dogs.

According to the BBC,  it is not confirmed if Rowan Baxter set the car alight in Brisbane before stabbing himself to death. But there have been reports of domestic abuse. Prime Minister Scott Morrison said, "Australians all over the country are just shocked, saddened and devastated about what has happened in a suburban street. Hannah and her three children [were] so senselessly and maddeningly murdered in what has occurred in a terrible act of violence," he said. "There's a rising sense of anger in this day and age [that] the scourge of family and domestic violence still can lead to the death of five people," said Det Insp. Mark Thompson.

NO! A man burned his children and his wife alive today. He took the gutless way out and stabbed himself outside the car. Hannah Baxter survived, knowing her children died in the fire and then later died from her injuries, agony knowing her children were dead, agony from her burns https://t.co/SkdjMui9Qp

The Daily Mail reported that Aaliyah, 6, Laianah, 4, and Trey, 3, died in the inferno while Baxter, 42, who was badly burned, stabbed himself to death next to the burning Kia Sportage on Raven Street in Camp Hill, Brisbane, on Wednesday morning. After a recent assault, Baxter was not allowed to be 20m near his wife. "We still don't know how he got so close. He's obviously ambushed her somehow, I'm sure she would not have stopped for him, she would be more likely to try to run over him," Mr. Clarke said. "He had to hurt us because we'd beaten him. He was spiraling and had run out of people to sponge off. Looks like all of a sudden he decided there was only one way out." The couple believed Baxter hacked her phone and was obsessively tracking her phone and location. "He was going through her phone and tracking her whereabouts. It was really scary," Mrs. Clarke said. During the terrifying incident, Hannah managed to free herself from the inferno screaming 'He's poured petrol on me' according to witness accounts.

Dave Kramer broke down as he visited the scene of the tragedy, with Savannah, on Thursday. The trainer at the Baxter's Integr8 Fitness Gym and a close friend of the family also paid tribute to his murdered friend and her children. He mentioned each victim personally in his emotional tribute. He started off by writing: I still don’t want to believe it. But as I wake up this morning with their family dog laying in my bed, I realize this isn’t just a nightmare, and all I can do is lay here, cuddle her and cry. By the end, he shared helplines for domestic abuse victims.

The horrifying story has spread across the world. Many users online criticized media outlets for not calling out Baxter as the killer.  @sarahinthesen8 tweeted: It’s hard to explain how much the horrific murder of Hannah Baxter and her children is haunting me. A young mum I never met and a family I have no connection to. But the brutality of this is sickening. The media reports glorifying the man who killed them is disgusting. @theaviator1992 wrote: Did a quick review of international headlines, found New Zealand are the only market reporting this for what it was. Murder. Thank you @nzherald for being an example for the rest of the media. #HannahBaxter

Really impressive resource links & advice at the end of the article, too. Should be adopted as common practice in Aus.

According to the NZ Herald, the slain mother's sister-in-law Stacey Roberts said Hannah Baxter's parents had "exhausted themselves" trying to "help Hannah escape this monster" and asked for donations to help cover funeral costs via a fundraiser. "For all those who knew Hannah or had even just met her once would know how much of a beautiful soul she was, her children were her life. All she ever wanted was happiness. Her children were only a reflection of her," Roberts wrote on the page. "We will miss them all more than anything."

i’ll bet anything this guy had CTE