The piece of jewelry is one of the Queen's favorites and has been in use for over seven decades. 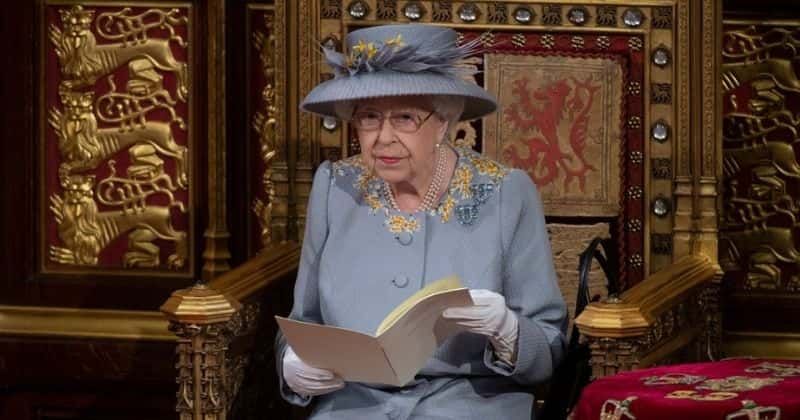 Queen Elizabeth was spotted wearing a pair of aquamarine brooches to the State Opening Of Parliament recently and it seemed like she was carrying a piece of her family with her. The vintage piece of jewelry was gifted by her parents when she turned 18, and since then, Queen Elizabeth has worn it on several occasions. It's safe to say that these art deco-style Boucheron clips are one of her personal favorites. The brooches are made of aquamarine and diamonds, and in a typical 1940s design, combine baguette, oval, and round stones, according to Daily Mail. In May 2020, to celebrate the 75th anniversary of VE Day, the Queen chose to wear her aquamarine clip brooches.

While the day marks the end of the Second World War, the Queen also honored her late father, per Town & Country. "I speak to you today at the same hour as my father did, exactly 75 years ago," the Queen said. "His message then was a salute to the men and women at home and abroad who had sacrificed so much in pursuit of what he rightly called a 'great deliverance.'" Later, she added, "As I now reflect on my father’s words and the joyous celebrations, which some of us experienced first-hand, I am thankful for the strength and courage that the United Kingdom, the Commonwealth, and all our allies displayed."

The Court Jeweller confirms that the Queen does have about seven aquamarine brooches alone that are a part of her brooch rotations, but this classic diamond and aquamarine clips have been in use for over seven decades. Many people confuse these clips to be Cartier as the style is similar to what the brand often uses, but these clips can be worn in a number of different ways: as matching clips on either shoulder or as a single brooch. The Queen mostly wears them as separate clips, one above the other, on her left shoulder. To enhance the natural color of the stones as they are translucent, the brooch is often paired with blue or pale purple fabrics.

Queen Elizabeth II is the only living Head of State who has served in WWII. pic.twitter.com/hKNA6ciC8J

The recently widowed Queen sat alone, with the consort's throne —previously occupied by the Prince of Wales—removed from the State Opening of Parliament ceremony for the first time in 120 years.  But, during the ceremony, Prince Charles sat with the Duchess of Cornwall on chairs of state, which were placed to the side. On April 17, 2021, the matriarch of the British Royal family laid her husband to rest with a touching letter she placed during the Duke of Edinburgh's funeral at St. George's Chapel at Windsor Castle. Photographs from the event revealed Prince Philip's coffin had a wreath and the handwritten note from his beloved wife.

For once in my life I am struck for words watching Prince Phillip’s funeral! The Queen sat on her own in St George’s Chapel 💔 #RIPPrincePhilip #PrincePhilipfuneral pic.twitter.com/GIzyFNL2Vc

The prince's passing has meant that Queen Elizabeth II will no longer be with her "rock" by her side after over 73 years. Addressing the "huge void" the death has left in the queen's life, her son Prince Andrew said over a week ago that he feels "very sorry and supportive" of her. He shared, "She described it as having left a huge void in her life, but we, the family, the ones that are closer, are rallying around to make sure that we are there to support her, and I know there's a huge amount of support not just for her but for everybody as we go through this enormous change."

Today I watched Prince Phillip Funeral & I felt that great loss. HM Queen Elizabeth my heart is bleeding 🩸 for your loss @RoyalFamily Prince Charles, Prince Harry, William, Kate, Andrew and all the grandchildren, Princess Anne. I felt today the same way I did when I lost my Dad. pic.twitter.com/lKYHfrvpIc