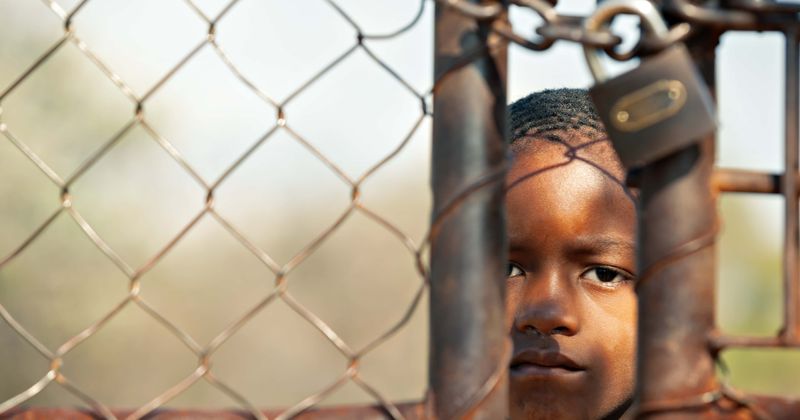 Trigger Warning: This story contains details of racial discrimination that may be disturbing to readers.

Principal Ed Roos, a school custodian, and a few other staff at View Ridge Elementary School forced Jaleel,  a young student to stand outdoors, barefoot, in a fenced play court. This incident occurred in June 2019, but unfortunately, this wasn't the first time it happened. According to KUOW,  Jaleel had been placed in this enclosure, otherwise called “the cage” by school staff members, on several occasions. He was even made to stay there the entire day at times. This was something others in the school knew because teachers would walk past him and students would play around him while he sat there in the cage.

A Washington woman filed a lawsuit against an elementary school on Sunday, alleging staff repeatedly locked her 8-year-old son in an outdoor enclosure during the 2019 school year.

However, no one did anything about it. Now, per Crime Online, the boy’s mother, Janelle Williams, is seeking unspecified monetary damages from Seattle Public Schools, claiming her son remains haunted by the ordeal even though he no longer goes to the elementary school. The mother also added that this incident sheds light on how Black children are discriminated against in schools. "I don’t care how upset I get at my baby. I’m not gonna go and lock him in the damn closet," Williams said. As an African-American woman, she said, "If I was to lock my son up in a closet, they’d be quick to call CPS on me. So why is it that y’all can lock my son up?"

Janelle Williams said she believes other parents did not come forward for fear of retaliation. However, Rosenberg revealed that he is fielding additional abuse allegations from parents whose children also attended View Ridge Elementary School.

Jacquelyn Flaherty, a kindergarten teacher, witnessed the shocking incident. "I have never seen, in all these years, a child being locked into an area like that," Flaherty said. "It was like a cage." Flaherty was shaken by the incident because he was one of the very few Black kids in the school, and she was the only Black teacher there, too. Months after the incident, in August 2019, Flaherty filed a discrimination complaint against Principal Roos. Almost a year later, in October 2020, the investigation was completed, and it was concluded that Roos violated district policy in Jaleel’s case by failing to record and report the isolation incidents.

While the school district’s investigation did not determine how many times he was locked in the fenced enclosure, the news outlet reported that staff — including the principal — said it happened multiple times during the spring of 2019.

The investigation couldn't determine how many times Jaleel had been locked up in the cage, but Roos and other staff members revealed it's happened several times, but stated he was put there for 20-30 minutes at a time.  Roos told the investigator that it was "an excellent place for him ... a calming area." Roos said that Jaleel would cuss at staff members, but this place served as "a safe place for him to use inappropriate language." Jaleel allegedly also had a habit of escaping from the school building. Dorr Anderson, an instructional assistant, clarified Roos's statement and said he had spent at least two full school days in the fenced-off area with Jaleel.

Janelle Williams’ attorney, Seth Rosenberg, told KUOW that the cage Jaleel Williams was locked in appears to have only been used for one child.

Sometimes Jaleel was kept there against his will, but Anderson noted that Jaleel had expressed it was his preferred area as he "realized that if he got to spend all day in there, he didn't have to do schoolwork. He got to play with balls, and got to spend time with a preferred adult." Kristen Eckert, the assistant principal said Jaleel was given his lunch while he was in the cage and he sat on the floor to eat because there was no table or chair in the court. Aaron Larson, one of the school custodians at the time said they were uncomfortable following orders to lock him up in the court that was only used for him but didn't know how to say no.

A GoFundMe page stated that Janelle Williams and her four children (https://t.co/IXRNfW4Y9a) were living at a domestic violence shelter while they fled from the mother’s ex, who allegedly abused them.

"The idea of trapping a child in that kind of environment just screams all the wrong signs," Larson said, during an interview. The investigation found that no one at the school recorded any of Jaleel’s isolation incidents. A GoFundMe page reveals that Jaleel comes from an abusive home and he was living with his mom and three other siblings at a domestic violence shelter while they fled from the mother’s ex. The fundraiser "is an effort to raise funds for the Williams family to find housing and support their living expenses for a year. Meanwhile, Jaleel’s nightmares about being caged led to his admission into a child’s psychiatric hospital in December."

The lawsuit alleged that Jaleel Williams, who is Black and homeless, was treated differently than other students in the mainly white, wealthy school.

Jaleel confided in his mother that he was scared when they locked him up. "I honestly started crying, because I was just like, 'What in the world?'" Williams said in an interview. "I was thinking about how scared he was with no one to advocate for him. It’s heartbreaking." Williams confronted Roos about locking her son in the fenced play court but was disregarded. She said, "I’m made to feel like I’m not knowing what I’m talking about because I don’t have a degree." Several teachers reportedly approached Roos about this inhumane method, suggesting he use an empty classroom to isolate him instead of doing so in front of the whole school.

The boy’s mother, Janelle Williams, is seeking unspecified monetary damages from Seattle Public Schools, claiming her son remains haunted by the ordeal even though he no longer attends the elementary school.

In a written statement, the district said "these incidents of bias and mistreatment of our students aren’t new – for many years, the district has heard the painful stories from families and students. What has changed is our district’s HR response and a superintendent and school board who are committed to accountability and taking swift action." Despite the complaints and the investigation, Roos remained on the job for more than a year, until this November. "It was because it wasn’t clear until well into the investigation that the doors to the play court had been locked, and the child had been served lunch in the enclosed area," said district spokesperson Tim Robinson. A while ago, Roos resigned as part of a settlement agreement with the district.

Principal &#39;locked black special needs student in cage like an animal in the zoo&#39; https://t.co/VL7H1enGNE via @MetroUK

Williams isn't happy with the resignation and wants the district to look at everything that went wrong in her son’s case, including staff members who saw Jaleel locked up, turn a blind eye. "This is a huge failure in so many parts of the system," Eliza Rankin, Seattle School Board member, said during an interview. "That there was a policy that allowed anything like that to happen is a failure," Rankin said. "That we have people in our buildings who think it's okay to do that to kids is a failure. That so many people saw what was going on and felt like something was wrong and didn't know what to do is a failure," Rankin said. "It’s really fucked up."

Janelle Williams told KUOW that her son is seeing a behavioral therapist at his new school, but the district is planning to stop the meetings because the therapist is unable to provide transportation.