A wreath had been kept aside for Prince Harry by the organizers. However, palace officials decided against using it in the ceremony. 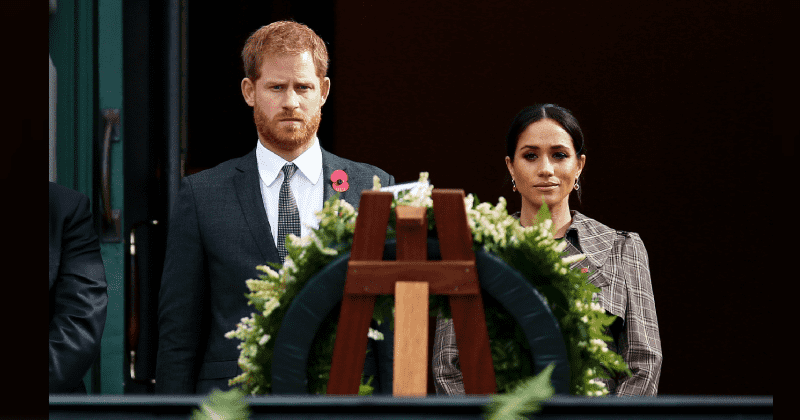 Prince Harry was reportedly "saddened and disappointed" after the royal family declined his request for a wreath to be laid on his behalf at the national memorial in London on Remembrance Sunday, reported People. Remembrance Sunday recognizes the 1918 armistice that ended World War I and honors those who were killed and wounded in the war. Reports suggested that a wreath had been kept aside for Prince Harry to be laid at the Cenotaph by the official organizers of the event but it wasn't placed on his behalf, along with the rest of the royal family. Prince William and Prince Charles was part of the official ceremony headed by Harry’s grandmother, Queen Elizabeth. Courtiers and palace officials decided against keeping a wreath on Prince Harry's behalf as he and Meghan Markle were no longer working members of the royal institution.

A source close to Prince Harry told People that he was "saddened and disappointed by the decision,” despite being aware that he had renounced his standing in the royal family. Prince Harry himself served in the Army for 10 years and had on two tours in Afghanistan. He had risen to the rank of Captain, in the army. The Sun had published the image of the wreath that had been kept side for Prince Harry but wasn't ultimately used. The picture showed the unused wreath lying in a factory in Kent during the official ceremony. It is learned that the Queen wasn't consulted on the decision about keeping a wreath on behalf of Prince Harry. The Queen, 94, watched the ceremony from the balcony along with Kate Middleton and Camilla, Duchess of Cornwall.

Meanwhile, Harry and Meghan held their own ceremony in Los Angeles early on Sunday as they placed flowers picked from their garden in Santa Barbara, California at the gravesites of two soldiers who fought for Commonwealth armed forces. One of them had served in the Royal Australian Air Force, while the other was from the Royal Canadian Artillery. The obelisk in the cemetery that features a plaque with the inscription “In Memory of the Men Who Offered Their Lives in Defense of Their Country.” Prince Harry laid his own wreath, featuring a message from him, reading, "To all of those who have served and are serving. Thank you"

Prince Harry spoke to the Declassified podcast and revealed that he still continues the British tradition of wearing a poppy in tribute to veterans and for “the soldiers I knew, as well as those I didn't. The soldiers who were by my side in Afghanistan, those who had their lives changed forever, and those that didn't come home.” Prince Harry said the Remembrance Day represented a moment for respect and hope. "Even when we can't all be together, we always remember together," he said on the podcast. "Respect for those who came before us and hope for a safer world." Meghan and Prince Harry wore masks and removed them only when they were on their own. According to E Online, the pair's spokesperson said they "privately visited the Los Angeles National Cemetery earlier today... to pay tribute to those who have served and to those who gave their lives."

The couple had moved to California earlier this year after renouncing their senior titles. "After many months of reflection and internal discussions, we have chosen to make a transition this year in starting to carve out a progressive new role within this institution," read a joint statement released by Meghan and Harry at the time. "We intend to step back as 'senior' members of the Royal Family and work to become financially independent while continuing to fully support Her Majesty The Queen."

Prince Harry and Meghan have marked #RemembranceSunday by visiting the Los Angeles National Cemetery today. The Duke and Duchess of Sussex wanted to “personally recognise” the day in their own way. pic.twitter.com/jFRr3RPbRv