trending celebrity people lifestyle news animals
This Pooch Was Shot 17 Times, Blinded, And Had Her Ear Cut Out. Now, She's A Therapy Dog

This Pooch Was Shot 17 Times, Blinded, And Had Her Ear Cut Out. Now, She's A Therapy Dog

Maggie, 5, was found in Lebanon riddled with gunshots and abandoned in a box. She was soon adopted by a family in the UK and her story has gone viral on social media. 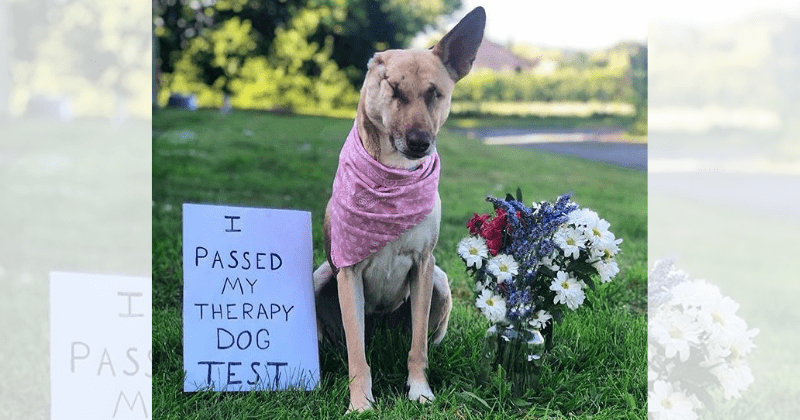 Maggie, a resilient dog, who survived 17 gunshot wounds all over her body, her ears being cut off and being tied to a box and left to die in Lebanon, is now a certified therapy dog. Who better provide comfort for the distressed and needy than a dog who has gone through so much in her short life of 5 years? She was finally adopted by a family in Brighton who shared her story on social media, that has since gone viral. Kasey Carlin, 25, is Maggie's new owner and heard about Maggie’s story through the Wild At Heart Foundation, an animal welfare group, and she knew she had to get her home.

Maggie is the miracle dog who survived being shot 17 times. Since her move to the UK, Maggie has been training to become a therapy dog... pic.twitter.com/Z6qjs4dqCn

A picture of Maggie on Reddit with a post on her latest achievement has drawn thousands of comments and upvotes.  When she was found in Lebanon she was on the verge of death. An online campaign was started to get her out of the Middle East. According to Metro, Carlin said, "This person in Lebanon posted asking for help and a woman in London saw the post and got help. ‘Wild At Heart said they would take her in, even though it’s quite hard to get pets out of Lebanon. My mum saw Maggie’s post and said we had to foster her."

She added, "I got home and saw the picture and agreed. I was in tears when I met her at the airport." Before leaving for the UK, Maggie already had undergone surgery in Lebanon. When Carlin and her mother saw her at the airport, they realized how physically damaged Maggie was. Her spirit was however intact. The extent of her injuries was just harrowing. Her eyes had to be sewn to prevent infection and further damage.

Pretty soon, Maggie, who had the fighting spirit of a warrior, recuperated and was well enough to travel to the UK to meet her new family. Carlin said, "I got in touch with some blind rescue dog charities and ask what to do. They said map out the house for her room by room. But we sectioned off the kitchen and the first night she slept in her crate. I took her out to go to the toilet and it was the first time she touched grass." Because of her injuries, Carlin was often asked why she was not euthanized.

Many others question her quality of life. But when these same people saw Maggie happy and hearty, running around and enjoying her new life, they realized they were wrong according to Carlin. She said, "I’ve never met a dog like Maggie. She’s just brilliant. She’s so energetic and bubbly. She walks off the lead and follows me around. She must have been in agony with all she’s been through, but she never hurt anyone and she’s so loving."

To be certified as a therapy dog Maggie had to undergo training and she worked hard towards achieving this. She has inspired many with her story and a 'never say die' attitude. She would be taken to the University of Sussex campus twice a week and walked by students. And it was only a matter of time that she conquered even this task. Maggie has become so popular on social media that Carlin has devoted her full time in managing her social media accounts.

Carlin used to work at a dog daycare but quit because Maggie was getting so much attention. She currently has 30,000 followers on Instagram and several on other platforms.