According to the trio, they are in a committed relationship where they are all mutually attracted to women. 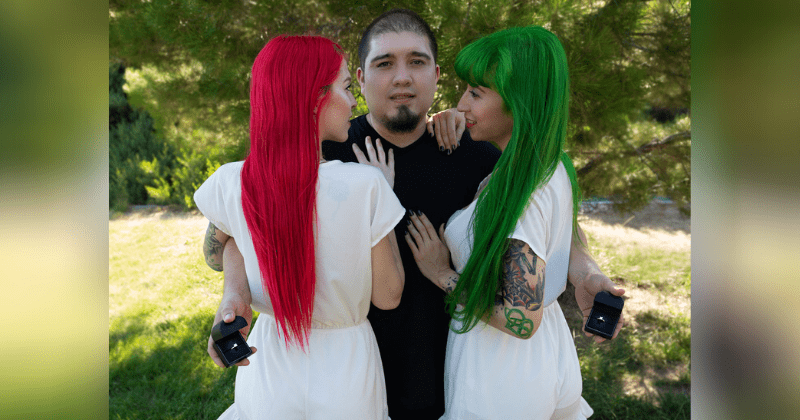 Polygamy is still a taboo subject, especially in most Western countries. This style of marriage has continued to be practiced in many parts of the world, and in a modern context, it is consent which matters. A polyamorous throuple are planning to start a family together and they hope that both women will fall pregnant at the same time. This relationship has 36-year-old Jimmy Silva married to his long term partners, ChaCha, 32, and Summer, 26. They want to get pregnant together so they can experience and go through the process at the same time. Speaking on a YouTube video that was filmed when the trio was on their 'pre-honeymoon', Summer asked: "Are we going to have babies after [the wedding]?", Daily Mail reports.

Please do a follow-up interview when the children are 3 years old.

That question did not take Jimmy and ChaCha by surprise as they said that they definitely would do it right after the day. Summer said: "Oh my gosh, that's crazy." Then Jimmy said: "I wanna get both of them pregnant at the same time. So it's a lot of work for me but I'll do it. Someone's got to do it here." Jimmy, who is a marketing director, had first met ChaCha back in high school, and the pair fell for each other instantly following an introduction by a mutual friend in April 2009. Their relationship continued to grow and intensify, and they met Summer three years into their relationship. The trio fell for each other and formed a close friendship too, before deciding to officially enter into a polyamorous relationship in December 2012.

More like bigamy if he married them, polygamy isn't legal in the US. Polyamorous suggests a civil partnership.

Later on, in 2018, their arrangement continued to grow stronger as ChaCha and Summer had begun to discuss having babies and settling down together. Jimmy got down on one knee and proposed in April 2019, which was the same day as their 10-year anniversary. They were a happy trio and the wedding preparations took six months to plan, with the three of them opting to go for the traditional ceremony in December 2019. At the wedding, both ChaCha and Summer wore the white gown with waist-length veils. Summer and ChaCha's families were supportive and attended the wedding, but Jimmy's family were not convinced of this arrangement and even threatened to disown him when he invited them.

He sure has a type! They’ll probably be fine.

According to Metro, they are in a committed relationship where the trio are all mutually attracted to women. Their fantasy is to include even more women in their love triangle and also have babies in the near future. Speaking after their wedding, Summer said: "The wedding prep was probably stressful for everyone but us. We had an agreement to make the day the best it could be and didn't let the little things get to us. We chose to take our own spin on a traditional ceremony and not see each other the night before the wedding. ChaCha and I didn't let Jimmy see the dresses either until the day of the wedding and that made the day really special for him because he felt that part was just for him."

Its a tough job but someone has to do it, hope they both look like him

She added: "We arrived, we all married each other in the presence of most of our family, we ate, we drank, and we danced the night away, it really was the most beautiful day of our polyamory relationship." Jimmy then said: "We are still very much open; if we find a girl, we all like and we agree to take her on a date, that's normally how it happens. We are mutually attracted to women and we are open to the idea of more women joining our love and our life. Our current fantasy involves one or more women being intimate with all of us at the same time."

They look really happy together. I hope everything works out for them.